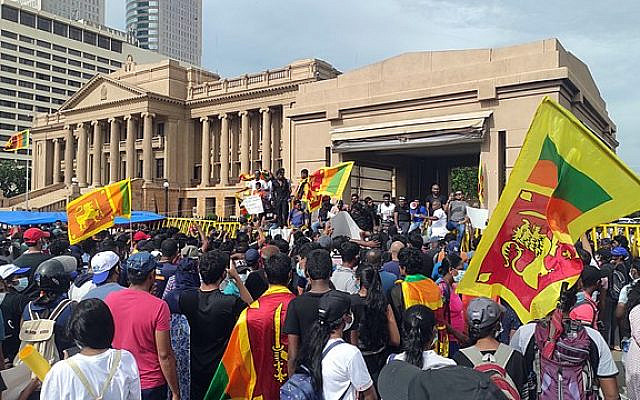 Sri Lanka is confronting a severe economic crisis which has brought its citizens out on the streets to protest against the calamitous shortages of essentials, food and fuel inflation and long power cuts. Recently, the protesters marched into the presidential palace in an attempt to show indignation against the Rajapaksa regime.

We all know that its economic woes stem from a balance of payments crisis, which has left it with limited foreign reserves to pay for fuel, food and other essentials. However, we must broaden our view to see that this is the first symptom of a disease that is yet to cover a major part of the South Asian subcontinent. While this view may appear pessimistic, it is, in fact, a reality check that India must come to terms with, in order to prepare itself to deal with entropies that may engulf the region in the next few years.

The chaotic views of insurrection in Sri Lanka can be attributed more to the economic distress than political unrest. While there is a limit to how India can interfere and repair the severe economic mismanagement in our neighbourhood due to sovereign compulsions, we can prepare ourselves sufficiently to ensure that the fire which the arsonists in these countries are inflaming should not reach our shores.

What should India do to adequately immune itself against the unceremonious upheavals in our neighbourhood (specifically, in Sri Lanka)?

First, India must quickly invest in ramping up its border infrastructure and modernize its border security forces, including the central and state agencies to ensure that the flood of migration does not create instability in our border states for the years (or decades) to come. Augment the capacity of your ramparts before you congregate at the bastion for an action.

Second, especially in the case of Sri Lanka, it is important to keep a check over rising sub-nationalist demands that may balkanize these states and create new challenges for India to deal with. We must be fully aware that in case of materialization of such a scenario, there will be cross-territorial implications to it. The regional parties in both India and Sri Lanka must be suitably coaxed in lieu of a future opportunity through constitutional means.

Third, the path of democracy and constitutionalism must be incentivized and any future negotiations with either the Indian government or multilateral financial institutions must be predicated upon the democratic structure of government. However, it is not an intransigent approach and it must be suitably amended in order to pave the way for new realities. We must start looking beyond “red, white and blue” shades of South Asia and reorient our policies to reflect the local understanding of the situation.

Fourth, a leaderless political mobilization makes it difficult to palliate the frustrations of general public, as seen in recent mobilizations in India too. Giving voice to a rational, credible and prominent face(s) may help in quickly dousing the flames. Of course, this needs to be backed by transfer of immediate financial incentives through the new leaders to cover the necessities and earn the goodwill of the local public.

Last, but not the least, it is important to appear non-interfering, non-aggressive and respectful of territorial integrity of the neighborhood state. The last thing we would want at such a critical juncture is to inflame passions of their people against India’s big-brotherhood and provide a vent to the local demagogues to drive upon those passions and assume power, rupturing the entire subtle efforts that we would be investing to stabilize the region.

The crisis in Sri Lanka may be the first, but it may not be the last in the region. Unrestrained economic mismanagement, derision of constitution, breakdown of democratic institutions and external interference has put the countries in South Asia on a path of political and economic collapse. India has a rough path to tread as it will have to balance out the opportunities and the vulnerabilities together without letting the latter overpower the former at any point of time. This balance must be maintained and supported by right messaging and independent policies which must appear to be magnanimous in character.

While we have been disproportionately focused upon the emerging ‘world order’, we cannot discount the possibility of an emerging ‘South Asian’ order. Resisting this churning may not be appropriate because we can stabilize this region through such manageable instabilities.

About the Author
Vivek Shukla is an opinion writer who shares his views on issues of current international importance on various platforms and fora. He can be reached on Twitter @tweetfromVivek.