JIMMY CARTER: POPULAR, BUT NOT AMONG JEWS 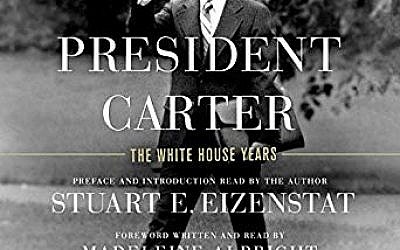 My sister lives in Atlanta and tells me former President Carter is held in high regard, but not among Jews. To us, Carter is a chimera. Carter is rated by YouGov as the 10th most popular public figure and 23rd most famous. 53% of the nation holds a positive opinion of him, while 43% are negative to neutral. Jewish emotions range from simmering indignation to curdling rage. Among my Gen Z international gap year college students, Carter is a cloudy antiquarian. Israel apartheid week on campuses and his repeated slurs against Israel the apartheid nation gins up Carter’s fame.

Some former presidents of the US fade into the night rarely making public appearances after leaving office. President James Earl Carter, Jr., who served as 39th president from 1977 to 1981, is one the most inexhaustible and prolific past presidents. He is a leading global advocate for issues he believes were left undone in his one term presidency.

People have strong opinions about his presidential effectiveness and persona. Author Stuart E. Eizenstat hasn’t changed my opinions of the president or the man but Eizenstat’s book is fraught with background. He gins-up my interests to know the “rest of the stories” behind world events during President Carter’s White House days.

President Carter: The White House Years, (St. Martin’s Press 2018), is a plodding read of more than 900 pages each filled with lots of print. It took me six weeks to finish the book despite skimming-over parts. Perhaps it is my unshakeable impression of President Carter that turns me off to anything admirable someone has to say about him?

The book is of classical importance to history buffs and teachers, diplomats, and politicians because Eizenstat reports meticulously recorded conversations with backdrop and context to their import. His writing is simple and forthright offers tantalizing possibilities for readers to comprehend the nuances of events shaping the world.

The book is an authoritative accounting about President Carter’s human rights agenda, the Egypt-Israel peace negotiations, Panama Canal negotiations, the Soviets slog in Afghanistan, the Iranian revolution, the fight to free Soviet Jewry, and stories about how and why Carter missed out on a second term. The book is Eizenstat’s memoir as much a biography of Carter’s term in office. Eizenstat cannot overcome his outsize rapture for being an insider in the throes of power as Chief White House Advisor on Domestic Policy. Eizenstat’s enthusiasm for almost everything is understandable but inexcusable. He demonstrates in the book he knows Carter, to paraphrase another author, “slipped and slithered steadily down in fetid foulness” of religious-based anti-Semitism, arrested development for the State of Israel, and a total lack of respect and cold-hearted attitude for Menachem Begin.

We Had Our Doubts

Carter’s fundamental religious beliefs framed his campaign, political and public policy decisions. That bothered a lot of us Democratic voters at the time. So did his rural, peanut-farming background. His homey Southern drawl made him sound like a supplicant rather than a stentorian leading light.

Our concerns all seemed to come true when the nation fell into deep domestic troubles under his watch. In the late 1970s, it was a struggle for us college graduates to find good jobs. Interest rates skyrocketed and mortgages were slippery. My 1981 home mortgage was made at an interest rate topping 14%, and I said, “thank you” to the one savings and loan officer willing to make the mortgage.

Eizenstat liberally paints Jimmy and Rosalynn Carters as gentle folk with no rough edges. They were inclusive at a time Southerners were predominantly still racists. Eizenstat pictures the Carters as loving, respectful, morally untainted, and idealistic. He and his sweetheart, wife and partner, Rosalynn, “disdained politics.”

The author admits others hold the memory of Mr. Carter as a “weak and hapless president.” In her Foreword to the book, Madeleine Albright sends kudos to Eizenstat for making “a compelling case that Carter’s four years in the White House deserve far more credit than he generally receives.” Senator Robert Dole is quoted echoing Carter’s diminished legacy that in time will be viewed more generously. Paul Volker’s words about Carter are hardly effusive when reflecting on “The Great Stagflation” during the Carter administration.

Eizenstat claims, though Carter was not a great president, “He has more than redeemed himself as an admired public figure by his post-presidential role as a diplomatic mediator and election monitor, public health defender, and human rights advocate.” Carter’s post-presidency television image to me is of a hammer-slinging builder of houses for the poor, and elder global advocate for human rights. Yet, 32% of the population in his home state of Georgia is living in poverty, and while Carter is building houses around the world, 28% of the poor in his state are children living in ramshackle, tarpaper & chicken wire shacks as I saw on a road trip across the rural South.

Eizenstat’s devotion and admiration seem untethered. First, his characterization of the Carters is not borne out by machinations reported in the book about early state campaigns for office and Carter’s run for Governor. Eizenstat relates how Carter purposely took actions to convince white voters he was giving short shrift to black community demands. He wanted to come across as a moderate. Carter visited a segregated academy with all its symbolism pledging support for all-white private schools. When asked his heroes, Carter never mentioned Dr. Martin Luther King. Carter extolled the value of ethnic and racial neighborhoods. He publicly promised whites not to use government power to “break up a neighborhood on a numerical basis or inject black families into a white neighborhood just to create some sort of integration.” He pridefully declared he was now able to win the governorship “without a single black vote” Eizenstat relates.

Second, Eizenstat is an Orthodox Jew and a heartfelt Israel supporter. His former boss carries on post-presidency mendacious attacks against Israel. Carter’s antipathy for Israel has created a toxic & demeaning environment coining the anti-Israel eponymous “the apartheid nation.” His attacks spearhead the global apartheid-nation movement that solely attacks Israel. Carter gives gravitas to the global rise in anti-Semitism perhaps as an unintended consequence of his fire hose torrent of accusations but for which he takes no responsibility. That’s how Jewish memory keepers will memorialize the Carter legacy and the man.

The third concern about Eizenstat’s devotion to Carter is revealed in his inside revelations about Camp David negotiations. The book is at its best in a thorough, detailed and enthralling retelling of behind-the-scenes conversations, strategies, and impacts of personalities, when President Carter dragoons Begin and Sadat into a peace accord. He tells about Carter’s “love affair with the Saudis.” Sadat is the “shining light,” peacemaker, friend and ally of Washington. Menachem Begin is an unbending, unforgiving, nationalist, himself a terrorist, and puppeteers of the American Jewish lobby. An exasperated Eizenstat writes, “The president’s lack of political sensitivity was sometimes breathtaking.”

Carter’s opinions and actions are anything but banal. They seem predestined by Carter’s spiritual religious fundamentalism. Eizenstat leaves the reader thinking the Jews never had a chance at a fair and impartial intercession with President Carter the linchpin in negotiations between Jews and Arabs.

Palestinians are a conquered and occupied, poor and downtrodden People for whom Christ would advocate, President Carter seemingly believes. The Palestinians want normal lives, “but the Israeli military treats them worse than the white police treat blacks.” The Palestinians “suffered for many, many years,” Carter tells Prime Minister Rabin, and deserve a “homeland.” In President Carter’s mind, the homeland is parity. He equates the statelessness of Jews, slaughtered by Christians, persecuted and expelled from nation after nation for 2,000 years with Palestinians displaced for six decades after losing repeated wars against the Jews. Palestinians cling to the hope of driving the Jews into the Sea. Other Presidents give away cufflinks and glasses aboard the President’s jet. President Carter gave special guests a “personally autographed Bible with ‘Air Force One’ embossed on the front.”

Eizenstat tells a story reporting how deeply felt, in his crevices and fissures, is his spirit and policies shaped by religion. President Carter is a sermonizer. Even as President, he loves teaching scripture and retelling Biblical stories. He told a Bible study group during a campaign about Christ driving the moneylenders from the Temple leading to Christ’s crucifixion. “There was no possible way,” Carter was quoted telling parishioners, “for the Jewish leaders to avoid the challenge, so they decided to kill Jesus.” That made newspaper headlines.

But Mr. Begin knew with whom he was dealing. His fierce visage of peace for Israel with Egypt was an irenic opportunity for long-term security. Egypt reclaimed its identity by forging links to the West through the negotiations and return of all of Sinai with its beaches and its gushing oil wells. Carter never got a Palestinian homeland or the Nobel Peace Prize awarded to Begin and Sadat; however, it was the

workaholic doggedness of Mr. Carter, and all three wives, who made peace a reality. Tens of thousands of Jewish and Muslim children are alive with no more war between Egypt and Israel leaving other Arab nations afraid to take Israel on alone.

Deep in negotiation with the Egyptians, Eizenstat relates scene after scene detailing Carter’s exasperation, frustration and downright dislike for Begin and his Jewish negotiators. Carter blamed the Jews but it was Carter who didn’t get it saying, “It’s hard to understand their motivation.” Carter never got it then or today.

About the Author
Dr. Harold Goldmeier is an award-winning entrepreneur receiving the Governor's Award (Illinois) for family investment programs in the workplace from the Commission on the Status of Women. He was a Research and Teaching Fellow at Harvard, worked for four Governors, and recently sold his business in Chicago. Harold is a Managing Partner of an investment firm, a business management consultant, a public speaker on business, social, and public policy issues, and taught international university students in Tel Aviv.
Comments