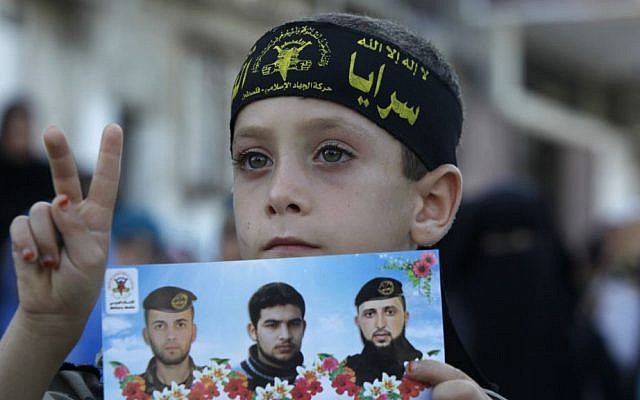 A young supporter of Islamic Jihad holds a picture of group members killed in clashes with Israeli forces, during a rally marking the 13th anniversary of the Second Intifada, in the Jabaliya Refugee Camp, northern Gaza Strip, on Thursday (photo credit: AP/Adel Hana)

President Trump says that he’s a businessman and doesn’t have a lot of patience so I’ll get straight to the point. There’s only one reason that there’s no peace between the Jewish Israelis and the Palestinian Arabs: they do not acknowledge that the Jews have the right to any nation state of their own anywhere in the Land of Israel. That’s it. That is the crux of the problem and until you solve that there will not be peace.

I moved to Israel in 1995 a starry-eyed, left wing, liberal Jew from America. I spent twelve years in four universities (Rutgers, Edinburgh, Princeton and the Hebrew University) studying towards a PhD in Islamic Studies. By 2005 my political views had changed 180 degrees. I thank Yassir Arafat and Hamas for that. All I wanted was peace. The Oslo accords were “the toothpaste that could not be put back in the tube” (as Shimon Peres said). But I was a naive fool. The Palestinians are not Mexicans or Canadians.

The Palestinians are endlessly indoctrinated to hate Jews. Have you ever wondered how much hate it takes to strap a bomb onto yourself and blow yourself up on a bus filled with Jews? How about running over a mother and her baby at a bus stop? Or going over to some random Jew and stabbing him or her on the street hoping to murder as many Jews as possible before you’re shot dead? That’s what the Palestinians have been doing for decades. There were bloody murders long before the state of Israel was established. This has nothing to do with the modern state of Israel or the Six Day War.

This is not a conflict between individuals. Put Jewish Israelis and Palestinians together without talking about “the conflict” and everyone will have a great time. The tension starts when you bring in “the conflict.” “The conflict” is a clash of ideas and perceptions of reality. There cannot be peace until the Palestinians, the Arab world, and the rest of the world accepts the reality that the Jews are no longer a wondering stateless people, but an indigenous nation with our own homeland, country, state, flag, language, history, identity and military.

This is not a religious war between Islam and Judaism. Islam is at war, but not with the Jews. They’re at war with the whole world and themselves. Islam means peace, but a very special kind of peace. Islam also means submission. When the whole world has submitted to Islam, there will be peace. So, you might hope that if we were to all become Muslims, at least then there would be peace. But, no, Muslims can’t decide which version of Islam is the real one: Sunni or Shia. So they continuously kill each other and have for 1400 years.

Supporters of the Palestinians say they need a “just offer” of peace; something real. Here is a list of peace offers, proposals, gestures and opportunities presented by Israel and/or the international community over the past one hundred years(!) that have all been rejected by the Muslim-Arabs/Palestinians:

The international community for decades has been saying they will impose a solution on Israel. They have threatened to internationally isolate Israel until it accepts whatever “solution” they force upon us. I would like to suggest an alternative. Sometimes when what seems obvious isn’t working the opposite will work.