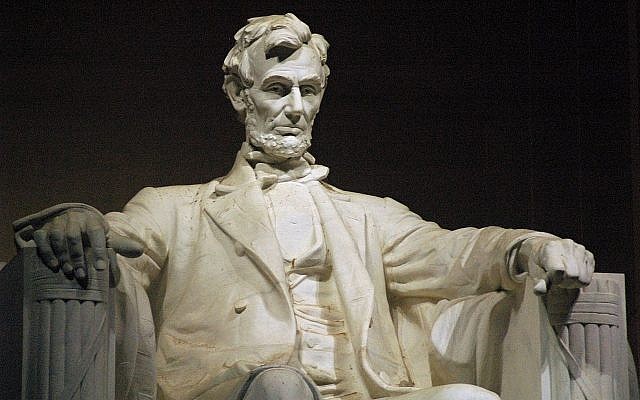 On Monday, at Shacharit services that begin at 8 in the morning, Rabbi Joseph Prouser will read from the Torah, as he does every Monday morning.

But because that Monday, February 18, also is Presidents Day, Rabbi Prouser will follow the Torah reading by reading the Gettysburg Address, Abraham Lincoln’s short, transcendent, beautiful, despairing, soaringly hopeful eulogy. Rabbi Prouser has translated it into Hebrew and set it to haftarah trope, so instead of reciting it he sings it.

It is never clear to me why it is so achingly moving to listen to that talk in Hebrew — so short, so direct, so rhythmic — only that it is overwhelmingly powerful.

Rabbi Prouser heads Temple Emanuel of North Jersey, a Conservative shul that was founded in Paterson in 1906. About 10 years ago, it moved the building that is its home today; it sits in Bergen County’s rural-ish (at least to these city-honed eyes) northwestern corner, high above one of the lakes that presumably give Franklin Lakes its name. The synagogue, once a Dutch Reform Church, is austere and old. To sit in it is to know that you are sitting somewhere. Somewhere real, with history behind it.

Rabbi Prouser gathers local politicians and other leaders — every year he puts together a pamphlet that includes quotes from presidents and other statespeople. Every year, the statements of genuine wisdom of generations of American leaders, interspersed as they are with the wisdom of the Jewish tradition, are both striking and nostalgic. It seems unlikely that any public figure now will be capable of the straightforward elegance with which their counterparts used to speak.

The service is always nonpolitical, or at least nonpartisan; both Democrats and Republicans come to it, and both Jews and non-Jews. Rabbi Prouser serenely soars above any more small-minded attempt to force comparisons between then and now; those who make them do so entirely on their own.

Whenever I go to Washington, DC, I trek to the Lincoln Memorial. I’ve read that it’s a sentimental building, that it jerks tears, but when I see it, those tears — which are entirely unavoidable — seen entirely organic. That huge statue of that morally huge man, with the visible bronze sadness that he could not avoid — he was a true Victorian, prone to melancholia, who had seen so much death, sudden and lingering, from disease and accident and war, some of it as a result of his orders — and the words of his second inaugural speech carved monumentally into the wall: all of it is so powerful.

When Rabbi Prouser chants the Gettysburg Address in Hebrew, he brings together all the strands — of striving toward what is right; of acknowledging the losses inherent to life; of understanding that decisions have consequences, and that sometimes those decisions are wrong; of trying to live with dignity and courage and decency and love.

Or, as Lincoln said in that second inaugural, “With malice toward none; with charity for all; with firmness in the right, as God gives us to see the right, let us strive on to finish the work we are in.”

We have much to do.

From out of Zion
Larry Yudelson

From the Berlin Wall to bagels
Joanne Palmer