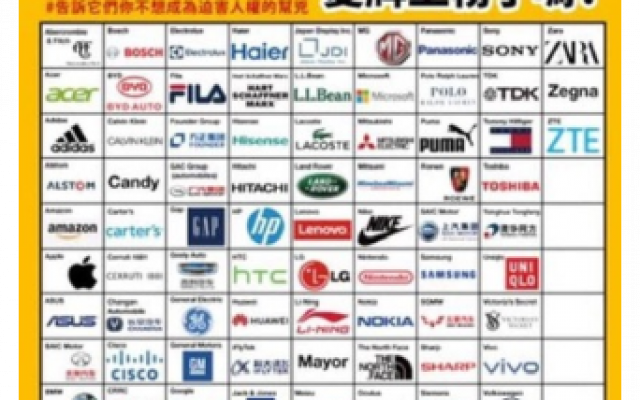 Be careful where you shop!

They came for the Youth and his friends on the street. He had no choice. Nor did those “approached” by officials at their impoverished farms, homes or jobs. They knew the alternative: camps, starvation, beatings. So, they were pressganged, 100,000 young men and women, flower of their generation, travelling across the mainland where the pestilence reigned, in the bitterness of winter, to work as slaves. Indefinitely. For promised wages or freedom that never came, members of a despised people, their disappearance from history planned by a Supreme Ruler.

A despised nation. Slaves. Pestilence. Bitterness. Supreme ruler. Is this a Pesach tale to get you in the mood? Yes and No! These young men and women are not Jews, they are Uyghurs, forced into slave labour across China, staffing factories whose Han Chinese workers are in lockdown to protect them from rampant COVID-19. Uyghurs are expendable.

Yet it is a Pesach tale because Jews are familiar with such things. Whether in Egypt or Germany, the pattern is always the same. First demonised (Bereshit 43:32). Subhuman. A fifth column (Shemot 1:10). Then wealth and businesses taken (Sefer Ha Yashar, Midrash). Remember Kristallnacht?  Their reproduction halted (Shemot 1:22; Shemot Rabah 1:12). Then slave labour for promised rewards (Sefer Ha Yashar, Midrash) or freedom (Arbeit Macht Frei) that never came. Finally, worked or beaten to death (Shemot 2:11).

In 1942, it was the Wannsee Conference. Now it is the “China Cables,” over 400 detailed pages planning to destroy Uyghur culture. Our “Yellow Stars” have been replaced by “Uyghur biometrics” (DNA, voice, iris and facial recognition.) For “Aryan ideal” now read “Han Chinese”.

After the holocaust we promised the dead and survivors, “NEVER AGAIN!” Faced with the biggest attempted genocide since then, with 3M Uyghurs in Concentration camps, how do we make good our promise?

Pesach’s a good time to ask. Uyghurs are treated as strangers in their own land since Mao’s 1949 invasion, because their rich religious cultural heritage has no place in a Chinese Communist Party hegemony. Our combined experience of being culturally different and enslaved in Egypt fundamentally shaped Jewish ethics in order to prevent such hegemony. We were  commanded not to “wrong or oppress the stranger” (Shemot 22.20), and  our first civil law drastically limited   slavery (Shemot 21:2,7-8,20; 22:2)  because we were both strangers and slaves  in the land of Egypt (Devarim 10.19; 15.15). Slavery was the socially corrosive antitheses of what Jewish society stood for. Thus, King Solomon’s use of forced labour, to build the temple, catalysed Israel’s ruinous split into two weakened kingdoms, later conquered and exiled by regional empires (I Melachim 5:27; Sacks:Covenant & Conversation, Terumah).

Ramban’s (12thC, Spain) commentary to Shemot 22:20 reminds Jews they know how enslaved strangers feel and that Hashem hears the cry of and avenges the cause of all such defenceless strangers.

So how do we, created in Hashem’s image, take up the cause of the Uyghur? Twenty years of engagement with China has not brought liberalisation but Uyghur Genocide, Hong Kong suppression, and a pandemic through flouting legally binding International Health Regulations. China’s highest moral goods are an individual’s “material wellbeing” and China’s restoration to their world leadership role removed by Western Colonialism. The only way to make China change course may be to strike at their prosperity, so their people seek change, and to shame them by removing prestige projects and positions.

At Pesach we ask four questions, drink four cups and describe four sons. So here are four things we can do at Pesach to help Uyghurs. Write to Parliamentarians. Boycott Beijing 2022. Be Careful Where You Shop. Write to Foreign Companies to leave China to avoid use of Uyghur Slave Labour.

WRITE TO PARLIAMENTARIANS (MPs, MKs) demanding a Uyghur Act restricting trade and collaboration with companies and institutions having critical roles in the Uygur suppression and enforcing Magnitsky sanctions against responsible officials.

Rene Cassin, the UN accredited Jewish Voice for Human Rights, has such a template letter (https://www.renecassin.org/wp-content/uploads/2020/02/China-Uyghurs-template-letter-to-Constituency-MP.pdf). It also asks for representations to the International Olympic Committee to remove the Winter Olympics 2022 from Beijing; to the UN to remove China from its Human Rights Committee; and to the World Bank to cease loans to China.

None of these strictures should be lifted until the camps are closed, all prisoners released, religious and cultural freedoms guaranteed by the Chinese constitution restored and Uyghurs can freely contact family abroad.

BE CAREFUL HOW YOU SHOP! The Australian Strategic Policy Unit found that Slave Labour has virally infected the global supply chain. At least 80 international companies are affected (photo). Supply chain audits are manipulated to hide this.

WRITE TO COMPANIES saying you will not purchase their product until they move their supply chain to Taiwan, South Korea, Japan, Philippines, Australia or, why not, Israel?! The international community needs to build up Australia, Japan, and South Korea as regional economic rivals to China.

The seder finishes with a children’s song, “Chad Gadya”, about a little kid goat, killed by a cat, who is  eaten  by a dog, who is beaten by a stick etc all the way up to the Angel of Death, whom Hashem finally kills. The little kid is the temple, centre of our religious culture, the cat the Roman empire, the other characters successive empires all of whom eventually end, leaving us free to rebuild our temple. Not a child’s song but an inspiring tale of hope! Recast this with Uyghur culture as the “little kid”, and China as the “Angel of Death”. If we really are partners with Hashem, then maybe  our four cups (Writing to Parliamentarians, Boycotting Beijing 2022, Being Careful Where We Shop, Writing to Companies to move their supply chains)  can help liberate the Uyghurs, restore their  culture, ending their slavery and discrimination, whilst we remember ours.

Now that, my friends, would be a real Korban Pesach!