Here we are, hurtling towards a third national elections in the space of twelve months. Two rounds of elections with inconclusive results, have numbed us and there will be a third. While politicians mouth platitudes about how it is madness when interviewed, they then go back and continue with their intransigent positions, perpetuating the inevitability of yet another election. The lack of a sense of public responsibility and respect for the will of the people by politicians who comprise the “bloc of 55”, is indicative of the corruption of our political system. This is Netanyahu’s lasting legacy. As they attempt to cling to the tassels of power, which is slipping from their grasp, as they try to defy gravity while they hang on, they refuse to acknowledge that they lost the majority in the last elections in September, and have taken to holding the entire nation hostage with their intransigence, thereby preventing the formation of a government which the majority of the people want, and catapulting us towards yet another election.

For 72 years, the proportionate representation system has worked. Now it is unraveling. The political extortion has reached levels which now threaten our democracy, when parties demand that in order to join the coalition, the independence of the courts must be sacrificed and subjugated to the legislative. Elected politicians feel no direct accountability to the public and express more loyalty to the party leadership, than the people who voted for them. And, as we have witnessed twice now, we have a fractured electorate, and narrow, sectarian demands of populist Knesset members who are more concerned with maintaining their seats, than the needs of the country. This situation is progressively creating election results which are stifling the efficacy of holding elections, as a surely as an anaconda squeezes the life out of its prey, slowly tightening its coils as it gradually crushes its bones and deprives it of oxygen. And, the prey tires of struggling. It loses its will to live and resigns itself to its fate. And so, we are resigned to more elections, even though none of us believes that the results will be any different. 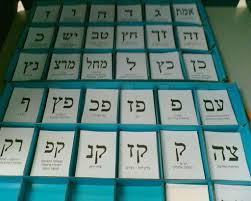 These, again? A third election? (Courtesy of Kol Berama)

The forthcoming elections, could have been avoided. One man stands between the Knesset being able to constitute a government and the waste of another two billion NIS, another six months without a national budget, the paralysis of national projects and the convening of the committee which decides which lifesaving drugs will be subsidized. One man.

Obsessed with remaining in power in order to leverage his position as Prime Minister so that he can impose his influence to postpone and delay the prosecution of the three cases of corruption for which he has been indicted (that’s if he cannot squeeze out immunity), he is holding the entire country to ransom. He is pitting citizen against citizen. He is undermining and inciting against the institutions of our democracy with wild, irresponsible “deep state” and conspiracy theories. He is rousing his supporters into a frenzy of outrage, directed at the Attorney General, the Chief Prosecutor, the police and the press, creating an incendiary atmosphere, which requires just the smallest of sparks to tip one incensed individual over the edge and commit a murderous act. Once considered inconceivable, “civil war” has become an ominous, if distant, possibility.

Ethical responsibility and accountability be damned, he will not leave. Defiant, desperate like a cornered, hunted animal (which he decries with wails of victimization), he will not go quietly in to the night. After 10 years in power, he has come to believe he is indispensable. He will not be Churchill. He will be Samson, and blinded by his self-righteousness, he will bring down the pillars which support our democracy with him, and upon our heads. 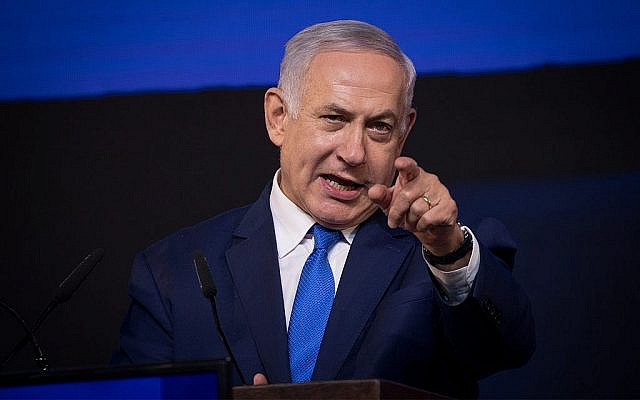 He is … creating an incendiary atmosphere, which requires just the smallest of sparks to tip one incensed individual over the edge and commit a murderous act. Prime Minister Benjamin Netanyahu addresses Likud supporters as the results of the Israeli general elections are announced, indicating that he has won reelection, at the party headquarters in Tel Aviv, in the early hours of April 10, 2019. (Yonatan Sindel/Flash90)

He and his loyal messengers, sent to lie on the barbed wire fence for him, never fail to remind us that he is presumed innocent until proven guilty, and that since the law allows for him to remain in office until there is a definitive court decision, he is entitled to do that.

Legally, perhaps. Ethically and morally, not! This is something I want to state clearly. The presumption of innocence before the law is not presumption for anyone to continue in their position – especially when that position can be used to influence the case, intimidate witnesses and destroy evidence.
Here are two examples why not:

A high ranking army officer, a brigadier marked for the rank of General and in command of the most volatile border, against the most immediate strategic threat against Israel, was investigated for sexual harassment and using his rank to elicit sexual favors from women under his command. Presumption of innocence applies to him, too. He was suspended from his command and was not allowed back, for fear of him using his authority to intimidate witnesses.
The mayor of a major city was investigated for, and later charged with accepting bribes and money laundering. From the first day he was investigated, he was distanced by court order and ordered not to enter the Municipality buildings, for fear that he might destroy evidence.
Here we have a Prime Minister, who throughout the investigation against him, has used his position to influence and hinder the investigation a number of times:

1. He has used his position to address the nation under false pretenses with “a dramatic message”, and then proceeded to undermine the public’s faith in the police and the Prosecution on a number of occasions. Especially immediately after the Attorney General’s announcements about his intention to indict, and then his decision to indict.

2. He has used his position to intimidate the Press and personally attack journalists, often bordering on defamation of character and incitement.

4. He has initiated and forced a change of the head of the Police investigation unit, Lahav 433, through the Internal Security Minister, in order to disrupt and perhaps sabotage the investigation against him. He also allegedly hired private investigators to follow the police officers investigating him, in order to find compromising material on them.

5. He has attempted through loyal proxies to legislate laws which would prevent an incumbent Prime Minister from being investigated while in office, thereby granting him immunity from investigation and prosecution – it failed. He did manage to pass a law which prevents the police and the prosecution from making public their recommendations after investigating an “elected official”, thereby denying the public the right to know.

6. After the February elections, he made it a fundamental condition in the coalition negotiations, that the parties support a change to the Knesset immunity laws, so that he could not be prosecuted. In addition, they had to agree to legislate a Supreme Court Override law, in order to ensure that the courts could not strike the immunity law down. These attempts only failed because he failed to form a government.

7. He dissolved the committee which decides whether he as Prime minister can solicit financial aid to pay for his lawyers, from private third parties with financial interests in the country (which places him in a clear position of conflict of interests), because they denied his request. Three times. He then appointed a State Comptroller with no legal background, who within one month of taking office, allowed him to receive a loan for this purpose from a cousin, who was also the same person who sold him at a generous discount, shares in his metal treatment company (whose product is used for making submarines, and sold its product to Thyssenkrup, from whom Israel later purchased submarines). This generated for Netanyahu a personal profit of 16 million NIS – and the Comptroller said nothing about conflict of interests.

8. He appointed a rookie back bench loyalist to Justice Minister during the period of a transitional government, who summarily fired the Ministry’s CEO, a lifelong civil servant in the ministry, and a consummate professional. The CEO chairs the committee which nominates candidates for the position of State Prosecutor, who would have a direct connection to the prosecution of his cases. Said Justice Minister has used his position to publicly attack the Prosecution and the Supreme Court, bodies which it is his responsibility to represent their interests and maintain their independence.

All these acts have one connecting thread: they are attempts by the Prime Minister to use his position and influence in order to evade prosecution and be forced to resign. They are precisely what suspension of people in authority suspected of wrongdoing is supposed to prevent.
And people still say that because he is innocent until proven guilty, he does not have to leave office, even temporarily? Spare me.