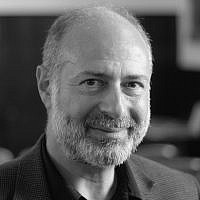 The Blogs
Fabian Hamilton
Apply for a Blog
Please note that the posts on The Blogs are contributed by third parties. The opinions, facts and any media content in them are presented solely by the authors, and neither The Times of Israel nor its partners assume any responsibility for them. Please contact us in case of abuse. In case of abuse,
Report this post.

As I was unable to contribute to the debate on anti-Semitism last week in the Commons, due to his role as a front bench spokesperson for the Middle East, he has released the speech he would have made if he was able to speak:

I have listened carefully to the excellent and moving speeches made by my hon friends the Members for Liverpool Riverside (Louise Ellman) and Stoke-on-Trent North (Ruth Smeeth) and I am horrified and angry that not only did the hon member for Liverpool Riverside  have to suffer the most distressing and horrific anti-Semitic abuse, but the misogynistic hatred directed at her only compounded the hurt and the abuse.  No member of this House should have to put up with any abuse, let alone the twin evils of those who hate both women and Jewish people.  Nobody in our society should ever suffer abuse because of who they are and how they have been categorised by others.  Anti-semitism must be stamped out wherever and whenever it rears its ugly head – we can never accept a society where such abuse is tolerated.

Many Jewish members who have spoken this afternoon have described their backgrounds and have told us of their family history, giving us all important reminders that so many citizens of this nation of ours come from many different cultures which I believe serve to enrich us all.  Let me therefore crave the indulgence of the House a little further by describing my own family’s history which is relevant to our debate today.

I discovered recently, following an unexpected contact from a second cousin in Paris whom I had never met, that our mutual great Grandmother – Raina Sevilla – had been murdered in Birkenau in July 1942.  Born in Bulgaria, married in Istanbul, she was persuaded by her daughter and son-in-law (my grandparents) to move with them from Geneva to their new home in Paris.  That was 1934. Six years later, after Paris fell to the Nazis, Raina was asked to register with the occupying authorities at the Hotel Crillon – Nazi headquarters in France.  Like hundreds of thousands of French Jews, Raina dutifully complied with the new laws and reluctantly wore her yellow star on her coat.  In the summer of 1942, the registered Jews of Paris were systematically arrested and taken to the Vel d’hiv, the Paris velodrome from where they were moved to Drancy, a suburb of Paris near the railhead at Bobigny.  The cattle trucks left daily for the extermination camps and Raina was taken to Auschwitz Birkenau to be exterminated.

I mention Raina Sevilla because like almost every other Jewish family alive in Britain today, I have a direct connection to the Holocaust and through that a direct connection to the nation that was created in 1948, seventy years ago this year, to give safety and security to the Jewish people after the catastrophe of that appalling genocide on such an industrial scale.  But my own roots are even more complex: three of my grandparents were born abroad as was my Father, who couldn’t speak English until he was twelve, although just eight years after arriving in England he started his service in the British Army.

I was brought up in a family that was sceptical about religion, but knew its history and identity.  My sister and I celebrated Seder night with our parents at my grandmother’s home, though we did not have much idea what it all meant. My maternal grandfather was an Orthodox Rabbi who then joined a Reform Synagogue and finally lost his faith altogether. My sister and I are the product of both Ashkenazi and Sephardi traditions, though as a young man I was often mistaken for being Greek, Italian, Iranian or Arabic and sometimes I still am.

Our identity as individuals is defined by our ancestry and our immediate families, as well as our experiences as children and a host of other factors of course, but so much of where we come from is entirely beyond our control, from the colour of our eyes to the tone of our skin or our gender.  What is wholly unacceptable for any civilised society is to use the minute differences in human DNA, or the cultural heritage of individuals to be used as a way of rejecting those people or worse still using them to promote hatred.  I have never been able to understand that kind of hatred which I can only imagine is borne of ignorance and fear, or worse still of evil in the hearts of men – as evidenced by the ideology of the Nazis.

One of the most disturbing aspects of the current wave of anti-semitism – and Islamophobia – is that humanity has clearly not learned from the lessons of history, for if we are ever to create a truly harmonious and peaceful society, we have to stamp out the ignorance and fear that leads to hatred, whether of the Jewish people, or of any other cultural or religious group within society.  And so it is more important than ever before, at this moment in the history of the Labour Party, that we confront the evil of anti-semitism immediately and without prevarication.  Pretending that it doesn’t exist will not deal with the problem, and our Party has to ensure that whatever mistakes it has made up until now are put right, confronted and excised before further damage is done.  We want our Jewish supporters back because in my experience the North Leeds Jewish community, that I have had the privilege of representing now for 21 years, have not only contributed so much to the Labour Party over more than a hundred years, but have a strong social conscience and sense of social justice.  They care deeply not only about their own community but also about the health and welfare of the whole city of Leeds and have made such an enormous contribution to it.  Disillusioned Jewish former members and supporters must feel comfortable once again in the Labour Party.