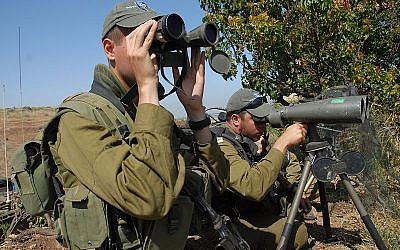 Last month, I returned from a trip to Israel. In a briefing we received from a former intelligence officer on Israel’s northern border, I heard two warnings that Israeli experts have repeated on multiple occasions. First, they talk about the next war not in terms of “if” but “when.” Secondly, they say that the next war won’t only be with Hezbollah in Lebanon, but also with Iranian forces and Shiite militias on the Golan Heights. As Major General Amos Yadlin (ret.) former chief of Israeli military intelligence said, “The next war won’t be the 3rd Lebanon war. It will be the first northern war.”

Now is the time to act to prevent the next war.

Over the past several years, Iran has been working to create a land bridge from Tehran to the Mediterranean. To achieve that goal, Iran seeks to dominate three Arab countries: Iraq, Lebanon and Syria. This strategy explains the massive support that Iran has provided to prop up the regime of Syrian dictator, Bashar al-Assad. The cost: 500,000 dead Syrians and six million refugees.

The motivation of Iranian leaders for this undertaking is twofold: to “export the Islamic revolution” and to pursue their obsession for the destruction of Israel. As Israeli Middle East expert Ehud Yaari recently wrote, “Iran’s Islamic Revolutionary Guards Corps (IRGC) is determined to transform Syria into a platform for a future war against Israel…”

Over the past months, we have seen this dangerous dynamic play out in Syria where Iran has been working to build a vast military infrastructure and Israel has been pushing back through targeted air strikes. Given the fact that Iran has already supplied Hezbollah in Lebanon with more than 120,000 rockets and missiles, we have a powder keg waiting to explode.

Since President Trump announced the withdrawal of the United States from the Iran nuclear deal (JCPOA), his administration has made it clear that the renewal of economic sanctions will target the full scope of Iran’s destructive behavior in the Middle East, including its support for terrorism and the Syrian regime.

Yet the burden of pushing back on Iran’s dangerous ambitions cannot be placed solely on the shoulders of the US government. Investors must know that that their decisions have consequences.

At the recent Munich Security Conference, former US national security advisor, Lt.-General H. R. McMaster warned, “When you invest in Iran, you’re investing in the IRGC. You might as well cut the Islamic Revolutionary Guard Corps a check and say, ‘please use this to commit more murder across the Middle East.”

Sadly, these warnings have fallen on deaf ears. Whereas US companies are largely prohibited from doing business in Iran because it is a State Sponsor of Terror, that is not the case for the rest of the world.

After the Iran nuclear deal was implemented, many European companies rushed to return to Iran. In 2017, European Union (EU) countries exported over $12 billion worth of goods to Iran. In addition, the EU imported $11.8 billion of energy related products from Iran.

There is no doubt that Iranian leaders have interpreted the renewal of business with the EU as a green light to pursue their dangerous ambitions. Therefore, it will be up to us as citizen-activists to send Iran a much different message.

Individual investors who want to avoid investing in companies doing business in Iran can use the Iran Business Registry provided by the non-partisan advocacy group, United Against Nuclear Iran (UANI).

It is also time for courageous leadership from the Jewish diaspora, especially the American-Jewish community.

The leaders of the endowment funds of major Jewish organizations should send a clear message to the international business community: So long as Iranian leaders pursue the destruction of Israel, the hard-earned dollars of our loyal donors will not be invested in foreign companies doing business in Iran.

Two community leaders who spearheaded the effort to adopt the policy are Emilie Socash, currently Executive Director of the Jewish Federation of the Pinellas and Jonathan Ellis, the chair of the JCRC of the Tampa JCCS and Federation.

Emilie Socash wrote, “In 2012, TOP took on the ambitious task to move into an investment practice which is wholeheartedly and honestly anti-terror. Our investment partner—Goldman Sachs—developed a first-of-its-kind preventative screening tool that takes advantage of readily available public data on companies scrutinized by the State of Florida for their activities with Iran and Sudan. Since instituting this unique anti-terror policy, and expanding it in 2016 to include prohibiting investments in companies actively boycotting Israel, our foundation has grown to $50m under management and our primary investment pool has seen net investment results of over 7% annually on average.”

Jonathan Ellis described the motivating factors behind the decision to adopt the anti-terror investment policy.

He wrote, “For the economic sanctions to have the full impact as desired, it is imperative that the organized Jewish community institute the same investment policies that we are seeking our government to institute through sanction and divestment legislation. This includes ensuring that Jewish institutions not only divest directly from those companies subject to the divestment legislation, but also ensure that Jewish institutions do not indirectly invest in the same companies through mutual funds or other indirect investment vehicles. Without such safeguards in place, our community is subject to claims of hypocrisy by seeking one thing from our governments and failing to follow the same policies in our own institutions.”

Iranian leaders must know that there is a severe economic cost for their reckless behavior in the region. By adopting an anti-terror investment policy, Jewish communities can do their part to help prevent “The First Northern War.”