She eyed me up and down and said, “This isn’t your party.” 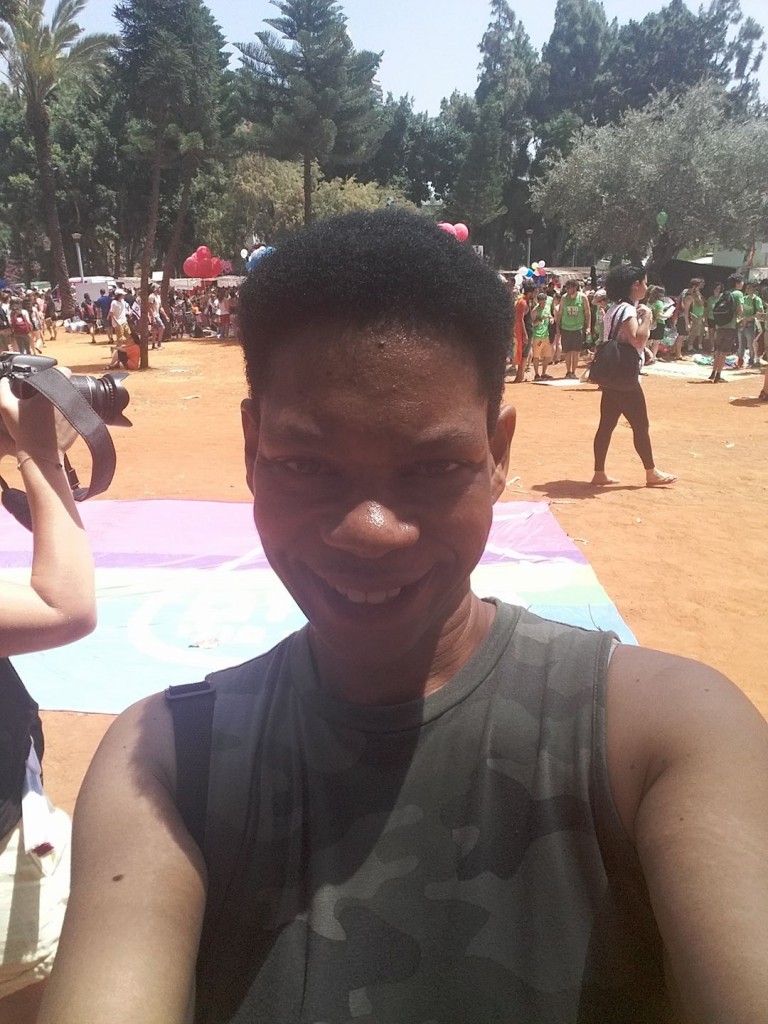 At first I didn’t understand what the woman at the club entrance meant. I had already tried the front entrance, which was the typical Tel Aviv late night drunken grope fest. There, I had explained that I was looking for the Pride party and the security guard had asked me to go around to the back. So, I was fairly sure I was in the right place.

Apparently she read my confusion and clarified, “This is a woman’s party.”

“Yes, I know,” I replied. “That was the reason I bought the tickets online three days ago.”

After the clarification I went downstairs. The party was amazing, and I have a whole new appreciation for Beer Sheva! But it brought home that even after an entire week of Pride events around the theme of “Bisexuality Visibility”, I still might as well be wearing camouflage. Since I am easily identifiable as both Black CIS-gender, this is the one time when I understand the complex balance of being part of a hidden minority, much like Jews of European descent. I present as fairly feminine and date people who generally are identified as men. So, if I choose, I can take advantage of all of the benefits of assumed heterosexuality. But I feel different even if I don’t look it, and when I see other members of the community being abused, I know I have to speak up.

This was the first year that I attended the Pride parade, although I went to several after-parties last year, where once again I had to have women vouch for me that I belonged. The vibe was amazing, with fantastic music and people spraying us with water from the apartments that lined the streets. When you see so many happy people, it’s difficult to understand why anyone would care who bumped genitalia with who. I am fairly sure that there is a lot of diversity going on behind closed doors in the Orthodox community. It’s just that no one feels compelled to ask what you’re doing if they can happily assume that you’re just like them.

The world would be a much better place if everyone worried about their own personal situation versus getting involved in the “vices” of others. And this goes equally for religion. Ironically, one of the reasons that I transitioned (if you’ll pardon the pun) from religious to secular was the hypocrisy of people justifying violence or discrimination against others either in spite of their professed observance, or worse, specifically because of their observance.

Believe me, a rainbow sweatband will not turn your daughter gay. Just like thinking that perhaps Palestinians deserve rights to self-determination, at least in theory, doesn’t mean you hope Israel is bombed out of existence. Not all religious people believe that if you’re gay you’re going to hell. But enough are willing to say it that eventually I realized that being religious isn’t synonymous with being a good person, and being secular doesn’t mean you’re a bad person. TLDR; you do you.

I don’t know what the theme of next year’s Pride parade will be. I am both optimistic that Israel seems to be more accepting with each passing year, and pessimistic that even the LGBT community can be dismissive of bisexuality and trans-sexuality. In all likelihood, when I march in next year’s Pride parade, I’ll still be sporting my camouflage dress as a symbol of being invisible. But no matter how I’m dressed, at least I know it’s my party.