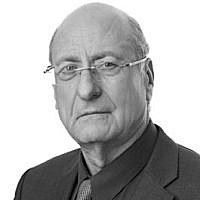 The Blogs
Amnon Reshef
Apply for a Blog
Advertisement
Please note that the posts on The Blogs are contributed by third parties. The opinions, facts and any media content in them are presented solely by the authors, and neither The Times of Israel nor its partners assume any responsibility for them. Please contact us in case of abuse. In case of abuse,
Report this post.

As you prepare to discuss the proposed law on the annexation of Ma’ale Adumim, we, members of Commanders for Israel’s Security, wish to alert you to the risks to Israel’s security posed by the intended reckless abuse of the broad national consensus around Ma’ale Adumim. The proposed legislation would endanger our future sovereignty there and Israel’s future sovereignty over the other settlement blocs, and will undermine other national security interests of the State of Israel.

Commanders for Israel’s Security firmly believes that the Jewish neighborhoods of Jerusalem as well as the large settlement blocs adjacent to the security fence – including Ma’ale Adumim – must become part of the State of Israel in any future agreement.

However, the unilateral annexation of Ma’ale Adumim endangers this vision. It threatens to set in motion local, regional and international developments that could imperil vital Israeli interests including our above-mentioned common aspiration that the settlement blocs become part of Israel in any future agreement.

In light of similar past decisions that were made without a comprehensive assessment of possible consequences, and given your personal responsibility for the outcome of the decision and for the manner in which it is made, we urge you to insist on a full review of the position of the National Security Council, the security establishment, the Ministry of Foreign Affairs and the Government Legal Advisor regarding the risks entailed in the proposed legislation, including:

We caution that going forward with such legislation, without extensive deliberations on the hazards it entails, would be a dangerous gamble that could turn out to be a mistake of historic proportions.

This is not a time for adventurism. What Israel needs now are measured steps to stabilize the situation, like those recommended in the Security First plan we submitted to you and the other government ministers, and which we presented in detail to the Prime Minister and Minister of Defense.

The combination of military, civilian and political steps this initiative entails, steps that do not require a partner for their implementation, would enhance Israel’s security and promote stability in Judea and Samaria; set in motion a process of separation from the Palestinians; and improve our regional and international standing – all without requiring any change in the present deployment of the IDF.

We urgently call upon you to see to it that a legislation with possible damaging consequences for the Zionist vision is not enacted.

We are at your disposal for any clarification or additional information you might require.

About the Author
Gen. Reshef, a former Commander of the IDF Armored Corps, is Founder and Chairman of Commanders for Israel’s Security (CIS).
Related Topics
Related Posts
Comments