That was the new slogan that J Street U representatives, the college and university campus organizing arm of J Street, used at the 2017 J Street Conference in Washington, DC from February 25-28..  It says it all.  There is no contradiction between being pro-Israel and pro-Palestine.  On the contrary, a resolution of the Israeli-Palestinian conflict is the condition for peace, for both peoples.  And being anti-occupation is a key to guaranteeing the future of the State of Israel, As General (Ret.) Amiram Levin says, “the only existential threat to the State of Israel is the continuation of the occupation.”  That’s the opinion of an estimated 90% of the Israeli security establishment.

There were 3,500 delegates to the 2017 convention, including 1,200 students from over 50 universities.  Two of them, Eva Borgwardt, J Street U Co-Chair for the Northwest , a sophomore at Stanford University who gave a rousing speech, and Brooke Davies, the current President of J Street U, a senior a the University of North Carolina, both proudly declared the slogan. 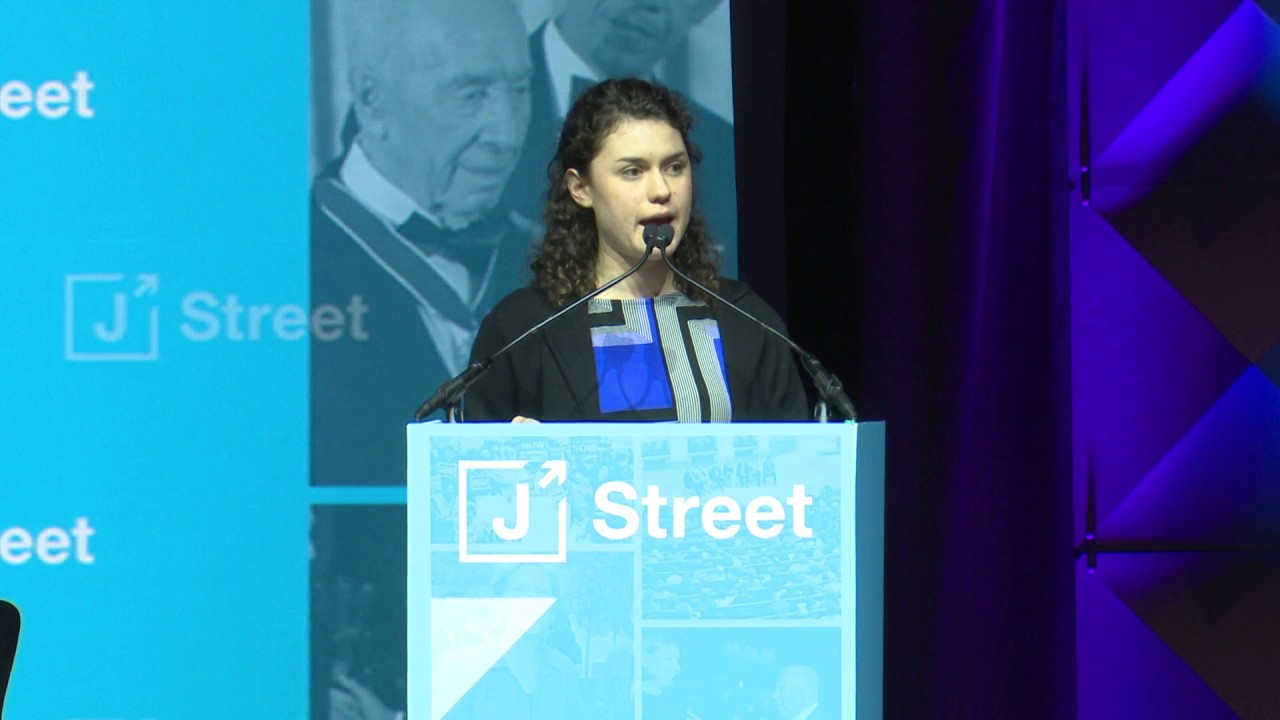 Eva Borgwardt, J Street U Co-Chair for the Northwest, speaking at the conference. (Photo: J Street).

I was one of a few dozen Israelis at the conference, along with a number of Palestinians, including my colleague Palestine-Israel Journal (www.pij.org) Co-Editor Ziad AbuZayyad.  Very impressed by the slogan, which I felt was a development on the traditional J Street definition as a Pro Israel, Pro Peace organization, I complimented indefatigable J Street President Jeremy Ben-Ami on the upgrading of the slogan.  “That’s J Street U.” he said, while J Street continues to use the more general slogan.

An ideal slogan for a nuanced reality

I asked Evan, a graduate with honors from the MA program at the Colin Powell School for Civic and Global Leadership at the City College of New York what he thought of the slogan “Pro Israel, Pro Palestine, Pro Peace, Anti-Occupation”.  He thought it was ideal, since he rejects a total BDS of Israel, but supports the distinction between the occupation and Israel proper. Although by age, a member of the so-called millennial generation, those who came of age after 2000, who he said tend to see things in more simplistic black and white terms, he prefers nuances, which are a more accurate reflection of life.

Unfortunately, the Israeli government doesn’t seem to understand nuances, This week it passed a law which bans entrance to the country to anyone who supports a boycott or Israel or “any area under its control”, meaning the settlements in the occupied territories. The government doesn’t understand that the best way to fight the delegitimization of Israel and total BDS is to defend Israel’s right to exist while criticizing the occupation which deprives the Palestinians of an equal right to self-determination.  The government appears to prefer the support of right-wing Evangelical Christians, who want all Jews to come to Israel and to eventually convert to Christianity in preparation for Jesus’ second coming, to liberal American Zionist Jews who support Israel and believe that the occupation endangers Israel’s future.

It’s okay to Love Israel and Hate the Occupation

In general, the J Street Conference was a coming together of liberal American Jews, who are still in a state of aftershock about the Trump victory, and their allies in Israel, who have been gotten used to living with a right-wing regime for years.  But it was not despair, but a sense of energy and activism which characterized the three days. This spirit was reflected in the title of the conference, “Defending our Values, Fighting for Our Future.”   The general theme was that it is okay to love Israel and to hate the occupation.  As Prof. Bernard Avishai, who divides his time between Israel and the U.S. said, the point is not to support Israel blindly, including some of the Israeli government’s anti-democratic policies, but “to support those Israelis who believe in democracy and human rights,” in the vision of Israel that was shared by the founding fathers and mothers of Israels in the 1948 Declaration of Independence, the values shared by liberal and progressive American Jews, who overwhelming rejected the Trump-Bannon hyper nationalistic-Tea Party-alt-right-white supremacy vision in the recent elections.

Feeling The Bern at J Street

For me, a highlight of the conference was the presentation by Democrat presidential candidate Senator Bernie Sanders, who was greeted with a standing ovation and cries of “We love you Bernie” from J Street youth. He began by condemning the anti-Semitism anti-Muslim and general anti-minority expressions unleashed by Trump’s campaign and victory in the U.S., while criticizing the President for not being speaking out strongly against them.

Bernie Sanders: “The establishment of Israel was an enormous achievement…but there was also a more painful side to the story” (Photo: J Street).

Sanders of course mentioned his personal connection to the State of Israel.” In 1963,” he said, ” I lived on a kibbutz near Haifa (Kibbutz Sha’ar Ha’amakim which he didn’t mention by name). It was there that I saw and experienced for myself many of the progressive values upon which the State of Israel was founded. I think it is very important for everyone, but particularly for progressives, to acknowledge the enormous achievement of establishing a democratic homeland for the Jewish people after centuries of displacement and persecution, and particularly after the horror of the Holocaust.”

However, he added, “But as you all know, there was another side to the story of Israel’s creation, a more painful side. Like our own country, the founding of Israel involved the displacement of hundreds of thousands of people already living there, the Palestinian people. Over 700,000 people were made refugees. To acknowledge this painful historical fact does not “delegitimize” Israel, any more than acknowledging the Trail of Tears delegitimizes the United States of America.”  As Ambassador Martin Indyk said in the closing plenary, “this is the closest any major American political figure has coming to referring to the Palestinian nakba, without using the term itself.”

In closing, Sanders asked: “So what should we as progressives – American progressives, Israeli progressives and progressives globally — demand of our governments…?” He then referred to the values of democracy, equality, pluralism, respect for minority rights and opposition to xenophobia. “These are values that are shared by progressives in this country and across the globe. These values are based upon the very simple notion that we share a common humanity. Whether we are Israelis or Palestinians or Americans, whether we are Jews, Christians, Muslims, or of another religion, we all want our children to grow up healthy, to have a good education, have decent jobs, drink clean water and breathe clean air, and to live in peace.”

“That’s what being human is about. And our job is to do everything that we can to oppose all of the political forces, no matter what side they may be on, who try to tear us apart.”

Sanders said that ” “To oppose the policies of a right-wing government in Israel,does not make one anti-Israel , just as one can oppose Donald Trump’s policies without being anti-American, and just as one can oppose policies of Islamic extremism without being anti-Muslim.” And he said that “we should be clear in our support of a two-state solution, which involves the establishment of a Palestinian state in the territories occupied in 1967, (which) has been bipartisan U.S. policy for many years. It is also supported by an overwhelming international consensus, which was reaffirmed in December by the United Nations Security Council Resolution 2334.”.

The only thing I can say after that is Amen.

After the conference, I went to visit Kramerbooks & Afterwords Cafe and Book Shop at Dupont Circle.  There on the counter were copies of “The Trump Survival Guide: Everything you need to know about living through what you hoped would never happen” by Gene Stone.  At the top of the back cover were the words

That very much summarized the spirit of the J Street Conference.