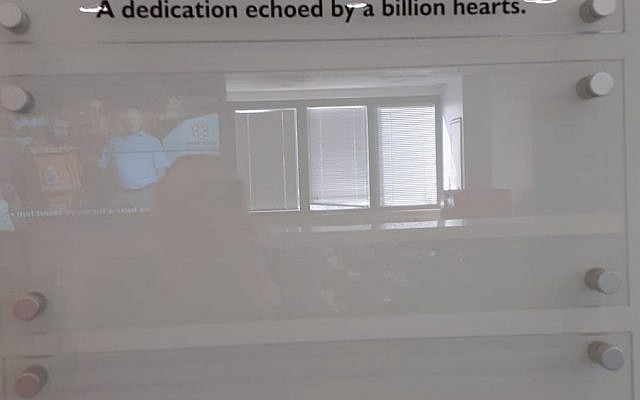 This plaque is located in the main United Hatzalah Building in downtown Jerusalem. Alan Dershowitz is deserving of this recognition.,

The picture that appears on the top of my Blog was taken this past Sunday when my wife and I, her brother Benji and his family, who live in Johannesburg, were invited to a guided tour of their facility which serves as its headquarters.

The tour guide confirmed that it was a new Dedication Wall that will contain the names of donors. When we visited, Alan’s plaque was one of only three on that wall.

Alan Dershowitz sits on United Hatzalah’s International Board of Governors.

I can vouch for this personally as I feinted in Shul while davening Shacharit a few months ago and within seconds Hatzalah volunteers were at my side. Many of them were in the same Shul at the time. My family doctor was davening in another minyan in a different room and suddenly heard the call for Hatzalah, so he rushed over and made sure I was OK.

To know for certain it was just a feinting spell, the paramedics took no chances and I was transported via ambulance to Shaarei Tzedek hospital. It was Rosh Chodesh that Friday morning and I had to remain in the Emergency Room for many hours as they had to take blood tests, wait for results and then take more blood tests a few hours later. Due to the promptness of all Hatzalah volunteers involved, that gave the Emergency Room doctors just enough time to allow me to return home right before Shabbat.

The total cost that I was billed by Hatzalah for all the services rendered to me was a grand total of zero shekels. Hatzalah gets its income from donations. I must admit, I have given Hatzalah donations over the years, but not on a regular basis. So I immediately signed a monthly stop order at my bank to give Hatzalah a regular donation.

In my mind,  it appears accurate to say that Alan Dershowitz is to the legal profession what a Hatzalah volunteer is to the medical profession – always willing to help when he is called upon to do so.

The plaque does a good job of accurately describing the major goals of Alan Dershowitz’s efforts regarding Israel and Human Rights. Dershowitz, a Harvard law professor and author, is a prominent defender of Israel and has consulted with President Trump on his Israel policy. He has also said that many other Presidents and Israeli Prime Ministers have had discussions with him regarding the Jewish State.

Human Rights is also included on that plaque. That is a subject which I hope to discuss in future Blogs.

Alan Dershowitz has now become a key member of President Trump’s defense team regarding the Impeachment charges brought forward to the Senate by House Democrats after a House vote.

Speaking on the Senate Floor a few days ago, Alan Dershowitz said “I am here today because I love my Country and our Constitution. Everyone in this room shares that love.”

He has also said that “He is participating in this impeachment trial to defend the integrity of the Constitution and to prevent the creation of a dangerous constitutional precedent,” he said.

This peace plan which was just revealed takes on a much more pro-Israel stance than UN Resolution 2334. With Dershowitz busy defending President Trump in the Impeachment hearings, it would be useful to refresh your memory regarding U.N. Resolution 2334, and what Alan Dershowitz said at that time.

United Nations Security Council Resolution 2334 was adopted on 23 December 2016. It concerns the Israeli settlements in “Palestinian territories occupied since 1967, including East Jerusalem“. The resolution passed in a 14–0 vote by members of the U.N. Security Council (UNSC). The United States could have used its veto power but chose to abstain.

The resolution states that Israel‘s settlement activity constitutes a “flagrant violation” of international law and has “no legal validity”. It demands that Israel stop such activity and fulfill its obligations as an occupying power under the Fourth Geneva Convention.[2] [3]

The office of the Israeli Prime Minister stated that “the Obama administration not only failed to protect Israel against this gang-up at the UN, it colluded with it behind the scenes”, adding: “Israel looks forward to working with President-elect Trump and with all our friends in Congress, Republicans and Democrats alike, to negate the harmful effects of this absurd resolution.”[34]

The Israeli government also fears that the resolution’s call to distinguish between the territories of Israel and the occupied territories will encourage the Boycott, Divestment and Sanctions movement.[1] Netanyahu said that Israel has to reevaluate its ties with the UN following the adaptation by the Security Council.

Dec 29, 2016 – “Settlements are not the barrier to peace. The issue is will the Palestinians recognize Israel as the State Of The Jewish people and stop incentivizing people to engage in terrorism.”   Alan Dershowitz on Fox News reacting to U.N. Resolution 2334. Dershowitz also added that this resolution “sets back the peace process enormously”.

Dershowitz was upset with the speech that John Kerry made justifying the Resolution on December 28, 2016, because Kerry said “It is not this resolution that is isolating Israel, but the permanent policy of settlement construction that risks making peace possible”. And Kerry adds, virtually every country in the world other than Israel opposes settlements”.

Prime Minister Netanyahu expressed his deep disappointment with Kerry’s speech, by saying that “he spent the majority of his speech blaming Israel for the lack of peace”.  Kerry also “condemned a policy enabling Jews to live in their historic homeland and in their eternal capital Jerusalem”.

On December 29,2016, former Arkansas Governor Mike Huckabee on the Fox Channel The O’Reilly Factor Show – He held up a map of all the Moslem Countries surrounding Israel, and pointed out that the Jewish State has 1/640th of the land mass of those Moslem Countries. He says that John Kerry should consider getting that land from those people who have 640 times the amount of land that Israel has.

Defending President Trump Is In Effect Defending The State Of Israel

It should therefore not surprise anyone that Alan Dershowitz decided to stand behind President Trump and defend him at the Impeachment trial.

And that is despite the fact that Alan admitted voting for Hilary Clinton.

President Trump has shown many times that he is a firm backer of the Jewish State and will most likely continue to be one of its strongest allies for the remainder of his Presidency.

It seems that Alan Dershowitz has made it his goal to do all in his power to throw out these Impeachment charges against President Trump.

With Alan Dershowitz on his side, President Trump should come out victorious.

May G-d give Alan Dershowitz the strength to carry out his mission of defending the State Of Israel, Human Rights and the Jewish people until he is 120 years old.

About the Author
Born and raised in the Minneapolis suburb of St. Louis Park. Married to a South African, we lived in Johannesburg from 1979 to 1996. Made Aliyah with our seven children on Parshat Lech Lecha. BSB Accounting Degree from the University of Minnesota. Investment Portfolio Manager and Analyst. Served in the US Army Reserves Semi Retired spending quality time with my wife, children, grandchildren and attend Kollel while analyzing current events as they relate to Torah and Mitzvahs.
Comments