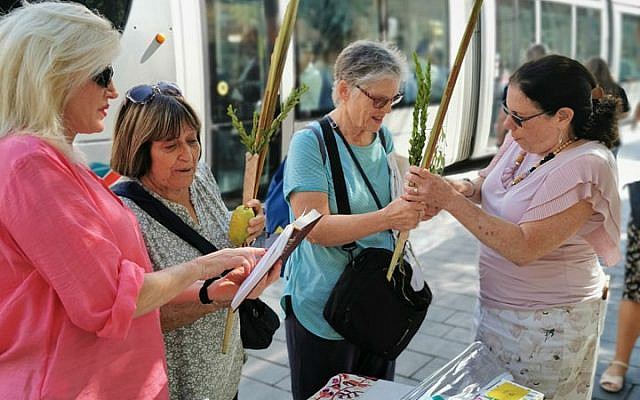 When my colleagues and I ran Women of the Wall’s lulav and etrog stand during Sukkot, we received overwhelming support from passersby – religious and secular, young and old, men and women. Almost no one batted an eye or made a rude comment about women not being obligated to fulfill this commandment. Even those who did not wish to participate due to their own customs expressed their support. No shouts of “How dare you!” or accusations of heresy. No threats of violence.

When we run the same stand throughout the year for women to wrap tefillin, the scene is quite different. While there are some who show their support, even if they do not stop to participate, many of the reactions are quite negative. People shout derogatory remarks at women daring to don a tallit and wrap tefillin. Many are shocked and disgusted by the sight.

Why is the reaction so different when people see women shaking the lulav and etrog, versus wrapping tefillin? The location is the same. The act is more or less the same – women are fulfilling a time-bound mitzvah that is not required of them.

What’s more, many take issue not with the act itself, but that women are performing these commandments in front of others rather than in the privacy of our homes where no one can see us. Some rabbis claim that we are “disrespecting the public.” I, along with the majority of Jews, respectfully disagree. Women are just as much part of the public as men, and the tides are changing in favor of women’s participation.

While the negative reactions to women wrapping tefillin are disheartening, the positive reactions to the lulav and etrog stand undoubtedly signify progress. Twenty years ago, women shaking the lulav and etrog in public during Sukkot may have attracted the same antagonistic attention that we receive when wrapping tefillin. But I’ve seen in my years at Women of the Wall that this is not the case.

Progress takes time, but even small steps should be celebrated. At our lulav and etrog stand, an ultra-Orthodox woman came to take part, but she had never performed this mitzvah in public. She shook the four species quickly, as she was not completely comfortable being seen doing so. The fact that she stopped and took time out of her day to participate with Women of the Wall was truly groundbreaking.

It’s not just Sukkot where women’s public participation has become more normalized. When we gather to read Megillat Esther at the Kotel, many women who may have come to listen to the men’s reading instead end up joining ours. The same happens during our Selichot services. Many Orthodox synagogues here in Jerusalem and around the world now proudly allow women to dance with the Torah on Simchat Torah. This trend can be seen beyond religious life as well, with an increased demand to see women represented in all political parties. In nearly all aspects of Jewish life, women are moving closer to the forefront.

As women become increasingly visible in the public sphere, it is crucial that we continue to fight to ensure that women can participate without vitriol and threats of violence. My hope as Executive Director of Women of the Wall is that one day, hopefully in the not too distant future, people will look at women praying out loud, wrapping tefillin, or reading Torah in public the same way that they see women shaking the lulav and etrog.

About the Author
Yochi Rappeport is the Executive Director of Women of the Wall. She was raised in Tzfat in an Orthodox family and served in the IDF as a commander in the Nativ Military Course - teaching Judaism and Zionism. She now lives in Jerusalem with her husband and two daughters, where they are part of a Modern Orthodox community that values feminism and pluralism.
Related Topics
Related Posts