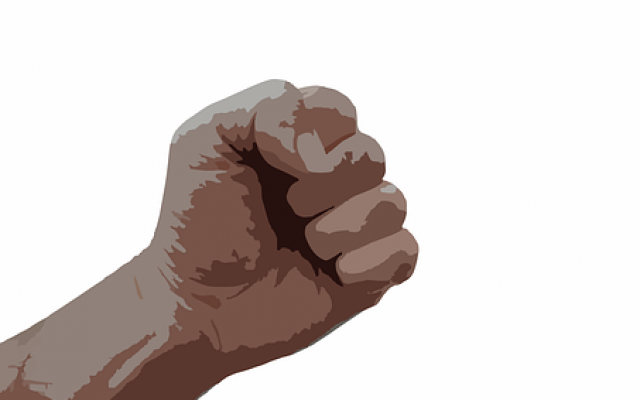 The website of the Revolutionary Communist Party, USA greets you thus: “Welcome to the REVOLUTION.” It also says: “Making revolution against a powerful and vicious enemy –and going on from there to bring into being a whole new world, without exploitation and oppression– is an incredibly challenging and complex process.” It invites you to join the Party with the goal of “emancipating all of humanity through revolution and advancing to a communist world, free of exploitation and oppression.” It offers a Constitution for the New Socialist Republic of America and several books and pamphlets. Communism: The Beginning of a New Stage is available in English, Farsi, Arabic, Turkish, German, Spanish, and Portuguese, and the Party calls for prospective translators to engage in Chinese and Hindi translations. You can also find the autobiography of Bob Avakian, the Armenian-American who has led the Revolutionary Communist Party, USA since 1979, titled From Ike to Mao and Beyond: My Journey from America’s Mainstream to Revolutionary Communist. The “revolutionary pamphlet,” as is defined, titled Revolution and Communism: A Foundation and Strategic Orientation, also written by Avakian, contains a section subtitled “Beyond the narrow horizon of the bourgeois right.” These are the current concerns of the American communists.

The year after its creation (1975), the FBI considered this group “a threat of the first magnitude to the internal security of the United States” as Aaron J. Leonard and Conor A. Gallagher quote in their book Heavy Radicals – The FBI’s Secret War on America’s Maoists: The Revolutionary Union / Revolutionary Communist Party 1968-1980. Currently, its Facebook page has just thirty-six followers. But Avakian remains convinced and calls for “the overthrow of this system, as the fundamental solution to the continuing horrors this system causes for the masses of humanity.” By “this system” he means American capitalism. An exhortation of the RCP USA, dated May 2016 (Barack Obama was ruling then) has as a slogan It is time to organize for a REAL revolution.

Even so, two months ago, the Revolutionary Communist Party, USA declared its public support for the Joe Biden campaign. These post-Maoists regard Biden and the Democratic Party as “representatives and instruments of this exploitative, oppressive, and literally murderous system of capitalism-imperialism.” In their view, “Biden is not ‘better’ than Trump, in any meaningful way –except that he is not Trump and is not part of the move to consolidate and enforce fascist rule, with everything that means.” Consequently, “To approach this election from the standpoint of which candidate is ‘better’ means failing to understand the truly profound stakes and potential consequences of what is involved. The fact is that there can be one –and only one– ‘good’ that can come out of this election: delivering a decisive defeat to Trump and the whole fascist regime.”

Although it might be obvious to anybody alien to communist dialectics that those to the left of the Democratic Party should favor whoever is competing with Donald J. Trump, for militants of American extreme progressivism, that decision is not so simple. Bhaskar Sunkara, author of The Socialist Manifesto and editor of the far-left magazine Jacobin (its print edition has 60,000 subscribers and is lauded by Noam Chomsky), laid out the dilemma in an op-ed published last May in The New York Times. Its first line put it eloquently: “It’s not easy being an American socialist these days.”

Sunkara explains that American socialists, like progressives in general, want to defeat “right-wing populism,” but unlike them, they refuse to do so “on the centrist terms that we believe helped create it in the first place.” He accepts the point that “A socialist left cannot isolate itself from a broader progressive movement,” acknowledges that “Donald Trump is a fundamental threat to the United States,” and that it would be reasonable to accept the results of the Democratic primaries, “much as Mr. Sanders has.” He recalls that 88% of Bernie Sanders supporters in 2016 ended up voting for Hillary Clinton in the general election, but he posits that local socialists now face a much more complex dilemma. “They are not merely figuring out how to vote as individuals –they are weighing how to use finite institutional resources to build the political alternatives of the future.” And while the Democratic candidate is undoubtedly the “lesser evil” between the two contenders, “that doesn’t mean socialists must fall in line behind Mr. Biden” or have to resign themselves to choosing “between two parties captured by the corporate elite.” Whereupon, as the column title announces, “You’ve Probably Heard Socialists Won’t Vote for Biden.”

Principled socialists like Bhaskar Sunkara and his 60,000 readers may subtract Joe Biden votes, while pragmatic communists like Bob Avakian and his 36 Facebook followers may add votes for him. Whether this Lilliputian embrace of the Democratic Gulliver will somehow tip the electoral balance on November 3 is impossible to predict. Even as the Democratic candidate leads the Republican in the polls, in an election every vote counts. Comrade Joe shouldn’t look down on these newfound radical, tiny allies.

About the Author
Julian Schvindlerman is an Argentine writer and journalist specializing in Middle East affairs. He lectures on World Politics at the University of Palermo (in Buenos Aires) and is a regular contributor to Infobae and Perfil. He is the author of Escape to Utopia: Mao's Red Book and Gaddafi's Green Book; The Hidden Letter: A History of an Arab-Jewish Family; Triangle of Infamy: Richard Wagner, the Nazis and Israel; Rome and Jerusalem: Vatican policy toward the Jewish state; and Land for Peace, Land for War.
Comments