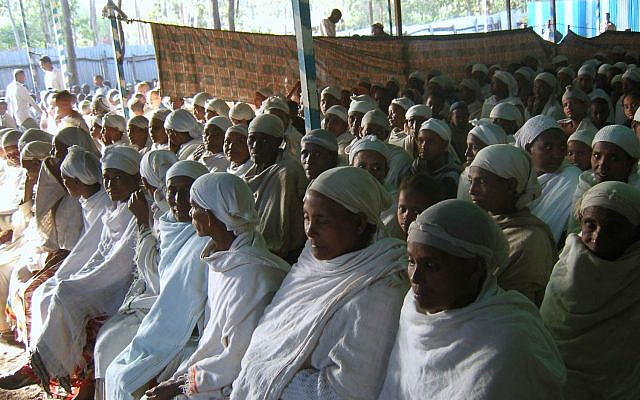 Last month’s announcement by the Israeli government that it will grant aliyah to another 3,000 Ethiopian olim wasn’t entirely unexpected. However tenuous some would like to portray the link between the Jewish homeland and Africa’s remote Jewish communities, Israeli leaders know they they can’t afford to turn their back on those in Ethiopia. Israel’s reputation as both the Jewish homeland and a guardian of human rights depends on completing its promise of rescue that it made almost a half-century ago.

At the present time, there are still thousands waiting to be reunited with their family members in Israel. Many have been waiting decades – often lifetimes – for a chance to reunite with their parents, children, siblings or grandparents. This year, though, their aliyah has a particular urgency to it.

While the western world speculates over whether the latest vaccines and boosters will keep us safe from the newest COVID mutation, the majority of Jewish descendants in Ethiopia have faced the past two years without any vaccine protection at all (only 1.3 percent of the entire country is fully vaccinated). While Jews in North America and Israel worry about keeping the Jewish state safe from aggressors, residents in Ethiopian Jewish communities face a looming civil war that has already seen troops and militia marching through their region and forced conscription of Jewish residents. And while the global Jewish community worries about the growing strength of antisemites on campuses and outside our synagogues, Gondar and Addis Ababa communities have faced discrimination for centuries, forcing many of its members to convert to Christianity just to survive.

So while it’s great to hear that the Israeli government has settled on a plan to reunite 3,000 direct descendants with their families in Israel, I, like many, worry that it won’t be enough to halt a humanitarian crisis.

The current immigration plan attempts define who, of the some 14,000 residents in the Jewish communities of Addis Ababa and Gondar, are really Jews and deserving of repatriation with Israeli family members. According to the latest negotiations between the Ministry of Immigration and Absorption and the Ministry of Interior, those 3,000 olim must all be first-degree descendants of Israeli citizens. In other words, they must be parents, children or siblings of Israeli citizens. First-degree doesn’t include aunts, uncles, grandparents or cousins. It also doesn’t take into consideration that like everywhere in this world, the nuclear family has been dramatically transformed by COVID, civil war and poverty.

Will the teenager who is an orphan and was raised by her grandmother in Ethiopia be able to join that limited airlift? When her grandmother was offered aliyah, she naturally assumed her granddaughter, who she faithfully raised as a Jew, would follow in the next airlift, even though she isn’t a first-degree relative.

And what about the parents who died in Israel waiting for their son to be reunited with them on the “next” flight. Does the son, who is now grown (and married) still have seats on the plane?

Or the little boy who never stops talking about the “Jewish homeland” he discovered when he was rushed to hospital in Israel, and those nice doctors operated on him in an emergency bid to save his life. His world has been transformed – but not his lineage: he is much too young to have first-degree relatives in Israel.

As Minister of Interior Pnina Tamano-Shata has demonstrated time and time again recently, saving lives isn’t for the faint of heart. It requires excruciatingly hard questions, but it also takes an appreciation for compassion and for history that halacha and laws often can’t control.

That’s not to say that Israel hasn’t allowed compassion to rule its decisions in the past. It’s accepted immigrants from Spain, where generations of “hidden” communities have maintained their Jewish lineage by openly practicing as Christians. It’s opened its doors to applicants from northern India numerous times, where many had adopted Christian traditions, only to later return to their faith. During the 1980s, it embraced thousands of Soviet Jews whose generations abandoned religious observance in an effort to survive an oppressive communist regime. And ever since its founding, Israel has recognized, and continues to accept, North American Jews who were born of mixed heritage and allowed them to declare aliyah as returning, practicing Jews.

As Jews, we know how to be sympathetic. We also know how to to stand up for those whose lives are at stake. As Israel has demonstrated throughout its short and intense history, at-risk Jewish communities shouldn’t be condemned to live in endemic poverty and be persecuted for their heritage because their parents or they themselves had to make excruciating decisions for survival.

The 2015 decision granted aliyah to 9,000 Ethiopian Jews, 4,000 of whom now reside in Israel. But it also acknowledged Israel’s original 1980s commitment to repatriate the current descendants of Ethiopia’s Jewish community to the Jewish homeland, just as it has done for endangered Sephardim and Ashkenazim from other regions of the world. Deciding who deserves to be saved and who doesn’t based on whether they are first-degree relatives means once again, leaving behind those who might otherwise have qualified had it not been for the tragedies of war, COVID and circumstance. Israel’s job as a protector of Jewish life won’t be complete until it brings home the remaining generations that continue to keep Ethiopia’s ner tamid alive.