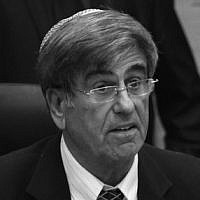 The Blogs
Shimon Ohayon
Apply for a Blog
Advertisement
Please note that the posts on The Blogs are contributed by third parties. The opinions, facts and any media content in them are presented solely by the authors, and neither The Times of Israel nor its partners assume any responsibility for them. Please contact us in case of abuse. In case of abuse,
Report this post.

According to Jewish tradition, Hebrew was the original language of humanity and the tongue used by the Creator to form physical existence. It is also the only language in the world that was kept in exile for two millennia, only to be reconstituted as a national language in its ancient homeland.

Hebrew has a special resolve and unique history, which has played a not insignificant role in our national reconstitution.

As such, one of my first acts upon being elected to the Knesset was to form a caucus for the promotion of the Hebrew language, a venture joined enthusiastically by many other Members of Knesset, writers, artists, poets, broadcasters, educators, teachers of Hebrew, lecturers and researchers in higher education institutions, including the President of the Academy of the Hebrew Language and the heads of the global center for promoting the Hebrew language.

Jorge Luis Borges, poet and key figure in Spanish literature, once said: “In general, every country has the language it deserves.”

Hebrew, the tongue we daily expressed our yearning for a return to our homeland, is the language which bound our nation in exile.

The reestablishment of our sovereignty in this land has meant that our people returned from the four corners of the earth speaking well over a hundred different languages. The necessity of national social uniformation has meant that Hebrew must not only be promoted as the official language, its usage must supersede that of other languages.

According to statistics, there are only 15 nations in the world which do not have an official national language.

The main basis for the belief that Israel has multiple of official languages, each with equal legal weight and status is the main law governing language policy issued in 1922, for the British Mandate of Palestine, which stated that all official notices and forms should be published in English, Arabic and Hebrew. This ruling was adopted, like many other Mandatory laws, into the State of Israel, although an amendment, made days after the Declaration of Independence in 1948, was added abolishing the English as a requirement.

Thus, while Arabic was and remains a necessity on official notices and forms, it has never been formally given the official status of a national language.

It is on the basis of this misnomer that significant controversy arose over my recent law that would provide Hebrew with a special status in law. It is not to delegitimize other languages, prevent other languages being used on official documents or signs or prevent other languages from being spoken, as some have claimed. It is simply to put in law what has been the de facto situation since the founding of the State of Israel.

There have been numerous laws stating the supremacy of Hebrew, passed and supported by all governments, both Left and Right. However, it is clear that the status of Hebrew, like other national institutions, such as the flag, state symbols and national anthem, have to be provided with an official status.

This law will also have a practical effect, which will mandate the study of Hebrew in many institutions where it is not currently obligatory. It is nonsensical, both from a practical as well as from uniformatory reasons, to allow large communities in Israel from mastering the language of the land.

The current status means that it could prove very difficult for those who do not have sufficient Hebrew, like some in the Arab or ultra-Orthodox Jewish populations, from achieving equality because societal advancement which may rest on professional and social opportunities, which would be more challenging without sufficient knowledge of Hebrew.

It is vital to note that the means of expression of a people cannot be changed by any law, and we should be proud of the fact that people speak so many languages and it is what makes Israel a cosmopolitan and global country.

However, like the majority of other nations on earth, Israel needs an official language bound in law. Those that continue to fight against this law or belittle the effort are usually the very same who fight against Israel as the national homeland of the Jewish People, seek to change or replace HaTikva as our national anthem and are embarrassed by any and all symbols of Jewish nationalism in our state.

Just as our culture and tradition kept us through the long night of exile, now it is our turn to preserve what has bound us as a people for millennia. The Hebrew language is at the apex of our ancient culture and tradition, which affords it not just a special and unique status, but also a formative one.

How can we afford it any less in our reconstituted homeland?

About the Author
Shimon Ohayon is a Member of Knesset for Yisrael Beytenu and Chairman of the Knesset Caucuses for the Struggle Against Antisemitism and the Rights of Jewish Refugees from Arab Countries.
Comments