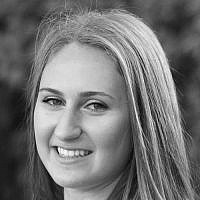 The Blogs
Yael Pasumansky
CAMERA Writing Fellow
Apply for a Blog
Advertisement
Please note that the posts on The Blogs are contributed by third parties. The opinions, facts and any media content in them are presented solely by the authors, and neither The Times of Israel nor its partners assume any responsibility for them. Please contact us in case of abuse. In case of abuse,
Report this post.

University students often fall victim to antisemitic and anti-Zionist discrimination on campus, yet most students don’t realize that they have legal rights to combat this behavior. Many universities consider Zionism as a solely political movement and fail to recognize that anti-Zionist rhetoric creates and often reinforces antisemitism on campus. Students should seek to fight for their civil rights and to explain the connection between antisemitism and anti-Zionism on campuses. In a webinar co-hosted by myself, Tulane University for Israel, CAMERA on Campus, and others, Benjamin Ryberg of the Lawfare Project spoke about different cases the organization has handled involving discrimination against Israelis, Zionists, and Jewish students. Benjamin empowered university students to take a stance against antisemitic/ani-Zionist behavior on campus, and he explained the civil rights that protect Jewish and Pro-Israel voices.

Benjamin Ryberg is the Chief Operating Officer & Director of Research for The Lawfare Project. The non-profit provides pro-bono legal services to Jewish and Pro-Israel communities to defend their civil and human rights, through strategic litigation: lawsuits aimed at creating social change, thus affecting communities at large. The work of the Lawfare Project shows that it is not only wrong, but it is illegal to discriminate against a student based on their beliefs and religion.

Many campuses share a common misconception that Zionism is a purely political position including my campus, Tulane University. When I heard that an article titled “Zionism is an attack on Judaism,” was to be published in our school newspaper, I was immediately alarmed. I scheduled a meeting with the newspaper staff, explaining that Zionism is a part of and indistinguishable from my Judaism. The Jewish people had been yearning for Zion for thousands of years. Just like it would be antisemitic to prevent someone to express their Judaism by wearing a Kippah, it would be antisemitic to prevent me from acting as a Zionist. Zionism is a part of my Jewish expression, and this title was incredibly offensive to myself and my peers. Though the newspaper editors listened to my perspective, the article was still published in the paper. I later responded with my own perspective. Events similar to this drove me to host an event featuring the Lawfare Project. Anti-Zionism is prevalent on campuses across the world, and the Lawfare Project has taken the initiative to help various students who experience discrimination.

At San Francisco State University, for example, the Hillel group hosted an event with the highlighted speaker, Nir Barkat, the mayor of Jerusalem. Protestors invaded this event, screaming genocidal anti-Israel sentiments. The screaming and bullhorns got so disruptive that the event could not go on. Rather than stopping the protesters, the campus police were approached by university administrators and advised to allow the protesting to go on. The Lawfare Project later found more instances of discriminatory measures against Jewish students at San Francisco State University, such as excluding a Jewish student group from a “Know Your Rights” fair which was meant to provide information and resources to marginalized communities. The Jewish students were told that their group was solely a political organization and therefore could not participate. The Lawfare Project proceeded to file a suit.

The entire California State system decided to settle this case the night before it was due to go to court. This settlement included acknowledging Zionism as a core component of  Jewish identity, meaning that anti-zionism is not merely a political stance. To me, this was the most powerful case presented by Ryberg. Though it is incredible that the California State Universities have recognized Zionism as an integral part of Jewish identity, this idea should be spread throughout all academic institutions. This concept, that Zionism is merely a political stance, has normalized anti-Zionist activities on college campuses, giving students and faculty free license to discriminate against Zionist students. Thus, the work of the Lawfare Project is essential in fighting discrimination and upholding respect in academic institutions. All universities should recognize and vindicate the fact that anti-Zionism is a form of antisemitism.

Ryberg concluded his lecture by explaining some of the important rights students on campus should be aware of: the First Amendment and the Title Six Civil Rights Act. The Title Six Civil Rights Act prohibits discrimination by any institution that receives governmental funding; this includes almost all public and private universities in the United States. Ryberg emphasized that the Lawfare Projects seeks to protect Jewish and pro-Israel students both on and off-campus. In one scenario, the Lawfare Project was council to Israeli student, Lihi Aharon, who was the target of a hate crime in New York. Many outwardly Jewish students experience discrimination both on their campuses and in public. Ryberg urged students to try to record these types of situations and to contact legal aid soon after their occurrence. He explained that when students wait too long to bring forth these cases, it can become impossible to make legal rulings on a student’s behalf. Ryberg encouraged students to reach out to the Lawfare Project if they feel as though they have been discriminated against for being Jewish or Pro-Israel.

The work of the Lawfare Project is crucial in fighting the violation of civil rights and global antisemitism. Ryberg’s speech showed students that they have legal rights and protections as pro-Israel activists on campus and in the world. University students are future global leaders, and the fight against antisemitic discrimination begins on campus. Students must stand up for their legal rights to foster a future of tolerance and acceptance, not only on campuses but in the world.

About the Author
Yael is from Seattle, WA, and is currently an undergraduate at Tulane University in New Orleans, LA. She is pursuing a double major in Political Science and Philosophy. Yael is a CAMERA Writing Fellow (2019-2020). She is particularly interested in Middle Eastern studies and immigration politics. Yael spent last summer living in Givatiym, Israel, and interning for the corporate law firm, Steinmetz, Haring, Gurman, and Co.
Related Topics
Related Posts
Comments