The Blogs
Shlomo Alegra
Apply for a Blog
Advertisement
Please note that the posts on The Blogs are contributed by third parties. The opinions, facts and any media content in them are presented solely by the authors, and neither The Times of Israel nor its partners assume any responsibility for them. Please contact us in case of abuse. In case of abuse,
Report this post. 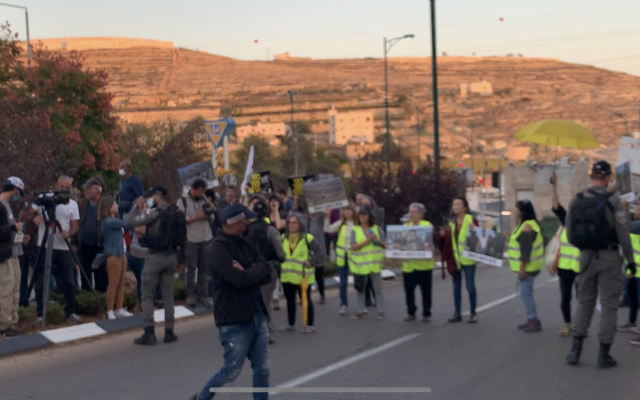 Today as President Issaac Herzog was coming to light the first candle of Hanukkah in the Cave of the Patriarchs, many left-wing activists ascended to Kiryat Arba to protest.

At first it is quite odd to think of Isaac Herzog coming to light a candle for the holiday in a city one would think he opposes a Jewish presence.

Herzog having been a leader of the Labor Party from 2013 until the Zionist Union party .

Both parties have advocated strongly against Jewish settlements beyond the green line, while pursuing peace agreements with the Palestinians.

From 2018 he stepped down from partisan politics and became the head of the Jewish Agency helping Jews from abroad immigrate to Israel.

In early 2021 Herzog was up as a presidential candidate against Miriam Peretz (mother of two soldiers killed in combat), strangely enough Herzog was elected in an overwhelmingly right wing parliament in a landslide victory.

The Labor Party which Herzog was a member supports a two state solution with a demilitarized Palestinian State.

The Labor Party in the early ’90s under Prime Minister Yitzchak Rabin signed the Oslo Accords with Yasser Arafat to begin the establishment of a Palestinian state with division of land and a Provisional Palestinian Government.

For years Labor has seen the Oslo Accords as a tool to end the the Palestinian-Israeli conflict.

Labor’s opponents saw Oslo as responsible for an increase in suicide bombings in the early nineties to the early 2000s.

Increasing Palestinian terror attacks forced many Israelis to evaluate their position on the peace process and saw a steady increase for support of right wing parties.

Joining the Zionist Union whose main objective concerning Palestinian-Israeli Peace Process was to restart negotiations with the Palestinians, while stopping settlement expansion.

All of these issues are what Herzog represented when he was in these parties and has not shown any change in his own political views.

The President of Israel has no real political power and is only the ceremonial head of the country similar to the Queen of England.

Perhaps Isaac Herzog’s visit to Hebron to light a candle was a non-political one.

If Herzog still holds his left-wing ideologies concerning the conflict, he can not ignore how Hebron has almost 4,000 years of Jewish history.

Perhaps Herzog after years in power realizes that Jews living in Hebron and throughout the West Bank provide Israel with security.

Jews living in Judea and Samaria bring in the police and military to deal with possible terrorists before they commit an act of terror.

Withdrawing from the entirety of Judea and Samaria could lead to Hamas or Islamic Jihad overthrowing the current Palestinian authority.

Such a new terror entity could create an existential threat to Israel.

Herzog’s rationale for lighting the first candle of Hanukkah in Hebron may stem more from his Jewish education than his own political beliefs.

Due to Herzog’s presence in the candle lighting ceremony, many left-wing activists arrived this afternoon about three hours before sunset.

Many of the activists came in two white buses shouting “Free Palestine” and “Stop the Occupation.”

They blocked the main entrance as police tried to prevent them from reaching inside Kiryat Arba.

The police did not allow them to enter by bus so they tried to enter on foot, at this point the police had to call the border patrol and army for backup to prevent them from reaching further inside.

If the protestors would have reached the first neighborhood of Kiryat Arba they would have ignited greater conflict with the residents resulting in violence and arrests.

A small group of residents mostly younger children showed up to counter protest.

After an unsuccessful attempt to get inside Kiryat Arba, the protestors got up and left at sunset.

A few years ago Labor activists came to Gush Etzion and were offering Israeli flags to local residents saying to them how brave we are.

I would venture to say there is a rift perhaps among the Labor Party which might side more with Yair Lapid’s party where there would be an exchange of land between Palestine and Israel in a final peace deal. 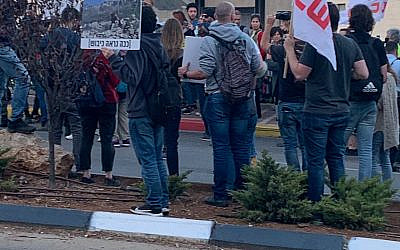 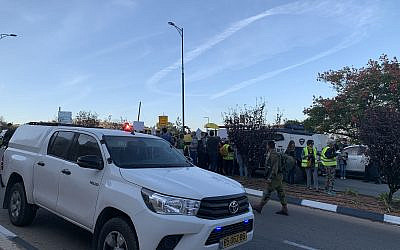 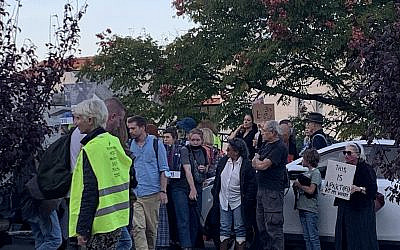 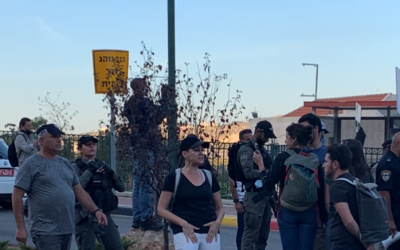 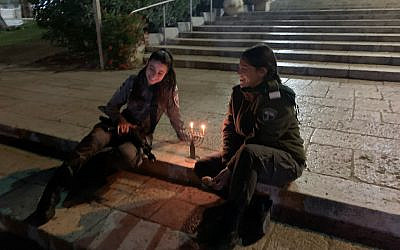 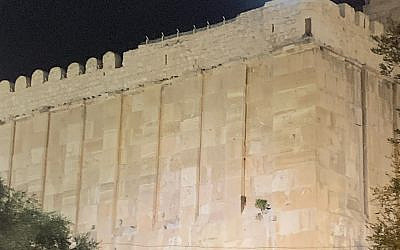 Cave of the Patriarchs Menorah light for first night of Hanukkah.
(Photo taken by Author of Blog 11/28/2021)
About the Author
Shlomo was born in Miami, Florida in 1989 and moved to Israel in 2012. He holds a degree from Florida Atlantic University in Political Science and served in the IDF as a combat soldier in the Netzach Yehuda Battalion. After serving in the military Shlomo studied in Yeshivat Shavie Hevron where he lived in Hebron. He now lives in Kiryat Arba, is a proud reservist in the Golani Brigade, and is a blogger for the Times of Israel.
Related Topics
Related Posts
Comments