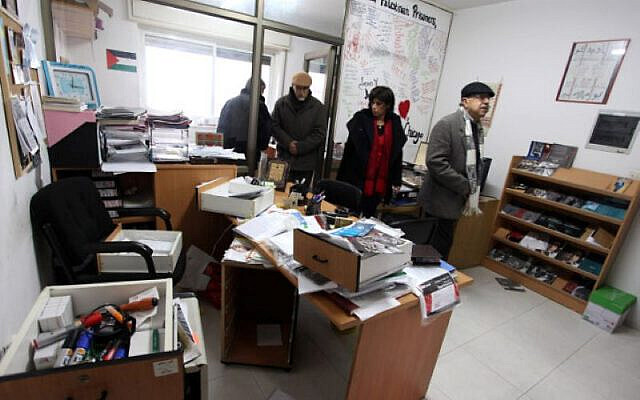 Employees at the offices of Addameer in Ramallah after an IDF raid on Palestinian NGOs in December 2012. (Issam Rimawi/FLASH90)

The Hebrew expression “prove that you don’t have a sister” is commonly used to describe situations where an allegation is made without any evidence, and it becomes incumbent upon the subject of the allegation to prove that it’s false.  It is basically the opposite of “innocent until proven guilty.” This reflects the situation of the six Palestinian NGOs designated by the Israeli Defense Ministry as terrorist organizations, supposedly because of ties to the PFLP.  No substantiated proof of the charges has been offered, and US and European officials have commented that they have yet to see evidence that would support Israel’s claim.

Israel has told the concerned Americans and Europeans that it has the proof but has yet to show it. Meanwhile, the accusation itself has already produced the chilling effect that was  one of the government’s objectives in making it – hesitancy on the part of the Europeans to continue transferring funds to the organizations in question.

The NGOs, of course, have the option of putting their case before the Israeli Supreme Court, but aside from reluctance to work within the system that is owned and operated by the occupation forces, they are well aware of the court’s record when it comes to rulings in cases that supposedly involve the holy grail of Israeli security. Security interests, of course, would also mean not making public the evidence that proves the charges, claiming that it is classified and leaving the plaintiffs flailing against the wind.

Aside from the injustice of such a system, there are other concerns about the Israeli government’s actions. By outlawing the Palestinian NGOs, it has laid the ground for moving against the Israeli human rights organizations that expose Israel’s violations of international law in the occupied territories and which have declared that they will continue to support and cooperate with their Palestinian counterparts. But perhaps more importantly, the move does not serve Israel’s security interests.

Little by little, step by step, Israel has been shrinking the space available to the Palestinians for nonviolent resistance to the occupation. Casting the BDS movement as antisemitic and conducting a worldwide campaign to get it banned in Europe and the United States is but one example. This latest, sweeping move against these respected and influential Palestinian NGOs fighting for the rights of their people, however, is unprecedented in its scope and daring. Should the Palestinian human rights defenders find themselves silenced and the public left with no legitimate outlet to fight the occupation, their recourse to violence would come as no surprise.

After Defense Minister Gantz’s announcement, a State Department spokesman said that the United States would “be engaging our Israeli partners for more information regarding the basis for these designations.” Later, following a visit to Israel and the West Bank, US Ambassador to the United Nations Linda Thomas-Greenfield appeared to be sending a message to Israel when she tweeted that she was “inspired by the work” of civil society leaders with whom she met in Ramallah, adding that the United States supports Palestinian NGOs in their monitoring of human rights abuses “wherever they occur.”  Meanwhile, reacting to the Israeli move, the EU spokesperson noted that past Israeli allegations of the misuse of EU funds had not substantiated and said that the EU requires substantiated evidence in order to take action. According to the Times of Israel, EU High Representative Josep Borrell told a closed meeting of international donors in Oslo earlier this month: “We are asking for answers from the Israeli government, and we have not yet received convincing answers.”

The question is: How long will the international community wait to see the evidence?  After all, it’s in the government’s interest to drag its feet interminably, allowing the charges themselves to do their damage without having to prove them. But the donors must not license Israel to hold them hostage in this manner.  Instead of “asking” for answers, they must demand that Israel present its evidence and set a deadline that will put an end to the limbo into which the Palestinian NGOs have been cast.