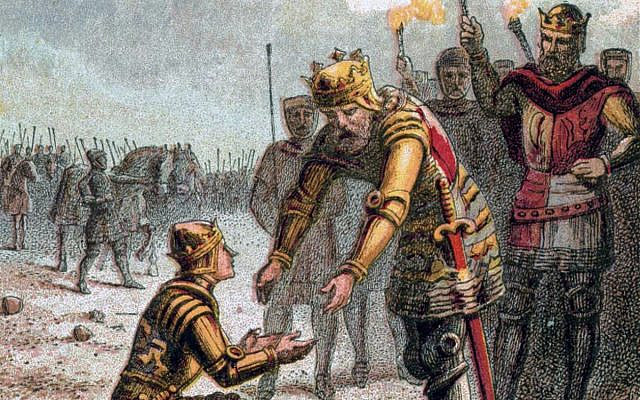 This week I went to see the incomparable Nick Cave and the Bad Seeds, live, in Rishon Lezion. It was a truly fantastic show which gave me an entirely new perspective on the brilliance of Nick’s melancholy, polyrhythmic, ostinato-based music.

Seated by the piano, alone on stage, he performed “Into My Arms” as the first song of his encore. The opening lines of the song are:

I don’t believe in an interventionist God
But I know, darling, that you do
But if I did, I would kneel down and ask Him
Not to intervene when it came to you

Cave does not believe in a God who directly interferes in the world. But if you read his “Red Hand Files,” you will find that he believes in God and he prays regularly. He writes:

God is love, which is why I have difficulty relating to the atheist position… Each day I pray into the silence. I pray to all of them. All of them who are not here. Into this emptiness, I pour all my desire and want and need, and in time this absence becomes potent and alive and activated with a promise.

In 1360, it was belief in an interventionist God that brought the first phase of the Hundred Years’ War to an end.

The Hundred Years’ War was one of the most significant wars in the Middle Ages, as two kingdoms fought over five generations for the French throne. It began with the death of Charles IV of France in 1328. Charles had no sons and no brothers. However, he had a sister – Isabella, who was the wife of Edward II of England. 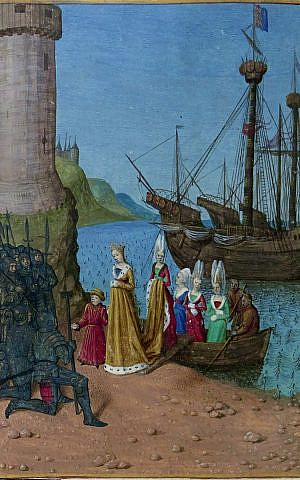 Isabella deserves an entire blog of her own, but in 1326, she and her close friend Roger Mortimer led an invasion of England, deposed her husband, and were possibly involved in plotting her husband’s assassination in November 1327. She ruled as regent on behalf of her son, alongside Mortimer until 1330, when Edward III turned 18 and took the crown from his mother.

When her brother died, Isabella claimed the French throne for her son. However, French law did not allow women to rule the country, and the nobility decided that Isabella could not transmit a right she did not have to her son. Instead, her cousin, Philip IV (known as Philip the Fortunate) inherited the crown.

For the previous few centuries, England had held land in France (due to the fact that William the Conqueror was French). By 1327, only part of Aquitaine – corresponding to modern Gascony – remained the property of the English crown. Yet, this meant that by French law, Edward III was a vassal of Philip and owed him homage and allegiance. Eventually, Edward conceded his claim to the crown and paid homage to Philip.

However, a decade later, Philip decided to take Gascony back from English ownership. In protest, Edward renewed his claim to the French throne and led an invasion force to the north of France. This led to years of bloody conflict interrupted by several treaties and bouts of Black Death.

In 1350, Philip died, and was replaced as king by his son John the Good. In 1356, Edward’s son, also named Edward but known as the Black Prince, led an army to France. At the Battle of Poitiers, the English captured John and took him back to England as a hostage.

One of the soldiers was Geoffrey Chaucer, who had been taken captive in the Reims campaign earlier in the year and ransomed by Edward for £16.

Encamped outside Paris, the king tried to entice the French Dauphin, Charles, into open battle outside the city, but he refused, holing himself and his men up inside the impregnable walls of the city.

After a week, having given up on taking Paris, Edward led his men to the cathedral city of Chartres. As they marched, they laid waste to the countryside, looting as they went, even though it was the holy week of Lent. 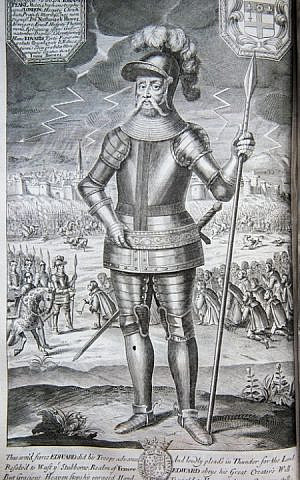 The English army reached the gates of Chartres on April 13, which was Easter Monday. Although the city was well fortified, it had few men to defend it. Edward prepared for a short siege, setting up his camp in an open field just outside the city.

Suddenly, in the dark of night, a storm came out of nowhere. Lightning struck and killed several soldiers. As the temperature plummeted, huge hailstones and freezing rain fell on the camp, killing officers and soldiers alike.

Tents were torn apart. Baggage was scattered. There was nowhere to shelter from the storm. Nearly 1,000 men were killed and as many as 6,000 horses. Sir Guy de Beauchamp II, eldest son of the Earl of Warwick, was seriously injured and eventually died two weeks later. A contemporary chronicler described it as:

A foul day, full of myst and hayle, so that men dyed on horseback.

I am skeptical of the fact that a tenth of the men were killed in a single storm, and perhaps the details have been embellished. But the French Chronicle of Jean Froissart, written just a few years after the battle (sometime between 1369 and 1400) describes it in this way:

There happened such a storm and violent tempest of thunder and hail, which fell on the English army, that it seemed as if the world was come to an end. The hailstones were so large as to kill men and beasts, and the boldest were frightened.

The king turned himself towards the church of Our Lady at Chartres, and religiously vowed to the Virgin, as he has since confessed, that he would accept of terms of peace.

In just a few minutes, the storm had transformed a destructive fighting force on the verge of taking the French crown into a huddled group of scattered, injured men. Edward saw this as a clear sign of divine displeasure. He, and all those with him, saw the hand of an interventionist God intent on stopping them.

The next morning, the Abbot of Cluny, Androuin de La Roche, came out to the camp to negotiate a peace treaty. The same day the English withdrew from the siege, and three weeks later, on May 8, 1360, the Treaty of Brétigny was signed, effectively ending that stage of the Hundred Years’ War.

By the terms of the treaty, Edward was given large parts of French territory — Guyenne and Gascony, Poitou, Saintonge and Aunis, Agenais, Périgord, Limousin, Quercy, Bigorre, the countship of Gauré, Angoumois, Rouergue, Montreuil-sur-Mer, Ponthieu, Calais, Sangatte, Ham and the countship of Guînes – for which he would not have to pay homage to the French king. In exchange, Edward renounced his claim to the French throne.

John was released from the Tower of London, but only after paying a ransom of 3 million écus, which led to the first minting of the franc.

The treaty did not end the war but did lead to nine years respite from the battles.

Black Monday, as the events of the storm outside Chartres came to be known, remained a euphemism for divine displeasure and God’s intervention.

Over 200 years later, in Merchant of Venice, Shakespeare wrote:

It was not for nothing that my nose fell a-bleeding on
Black-Monday last at six o’clock i’ the morning,

His audience would have understood exactly what Launcelot was saying to Shylock. The clear message was that God was not happy with what the Jewish money-lender planned to do.

This week’s Torah reading, Re’eh, begins with Moses exhorting the Israelites to obey God and keep His mitzvot (Deuteronomy 11:26-28).

The specific wording of the blessings and curses is given later, in Parshat Ki Tavo (Deuteronomy 27). However, it is clear that Moses is describing an interventionist God Who will reward or punish according to the actions of the nation.

There are many Jewish views regarding Divine Providence. To what extent does God intervene in the world to reward those who follow His laws or to punish those who reject His commandments? Does He also intervene to ensure every blade of grass grows, as the Midrash (Bereishit Rabbah 10:6) says:

Rabbi Simon says: There is not a single blade of grass that does not have a mazal in heaven that hits it and says to it, ‘Grow.’

Maimonides, in Guide for the Perplexed (Book 3: Chapter 17) lists five theories of providence, including “Our theory, that of the Torah.” He then rejects them all in favor of his own opinion, which is that providence is (according to the Friedlander translation):

Related and closely connected with the intellect because providence can only proceed from an intelligent being… Those creatures, therefore, which receive part of that intellectual influence. will become subject to the action of providence in the same proportion as they are acted upon by the Intellect.

In the following chapter, he clarifies that:

The relation of Divine Providence is therefore not the same to all men; the greater the human perfection a person has attained, the greater the benefit he derives from Divine Providence. This benefit is very great in the case of prophets and varies according to the degree of their prophetic faculty: as it varies in the case of pious and good men according to their piety and uprightness.

So, according to Maimonides, an average person will have virtually no Divine Providence. It is unsurprising that many people do not believe in an interventionist God. The failing is not with God, in Maimonides’ opinion, but with their individual level of perfection.

However, elsewhere (for example, Hilchot Teshuva 6:11-12) Maimonides speaks of collective providence. He writes that God decreed that the Egyptians would enslave the Israelites (Genesis 15:13) and that the Israelites would worship idols (Deuteronomy 31:16). According to Maimonides, there is a divine plan which directs the rise and fall of nations from the beginning of history to the messianic era (see also Hilchot Melachim 11:11).

Maimonides writes that even though there is providence on a nation, every individual is free to choose their own actions. No single Egyptian was divinely forced to enslave the Israelites, and no individual Jew was coerced by God to worship idols.

The Talmud then asks if Rabbi Meir and Rabbi Yehuda say judgment is only once a year, what is the point in praying at any other time of year.

Even if we have not reached the level of individual providence that allows the Divine Intellect to answer our prayers, we should still pray.

As Nick Cave would say, even if we do not merit to perceive an interventionist God, we should still bow our heads and pray.

My next series on WebYeshiva begins on August 30th. It is entitled “The 6 Historical Events of Rosh Hashanah” and will be live over four Tuesdays. You can listen to the live or recorded Torah classes on WebYeshiva. I’ve also started sharing more of my Torah thoughts on Facebook. Follow my page, Rabbi Sedley.