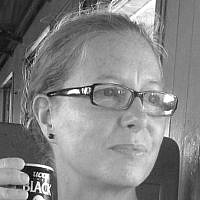 The Blogs
Britta R. Kollberg
Apply for a Blog
Advertisement
Please note that the posts on The Blogs are contributed by third parties. The opinions, facts and any media content in them are presented solely by the authors, and neither The Times of Israel nor its partners assume any responsibility for them. Please contact us in case of abuse. In case of abuse,
Report this post.

This time of the year, when it gets dark early in the afternoon in Berlin, I start my day with cottage cheese and finish it with a sweet milky dessert. The cottage cheese is less creamy here than in Israel, more like cheese; and the pudding—as everyone knows now—is really cheap. In fact, the cheese costs only half as much too: less fat, less money one could say.
Low-fat or low-cost, dairy is a great thing to start the day, or a blog post, or a public debate.

In Germany, we discern staples and luxury goods, differing basically in their price. Following this logic, communication seems to be a luxury here while it is a staple in Israel. Phone costs in Germany are not just high, they are excessive. From Israel, I can call my mother who lives near Berlin and talk with her for an hour before I’d even have to start thinking about money (my Israeli plan doesn’t include unlimited calls abroad). In Germany, however, a one minute call from Berlin to the suburb where she lives, costs me more than the chocolate pudding that made Israeli headlines after a Twitter note some time ago.
Now, I may have a particularly good plan in Israel and a rather bad one here, but the facts remain the same: If I can’t see someone in person in Germany, I would rather call them later from Israel instead of making a German domestic call, since from Tel Aviv, I can chat with them without watching the time.

So, the living costs are strikingly different indeed, regarding food and other things equally important. But it goes both ways. And the differences have a meaning beyond their financial value. Right now, I am sitting in my perfect, newly renovated two-room apartment downtown Berlin for which I pay exactly the same rent as for my simple room in a shared ground-floor apartment in Tel Aviv—including bills. (I sublet either one while I’m gone.) But while that room on King George is an open door to a sunny city that cares more about being a meeting point than about being clean, an open door to spontaneous street parties, political debates in leisurely cafés, and silent scenes like my neighbor discreetly handing the homeless woman on Dizengoff Street a huge sandwich every night—while that room is a door to the sea that you can hear and smell all the way up to Ramat Gan, my apartment in Berlin is a refuge. A shelter to rest from the daily news about racist “incidents” being officially registered as non-political violence, the news about street wars between German Neo-Nazis and German Salafists, news about how to protect this country and Europe from refugees drowning in the Mediterranean sea. The same sea I love to swim in, despite the medusas that inevitably find me throughout the year and the heaps of garbage on the Tel Aviv beaches.

It may be true that I just understand much better what’s going on here as it happens in my mother tongue; and I know of course that there is racism and a huge refugee problem in Israel too. But the public demonstrations on German streets these days don’t deal with staples or luxury goods, with the ridiculous prices for telecommunication or the bizarre public transport costs that are beyond any comparison to Israeli ones and rise every single year (while Israeli postage prices have dropped twice in the last two years, something you’d never see happen in Germany). No, these demonstrations are sated-stomach protests, directed not towards issues, but against people, people called “Islamists” whether they are Christians, Yazidis, or ordinary Muslims fleeing religious persecution by the IS themselves—refugees treated as scapegoats and made responsible for an indefinite fear of the future.
Watching this news, I can eat five chocolate puddings in a row until I throw up from both.

Fortunately, this is not the end of it and there is hope that I don’t have to become a diabetic. This very season is about light in the dark, about restoring the desecrated. Recently, there have been counter-demonstrations, thousands of Germans taking to the streets to show their solidarity, their will to welcome people and to talk about things as they are. Because the fear of the future is real; the gap between the rich and the poor is growing with nauseating speed. But it is a gap we can only close together or all of us will have to pay a high price, wherever in this global world we are.

I should probably close here with a soft twist, a sweet bite bringing to mind this also magical time. But I’d rather go for some latkes with sour cream now and—sorry to my vegetarian friends—for a juicy turkey at my mom’s in about a week.

About the Author
Britta R. Kollberg is a poet as well as a graduate mathematician from Berlin, (East) Germany. After the fall of the Berlin wall, she has worked as an education and social services manager for more than twenty years. She writes from Tel Aviv.
Related Topics
Related Posts
Comments