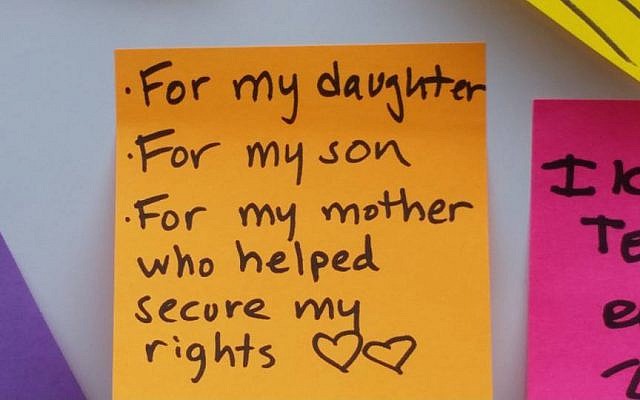 A message from the "Words Matter" board at the Dallas Women's March in 2017. (Taken by the author.)

How is it possible that we are still fighting racism, sexism, and antisemitism in this country? We thought we were the most forward-looking country in the world, a light unto the nations. We thought we had evolved beyond such destructive tribalism. We thought we could see the arc of the moral universe bending toward justice before our eyes.[1] We just had to sit back and let it happen.

That was our mistake. Bending toward justice does not happen when we sit back and watch. Even treading water requires effort and vigilance.

No room for nostalgia

I have trouble finding such a time. The 1950s, the era of signs proclaiming “No Jews, no dogs, no niggers”? The 1970s, when my pregnant mother had the audacity to think her Harvard PhD qualified her for a university professorship? “Go home, little girl,” she was literally told.

How about the 1990s? The 1990s was an era of progressive prosperity. It was also the era when Selma Hayek’s brilliant acting and directing career was destroyed because she refused to sleep with her producer. The era when “I was the best man at a lesbian wedding” was a joke.[2]

We are evolving beyond all of that. These things are no longer acceptable. The arc of the moral universe has indeed bent toward justice, speedily and in our time. I can see it in my mother’s lifetime, in mine, even in my daughter’s. There is no other time in history in which I would rather be living.

Noise in the system

OK, maybe 2015. Obama was president, and Martin Luther King’s dream was on its way to becoming a reality. Gay marriage was legalized, and it seemed like every other discriminatory practice was just a domino waiting to fall. Hope was high, and life was exciting.

Four years later, it can feel as if we’ve taken a huge step backwards. Hate crimes are up year after year, especially against Jews. The voices of intolerance seem louder and louder. We can’t believe we’re still protesting this stuff.

There is noise in the evolution of a moral society, and we should have been prepared for it. The arc of the moral universe may appear to smoothly bend towards justice, but that line is only smooth from a distance, in hindsight. The day-to-day reality is messier, with big steps forward and equally big steps backward, over and over.

Let’s not be fooled by the noise. The voices of intolerance may seem loud right now, but the voices are tolerance are holding their own. When a teacher in Virginia refused to call a transgender student by his preferred pronouns, the teacher lost his job. The Kentucky county clerk who refused to sign marriage licenses of gay couples lost her bid for reelection.

In the early weeks of 2019, the Tarrant County (Fort Worth) Republican party held a vote on whether they should remove their vice chairman because he is Muslim. Not only did the committee vote unanimously not to, but every high-level Republican in the state of Texas renounced the very idea. “The Party of Lincoln should welcome everybody,” Senator Ted Cruz tweeted.[3]

We have seen in the last few years that when we sit back and think that we have evolved past such destructive tribalism, we find ourselves slipping backwards. It is time to heed the warning of Lewis Carroll’s Red Queen: “It takes all the running you can do, to keep in the same place. If you want to get somewhere else, you must run at least twice as fast as that!”[4]

“People like to say, ‘Well, you know, change is happening, things are improving. If you look back a few decades, things have got much better.’ And their implication, often, is ‘leave it alone, things are getting better. If we just wait patiently, it will sort itself out.’ What that fails to take into account is that things have got better but only because of legions of activists, who have fought tooth and nail for those changes to happen, every step of the way. We can’t stop fighting now.”[5]

We must always be louder, more forceful in our belief in equality and justice than those pulling toward tribalism and injustice. The arc of the moral universe does indeed bends toward justice, but only when we hang onto it with everything we have and pull it with all our might.

[1] The full quote from Martin Luther King is “The arc of the moral universe is long, but it bends toward justice.” This metaphor was originally devised by Theodore Parker, a Unitarian Minister, in an 1853 collection of sermons.

[4] Carroll, Lewis, 1871, Through the Looking Glass and What Alice Found There, chapter 2. This analogy is often used to describe the evolution of organisms and is apt for the evolution of societies as well.