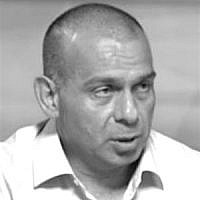 The Blogs
Potkin Azarmehr
Apply for a Blog
Please note that the posts on The Blogs are contributed by third parties. The opinions, facts and any media content in them are presented solely by the authors, and neither The Times of Israel nor its partners assume any responsibility for them. Please contact us in case of abuse. In case of abuse,
Report this post.

I never thought that one day I would applaud for Vladmir Putin, but I did last Thursday! The reason for my first time applause for Putin was his reported response to the Israeli prime minister, Benjamin Netanyahu, to stop living in the past and talk about the world we live in today.

Netanyahu was trying to leverage the upcoming Jewish holiday of Purim to highlight the threat against the existence of the State of Israel by the Islamic Republic of Iran. He referred to today’s ruling regime in Iran as “the rightful heir to the ancient Persia which attempted to wipe out the Jews”!

The mind boggles as to how misinformed the prime minister of Israel, who regards himself as the guardian of his nation, can be.

Shortly after the Islamic revolution in 1979 that overthrew the shah, a regional ally of Israel and the West, the victorious mullahs attempted to destroy Persepolis, the ancient ceremonial capital of the Achaemenid Persia. The national catastrophe that would have been the prototype template for the destruction of ancient sites and artefacts by ISIS and the Taliban was thwarted only by patriotic Iranians, who stood in front of the bulldozers that had been sent by the notorious hanging judge, Ayatollah Khalkhali, to save their pre-Islamic heritage.

The founder of the Islamic Republic, Ayatollah Khomeini, also regarded the pre-Islamic Nowruz, the Iranian New Year celebrations for the start of the spring and the rejuvenation of nature, as a pagan festivity, and tried to ban it shortly after the victory of the Islamic revolution. Other senior leaders of the revolution, like Ayatollah Motahari, also regarded the popular pre-Islamic Iranian fire festival as a leftover from the heathen Zoroastrian fire-worshippers and, to this date, the rulers of the Islamic Republic cannot hide their aversion for the founder of ancient Persia, Cyrus the Great, who freed the Jews from Babylonian slavery. Some have even gone as far as denying there ever was a King Cyrus.

To call the present regime in Iran the “heirs of the ancient Persia” is simply ignorance on steroids, but if that were not bad enough, Netanyahu could not have used a more inappropriate example as Purim.

The biblical story of Esther as the Jewish queen of the Persian King Xerexes, is actually a collection of Assyrian and Babylonian stories with no historical evidence, but apart from that, it seems Netanyahu has not even studied the biblical story properly and is unaware of its details.

According to the biblical story of Esther, the viceroy of King Xerexes, Haman the Agagite, who plans to kill the Jews, is not Persian but an Amalekite, people who lived in the Negev desert and were annihilated, men, women and children by the Israelites. The Jews are actually saved by the Persian king, who allows them to impale Haman and his 10 sons and murder 75,000 of their enemies throughout the kingdom.

The king’s edict granted the Jews in every city the right to assemble and protect themselves; to destroy, kill and annihilate the armed men of any nationality or province who might attack them and their women and children, and to plunder the property of their enemies” — Esther 8:11

Netanyahu’s attempt to leverage Purim against the Islamic Republic is not only sheer philistinism, but it’s also a textbook lesson in how to alienate your friends and potential allies. It’s also an unexpected contrast to his Nowruz message last year, which was warmly received by many Iranians, who regard Israel not as an enemy, but as their natural ally in the region.

Rarely have I seen a leader of a country go so much out of his way to make his enemies look good and make his friends disenchanted.

The only spark of hope in all this is that Israel is a pluralistic state and there are many Jews and Israelis who are just as puzzled and outraged by Netanyahu’s imbecility, especially Iranian Jews whom I have always regarded as some of the most patriotic Iranians, proud of both their Iranian and Jewish heritage.

About the Author
Potkin Azarmehr left Iran after the so-called “Cultural Revolution” shortly after the Islamists took over. In 2005, unhappy about the unrealistic Western media reports on Iran, he started his own blog in English to cover the Iranian news which doesn't make it to the Western mass media. In February 2009, he won the "International Council for Press and Broadcasting Media Award" in the 'Cutting Edge New Media category.' Over the years, his blog became very influential and a reference source on the pro-democracy secular struggle in Iran. In 2010, during the peak of the post-election protests in Iran, the number of unique visitors accessing his blog went past 90,000 a year. He is currently a contributor to several newspapers and Television stations on Iran related news and also writes and produces a number of TV programs.
Related Topics
Related Posts
Comments