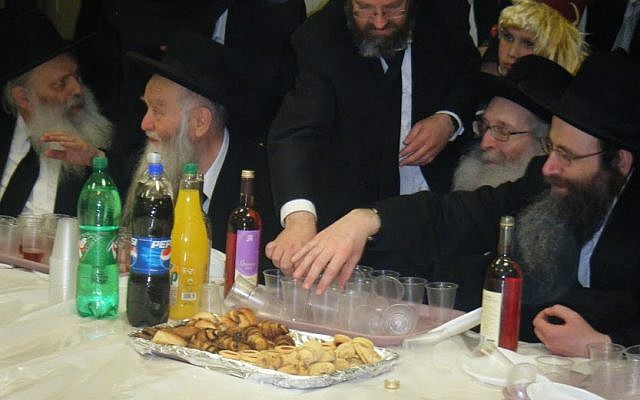 Each of the three meals that we eat on Shabbat (Tractate Shabbat 117b) is called a seudah. On Purim we also have a festive meal, but that meal is called a mishteh. What is the difference between the word seudah and the word mishteh if both mean “meal”? Moreover, there is a third word which also means “meal” — mesibah. In what way does the word mesibah differ from the other two words? In order to illustrate the differences between these three words and their connotations we will focus on the lexical roots of each word and draw from them deeper insights into their meanings.

What is the root of the word seudah? The truth is that the word seudah never appears in the Bible, but Radak in Sefer HaShorashim explains the etymology of seudah by noting that the Rabbis modified the Biblical word saad to become seudah. What does saad mean? The word saad means “support” or “sustenance”, both in a rhetorical way (proof that supports an argument) and in a physical way (food that sustains a person’s body). In a handful of places the Bible uses the verb saad in conjunction with bread (see Psalms 104:15, Judges 19:5, and Genesis 18:5). The name Saadia, most famously borne by Rabbeinu Saadia Gaon (882-942), means “support (from) G-d”. Thus, the word seudah refers to the benefits of a festive feast for sustaining one’s physical body.

The word mishteh or derivatives thereof appear close to fifty times in the entire Bible. Its root is the verb shoteh, “drink”. The type of meal, or party, denoted by the word mishteh, focuses on drinking. In differentiating between the words seudah and mishteh, Rabbi Tzaddok HaKohen of Lublin (1823-1900) writes that while they both refer to festive meals, the former focusing on eating and the latter focusing on drinking. Thus, seudah is generally associated with bread — the focus of the Shabbat meal — because one eats bread (which fills one’s stomach and physically supports him). On the other hand, the word mishteh denotes a meal whose focus is on wine — like the festive Purim meal which commemorates/mimics the banquets of wine in the Book of Esther — because one drinks wine. (See, however, Rashi to Song of Songs 1:2, to Ecclesiastes 2:3, and to Esther 5:4, who writes that the defining element of an enjoyable, joyous meal (seudah) is the wine.)

The word mesibah arguably appears once in the Bible (see Rashbam to Song of Songs 1:12). Rashi (to Amos 2:8) writes that the word mesibah refers to the fact that the participants in the meal would customarily recline (a practice known as haseibah). Case in point: At the Passover Seder we customarily ask four questions about why “this” night is different from all other nights. The last of those questions asks why “all other nights we eat either sitting or reclining (mesubin), but tonight we eat only while reclining”. Thus, the root of the word mesibah is related to the Hebrew word for reclining, and refers to the type of meal where people would sit slouched about, as opposed to sitting erect. It has since been borrowed to refer in general to any type of “party”.

One contemporary linguist argues that the word mesibah is related to the word sovev/sevivah (“around”), and refers to the fact that everyone “gathers around” for a party. However, this claim remains unsubstantiated.

In short, seudah, mishteh, and mesibah are all words for “meal”, but are not quite synonymous. Seudah focuses on the bread eaten at the meal, while mishteh refers to a meal which focuses on drinking wine. The word mesibah focuses neither on the food nor the drink, but on the posture of the participants, because mesibah refers to a meal or party in which the party-goers are seated in couches or lazy-chairs, allowing them to lounge about.

Rabbi Levi Yitzchok of Berditchiv (1740-1810) in Kedushat Levi (Parshat Vayera) writes that the word mishteh denotes a “happy meal”. Based on that he explains that the party to which Esther invited Haman and Achashverosh is called a mishteh in the Bible because that party brought happiness to the Jews. Through that party Esther persuaded Achashverosh to execute Haman and rescind the horrible decree looming over the Jews. The resulting victory for the Jewish People brought happiness for generations to come and is celebrated yearly on Purim.