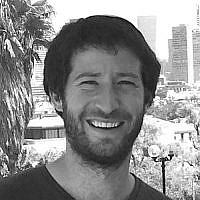 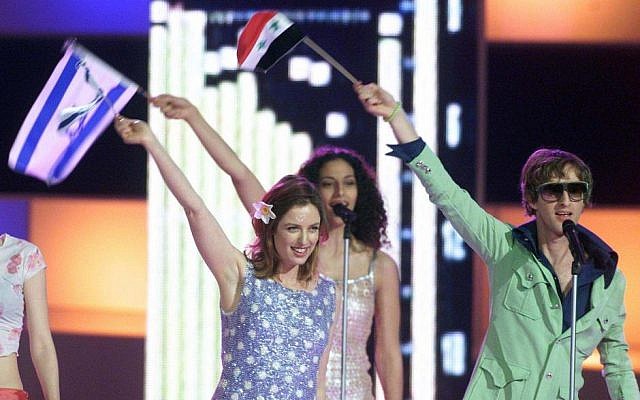 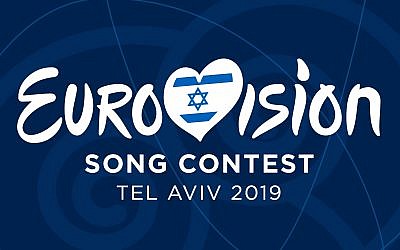 The perfect theme for Purim parties this year has to be Eurovision 2019! Eurovision, the biggest pop-music festival in the world, is just under two months away and will be hosted in Tel Aviv! Purim is already the perfect holiday match for Eurovision, filled with costumes, singing, dancing, drinking, and all sorts of festivities. But on top of all of that, each chapter of the gripping drama of the book of Esther can be matched perfectly with Israel’s past entries. Enjoy this flashback to some of Israel’s most memorable Eurovision performances, now in the context of Purim!

Esther 1:11-12 “Bring Queen Vashti before the king wearing a royal diadem, to display her beauty to the peoples and the officials; for she was a beautiful woman. But Queen Vashti refused to come at the king’s command conveyed by the eunuchs….”

Vashti’s refusal to appear in front of King Achashverosh and his drunken friends has become a feminist symbol in contemporary Jewish thought. You can imagine Queen Vashti singing Netta’s #MeToo anthem right in their faces as she rejects their calls to objectify her.

Esther 2:15 “When the turn came for Esther… to go to the king, she did not ask for anything… yet Esther won the admiration of all who saw her.”

Diva: “She’s all you’ll ever dream to find. On her stage she sings her story. Pain and hurt will steal her heart tonight, like a queen in all her glory.”

Esther being (possibly unwillingly) brought to the harem as a young woman must have been a difficult time for her emotionally. She notably does not even say a word as her life is changed forever by the people around her as she rises to become Queen of Persia. Dana International, originally Yaron Cohen later changing her name to Sharon Cohen, had already come out as a woman by the age of 13 in 1982. At 18, she began performing as a drag queen in Tel Aviv and had sex reassignment surgery in London at 24 years old in 1993. Despite facing all the difficulties and discrimination in her life, being a transexual long before it was even remotely acceptable in society, Dana was crowned Queen of Eurovision. Like Esther, Dana made the most of her traumatic life experiences in order to make a difference in the world.

Advertisement
Esther 3:13 “Accordingly, written instructions were dispatched by couriers to all the king’s provinces to destroy, massacre, and exterminate all the Jews, young and old, children and women, on a single day….“

Light a Candle: (Translated from original Hebrew) “Sometimes it seems there is no hope and all looks so dark and unknown.”

It is a dark time for the Jews of Shushan and all of Persia as Haman’s edict of eliminating all of the Jews becomes law. Sarit Hadad’s performance came at the peak of the violent and deadly years of the Second Intifada. Candles which can both symbolize mourning and remembrance as well as a hope for a better future provide the perfect metaphor for both times.

Esther 4:14 “…and who knows, perhaps you have attained to royal position for just such a crisis.”

Natati Lah Hayai (I gave her my life): (Translated from original Hebrew) “One thing we knew for sure, and they determined this immediately, if she refused – there is no hope. This is what happened.”

As the threat of Haman’s destruction of the Jews becomes more real, Mordechai leaves the fate of the Jews of Persia in the hands of Esther. Kaveret’s song seems like a love song where the man puts himself in the hands of his lover. But the subtext, as later explained by band leader and songwriter Danny Sanderson, was a veiled protest against then Prime Minister Golda Meir that she should reach out to make peace. Mordechai’s petition to Esther is less subtle than Sanderson’s, but they both equally are desperate to find a seemingly impossible solution to make peace possible.

Esther employs her sensuality, and remaining cool under immense pressure, she executes phase one of her plan by having Haman and King Achashverosh attend her banquets. In the video linked above, the British broadcaster is comically mesmerized by the beauty and talent of Chocolate, Menta, Mastik and completely misses the real message of the song. It is not the surface level love song by three 25-year-old women who have been missing their love for “almost 30 years”. Instead, it is more accurately interpreted as a metaphor about the State of Israel’s need and desire for peace ever since its founding in 1948. If only this song was as successful as Esther’s banquets!

Esther 6:8-9 “Let royal garb which the king has worn be brought, and a horse on which the king has ridden and on whose head a royal diadem has been set… and let the man whom the king desires to honour be attired and paraded on the horse through the city square…”
Golden Boy: “I’m a golden boy, come here to enjoy, I’m the king of fun, Let me show you how we do it!“

In a funny twist, Mordechai is paraded with all the bells and whistles of royaly by Haman through the streets of Shushan as a ‘golden boy’ where Haman proclaims: “This is what is done for the man whom the king desires to honour” (5:11). Nadav Guedj sings about parading and partying though through Tel Aviv and wore his flamboyant golden shoes for an exclamation point.

Esther 7:6 “‘The adversary and enemy’ replied Esther ‘is this evil Haman!’ And Haman cringed in terror before the king and the queen.”

Halayla (Tonight): (Translated from original Hebrew) “Before we part, as the daylight goes down, many things will be said between us, a thousand words, a thousand sounds, until the night.”

Esther lays the trap for Haman and he is caught, tried, convicted, executed on the spot by King Achashverosh. The song “Halayla” describes in vague details about a night filled with intense action. But it is the band’s name that perfectly describes Haman’s fateful night “Hakol Over Habibi” – roughly translated to mean ‘everything will pass my friend’ – can also be interpreted as a condescending insult to Haman: ‘you’re finished, my friend!’

Esther 8:15-16 – “…And the city of Shushan rang with joyous cries, the Jews enjoyed light and gladness, happiness, and honour.” 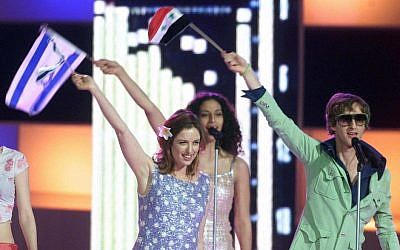 Ping Pong’s 2000 hipster performance where they waved Syrian and Israeli flags to promote the peace talks between the two countries.

The Jews of Persia are celebrating the new decree that they can defend themselves against Haman’s followers and see imminent victory. It is important to note that Haman’s decree was not lifted, nor were the Jews offering peace to their enemies. They were rejoicing at the opportunity to kill their enemies. “Be Happy” is a particularly sarcastic song performed in light of the failing peace negotiations with Syria. They fooled the Israel broadcast authority first by singing the chorus in English instead of Hebrew and then blatantly disobeyed them by taking out Syrian flags at the end of the song. Despite the song’s pretty terrible music, “dancing”, and overall performance, it managed to still beat out two other entries that year! And there is even a documentary about Ping Pong’s rise to fame, entry to the contest as a joke, their epic performance, and the aftermath: “The Loser Takes it All – Eurovision 2000“

Esther 9:28 – “Consequently, these days are recalled and observed in every generation: by every family, every province, and every city. And these days of Purim shall never cease among the Jews, and the memory of them shall never perish among their descendants.”

Hai (Alive): (Translated from original Hebrew) “Listen, my brothers, I’m still alive, And my two eyes are still raised to the light. Many are my thorns, but also my flowers. And ahead of me are years too numerous to count. I ask and I pray, it’s good that hope was not yet lost.”

The Jews are victorious, escaping their fate of extermination. The Eurovision of 1983 took place in Munich, West Germany where just 11 years earlier the Munich Olympics massacre took place. But Ofra Haza wasn’t just singing her proud Zionist and Jewish anthem in their memories. This was the Israeli Eurovision performance in Germany. Haza, a singer of Yemeni descent, took it upon herself to sing in the memory of the 6 million mostly European Jews who perished in the Holocaust. With all of this in mind, “Hai”‘s losing to Luxembourg’s entry will forever be a mystery to me.

Esther 10:1 “King Achashverosh imposed tribute on the mainland and the islands“

Ole Ole (Go Up and Up): (Translated from original Hebrew) “Go up and up, sing together, big and small.”

Taxes are raised, and only Yizhar Cohen’s amazing performance can lift up all of our spirits!

Josh Hartuv is a licensed tour guide in Israel. To learn more or to book a tour, visit www.hartuvtours.com or on facebook @hartuvtours.