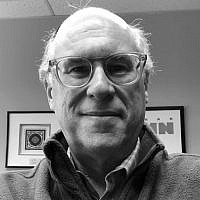 The Blogs
Robert Lichtman
Apply for a Blog
Advertisement
Please note that the posts on The Blogs are contributed by third parties. The opinions, facts and any media content in them are presented solely by the authors, and neither The Times of Israel nor its partners assume any responsibility for them. Please contact us in case of abuse. In case of abuse,
Report this post.

Many of us are familiar with the joyful idea that as soon as we finish reading the Torah, we start all over again. And while this is celebrated as a way in which we demonstrate our love of Torah and the continuity of Torah learning, I’d like to share an idea about how the end of the Torah is the natural lead-in to beginning again, why it’s not only a symbolically beautiful idea to start again, but also a deeply held Jewish imperative. And we cannot begin again until we understand where we ended.

Let’s start somewhere in the middle, a scene that we can readily re-play in our imagination. Moses is at the summit of Mount Sinai having received the 10 Commandments etched by God’s finger into two sensational tablets of sparkling sapphire. Hearing the tumult of Jewish spiritual rebellion taking place far beneath his feet as the Jews are worshiping a golden calf, Moses takes these tablets crafted completely and solely by God and he smashes them to smithereens.

Now let’s scroll to the very end of the Torah that we are going to read soon. The climax of the Five Books of Moses describes the death of Moses, our teacher. I want to take you beneath the text here as Rashi, the most well-known, widely read and prolific of Biblical and Talmudic commentators of 900 years ago, writes his final comment on the final verse of the final book of the Torah. That verse refers to the glorious acts performed by Moses, and Rashi cites as the pinnacle of these acts Moses’ shattering of the 10 Commandments. But even more unsettling than that, according to Rashi, when God saw Moses destroying God’s own creation, God remarkably said to Moses, “More power to you for breaking them!”

We scratch our heads and wonder why Rashi chooses to conclude his Torah commentary with this startling episode.  We may have thought that there is no connection between the end of the Torah and the beginning, but thanks to Rashi, now we can see it.

So, let’s proceed to the beginning and read about the creation of the universe, this magnificent planet that God created for us, and the super special place that was seemingly perfect in every way providing unlimited sustenance and safety, the Garden of Eden. Very soon this idyllic setting comes unraveled as Eve and Adam defy God and taste from the Tree of Knowledge of Good and Evil. They are expelled from the Garden of Eden to establish our imperfect world.

And here is where Rashi’s brilliant perspective at the end of the Torah about shattering the tablets leads seamlessly to the retelling of our beginnings. When God’s perfect creation of the Tablets of the Covenant was broken by Moses, only at the end of the Torah do we learn that God responded by saying to Moses “More power to you.”  When God’s perfect creation of the Garden of Eden was fractured by human beings at the beginning of the Torah, I hear God saying to Eve and Adam, “Leave here, but I am empowering you to build this world elsewhere.”  Or put another way, at the end of the Torah and again at the beginning I hear God say, “I gave you something that was perfect, and you broke it. Now it’s up to you to fix it. I am going to help you.”

And indeed, after Moses’ destruction of God’s perfect tablets, the next set of tablets was created by God and Moses together.  This is the relationship that Rashi insists we understand at the end of the Torah before we begin the Torah anew because like those tablets that were re-created, the Garden of Eden may also be re-created in partnership between God and humanity.

The Torah is not ending.  It provides us with the secret of how to understand the beginning – to ennoble us to believe that this time things can be different. Things can be better. We can fix it. With God’s help we can re-create a Garden of Eden and enter it once again.

About the Author
Robert Lichtman lives in West Orange, NJ and is the Chief Jewish Learning Officer of the Jewish Federation of Greater MetroWest, NJ.
Related Topics
Related Posts