The Portion of Shofetim begins with a commandment to establish a judicial system. Jewish judges are commanded to [Devarim 16:18] “govern people with due justice”. We must ensure that our judges are fair, impartial, and do not take bribes. The Torah concludes with an duty of justice not only from our judges, but from ourselves [Devarim 16:20]: “Justice, justice, shall you pursue – so that you may thrive and live in the Land that G-d has given you”.

Last year, R’ Jeff Swartz wrote an article called “Philanthropy is Not Enough” that appeared in the online Sapir Journal[1]. The article compares the concept of philanthropy with the concept of religiously mandated charity, or “tzedakah”. R’ Swartz comes out firmly on the side of tzedakah: “Tzedakah is our Jewish worldview, and it beats philanthropy. Tzedakah demands accountability, not just to the tax code, but to eternal standards. It is fully inclusive and it is rooted in humility. Whether rich and powerful by wealth, or innovative and creative by genius, all Jews are in covenant to a vision that is beyond contemporary mores. Jewish destiny will be better served by Jews making tzedakah, pursuing justice together, rather than by Jews giving charity.” R’ Swartz begins his article by noting that the root of the Hebrew word for charity, “tzedakah”, is “Z-D-K” – “tzedek”, or “justice”.  He quotes the above-mentioned verse from the Portion of Shofetim, “Justice, justice, shall you pursue” and notes that “G-d commands us to pursue justice – an unrelenting and yet circumscribed imperative that is a fundamental principle of the Jewish worldview. Pursuit is an asymptotic aspiration that implicitly recognizes that justice is divine. Tzedakah is rooted in this awareness of human limits and is commanded within this framework of radical humility.”

This is where my understanding and the understanding of R’ Swartz diverge. With thirty years of missiles under my belt, the word “pursuit” makes me think of something else, entirely. It makes me think of “Pure Pursuit”. Before we continue, we need a little background in “Missile Guidance”. “Missile Guidance” is a family of methods that are used to take a missile from some arbitrary starting point and attitude to a desired end-point. While guidance is a critical ingredient in any kind of missile, this essay will concentrate on a missile that is trying to intercept a moving airplane. In this type scenario, the missile is usually called the “pursuer” while the aircraft, which does not want to be shot down, is called the “evader”. The most basic method of guidance is called “Pure Pursuit”, or, in Hebrew, “Redifat Kelev” – “Dog Chase”. With Pure Pursuit (PP) guidance, the missile always tries to aim itself so that it is flying toward the target. Eventually, PP guidance turns into a “tail chase”, in which the missile is running after the target trying to catch up with it. If the missile can fly faster than the target, even briefly, then the missile will eventually overtake the target and destroy it. The problem with PP guidance is that it requires that the missile have a powerful and long-burning rocket motor to give it sufficient speed and range. For this reason, PP algorithms are typically used only against slow-moving and non-manoeuvring targets. 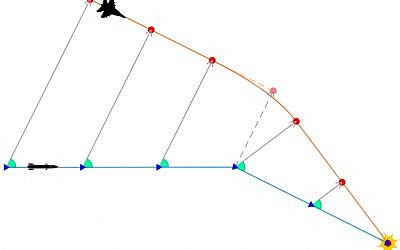 A far better guidance method is called “Proportional Navigation”, or, in Hebrew, “Nivut Yachasi”. The idea of Proportional Navigation (PN) is that the missile should turn its nose at a rate proportional to the rotation rate of the line-of-sight to the target and in the same direction. Setting the math aside[2], PN is based on the fact that two vehicles are considered “on a collision course” when their direct line-of-sight angle does not change direction as the range closes. Looking at the figure, see how the missile moves in a way such that the line connecting it to the target is always at the same angle. As the distance closes, target features become more prominent and the missile can lock-on the target. Eventually, the pursuer and evader collide and this game is over.

The curious reader is almost certainly asking himself what any of this has to do with tzedakah. Direction can be found in the commentary of the Chacham (Wise Man) Yossef Chaim of Baghdad, also known as the “Ben Ish Chai”. The Ben Ish Chai directs our attention to the Torah’s commandment to give tzedakah [Devarim 15:10]: “Give readily (naton ti’ten) and have no regrets when you do so, for in return G-d will bless you in all your efforts and in all your undertakings”. Why should a person have regrets when he gives tzedakah? According to the Ben Ish Chai, regret comes not from stinginess, but, rather, from concern. King Solomon writes [Parables 15:27] “He who spurns gifts will live long.” By giving the poor person a gift, we are actually harming him. When the Torah commands the pursuit of justice “so that you may thrive and live in the Land”, it is addressing this concern, assuring us that the person who gives tzedakah benefits as much as the recipient. Not because “what goes around comes around[3]”, but, rather, because the act of giving tzedakah positively changes a person. To understand how this transpires, we return back to our anti-aircraft missile.

Using PP guidance, the missile nearly always ends up in a tail chase. The pursuer always sees the back of the target[4]. It chases the target until it either runs out of energy or it impacts the target, whatever happens first. Implementing the metaphor of PP guidance, the person giving tzedakah sees the recipient as an object. One cannot help but be reminded of the verse in which G-d tells Moshe that He will always remain clouded in mystery [Shemot 33:23]: “You will see my back, but my face will not be seen”. The two people do not “meet” as much as the recipient is overtaken and disposed of.

With PN guidance, the trajectory of the pursuer is very different. The key parameter in PN guidance of the missile is the line-of-sight angle and its rate of change. When the intercept begins, the pursuer is commanded to change its own direction four times faster than the change it experiences in its line-of-sight to the target. The pursuer and the evader then become aligned in an orientation in which the two approach a common point while their relative distance closes. Using the tzedakah giver-recipient metaphor, the first thing the giver must do is to drastically change his point of view. He must align himself so that he can see the recipient’s features from a different angle. As he closes the distance between himself and the recipient, the recipient’s human features become more prominent and the pursuer locks in on them. Eventually, the two meet, not in an act of philanthropy but in an act of collaboration in which, to paraphrase the Ben Ish Chai, the giver gains as much as the recipient.

The Rambam, writing in Hilchot Tzedakah [10:7-14], describes eight “Levels of Tzedaka”. The lowest level of tzedakah is in which a person gives unwillingly. He does not give willingly because he sees the recipient only from behind. The first goal is to change the aspect angle between these two people. In the next level of tzedaka, the giver still gives inadequately, but now he gives gladly and with a smile. At this stage, his perspective has changed. Once this has occurred, future changes in the level of tzedakah become quantitative as the distance between giver and recipient close: First he gives after being asked. Then he then gives before he is asked, handing the tzedakah to the recipient. As he rises to even higher levels, personal identities become progressively blurred. Finally, the pursuer and evader meet: “The greatest level, above which there is no greater, is to support a fellow Jew by… entering into a partnership with him… in order to strengthen his hand so that he will not need to be dependent upon others”. This game has only just begun.

[2] Mathematically stated, , where N is usually set to 4.

[4] With earlier generation missiles, this was helpful as the seeker could lock on to the hot engines of the target. Today’s infrared seekers are much more sensitive and operate at all aspect angles.

About the Author
Ari Sacher is a Rocket Scientist, and has worked in the design and development of missiles for over thirty years. He has briefed hundreds of US Congressmen on Israeli Missile Defense, including three briefings on Capitol Hill at the invitation of House Majority Leader. Ari is a highly requested speaker, enabling even the layman to understand the "rocket science". Ari has also been a scholar in residence in numerous synagogues in the USA, Canada, UK, South Africa, and Australia. He is a riveting speaker, using his experience in the defense industry to explain the Torah in a way that is simultaneously enlightening and entertaining. Ari came on aliya from the USA in 1982. He studied at Yeshivat Kerem B’Yavneh, and then spent seven years studying at the Technion. Since 2000 he has published a weekly parasha shiur that is read around the world. Ari lives in Moreshet in the Western Galil along with his wife and eight children.
Related Topics
Related Posts