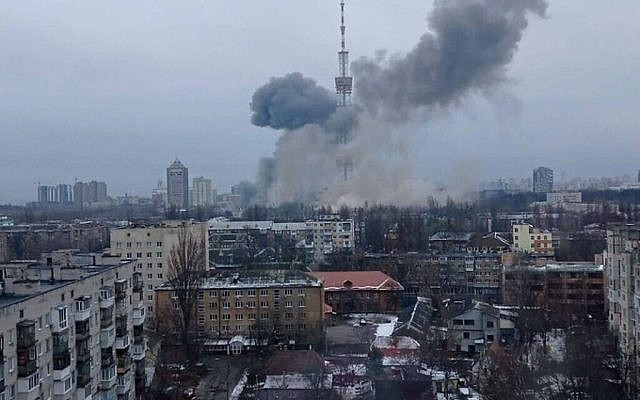 Smoke was seen rising from the Kyiv district that contains the TV tower and the Babyn Yar memorial (Photo: Twitter)

One hundred and twenty-eight years ago, my grandfather – an energetic and adventurous young man, by his own account – arrived in Britain, bringing, so family legend has it, his parents with him rather than the other way round.

He was, apparently, an only child, very unusual in the days when Jewish families were sibling rich. I suppose there might have been other brothers and sisters who either died young or elected not to join my great-grandparents and their son.

In any case, with almost no education, he found a warm welcome in the Jewish community of Manchester and, once married, went on to found his own mini-dynasty of eight children.

And where had he come from? Well, of course, Ukraine. Berdychiv to be exact, which is about 120 miles south-west of Kyiv, and is in the Zhytomyr region of Ukraine. It is a city perhaps more familiar to us as Berdichev, a place where, at the end of the 19th century when my grandfather and his parents were living there, Jews comprised around 80 percent of the population. They had the pick of 80 synagogues!

Like everyone else, I expect, I have been glued to the news this week about Ukraine, and, of course, with my little bit of skin in the game, wondering whether there remained any relations, no matter how distant.

If people ever asked where my family was from I used to say offhandedly, “Russia”, because, to be honest, Ukraine was a closed book to me.

And when I began to learn a little about what had taken place during the Holocaust to Ukraine’s Jews, and the collaboration of Ukrainian nationalists with the Nazis, I was profoundly grateful that my grandfather had shlepped his parents out of the country.

This feeling only intensified a few years ago – pre-pandemic – when I went to Kyiv to report on the building of a grand museum and memorial on the site of those murdered at Babyn Yar.

But, as with so many issues, it’s not all black and white. It was certainly true that there were still Ukrainian nationalists who celebrated the actions of Second World War collaborators, and who insisted on honouring them.

But there were also large numbers of people who wanted to honour the Jewish community – and those who wanted to make a distinction between the former Soviet Union and Ukraine. Natan Sharansky, it’s worth remembering, was born in Ukraine – in Donetsk – when it was under Soviet rule. But he made an appearance at the launch of the Babyn Yar memorial as a son of Ukraine, not as an ex-Russian.

And today, with great pride, we can point to the leadership of Volodomyr Zelensky, Ukraine’s unashamedly Jewish president, representing his country with panache and courage. Zelensky is often mocked as a former comedian, but he won the 2019 election in a landslide victory and – at the time of writing – is displaying great bravery in the face of Putin’s aggression.

I’ve watched the women of Ukraine making Molotov cocktails, ready to defend their country against the heavily-armed Russian forces. I’ve read about the families sleeping in basements, and listened to the Ukrainian ambassador to the UK on the radio talking about his 74-year-old mother spending nights in her Toyota.

And I couldn’t understand why I was so obsessed with this story. Except that, if my grandfather hadn’t been so determined and mule-ish… well, you know the rest. Either one more Holocaust statistic in the murder pits of the Ukrainian forests, or facing up to Putin today. So thank you, Grandpa.