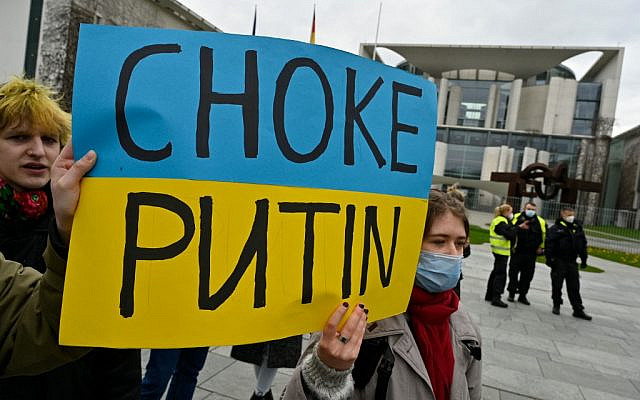 Demonstrators hold a placard reading 'Choke Putin' in front of the Chancellery in Berlin as they protest, on February 24, 2022, against Russia's invasion of Ukraine. (John Macdougall/AFP)

With the brazen Russian invasion of Ukraine, it is important to try to understand how this happened and how to respond.

This act of war didn’t occur in a vacuum. Russian President Vladimir Putin had said as early as 2005 that the “collapse of the Soviet Union was the greatest geopolitical catastrophe of the 20th century.”

What he really missed was the power, grandeur, and fear the Soviet Union had projected, which, in his mind, was squandered by the weak, feckless leadership of Boris Yeltsin in the 1990s, who had turned his country into a lapdog of the West.

Putin was not willing to sit on the sidelines as Washington and Beijing wrestled with one another to shape the direction of the 21st century. He wanted to be in the ring with them.

And Putin didn’t just give voice to that vision, but began to give it form in Georgia, Belarus, Transnistria, Kazakhstan, and in Ukraine as early as 2014, when he seized Crimea and Donbas.

And, as is well known by now, he probed opportunities in the United States to extend his reach and influence, and thereby try to shape the political debate.

What he, a trained KGB officer, saw doubtless gave him the belief that he might well succeed in his, yes, imperialist aims.

Many Western leaders consistently underestimated him. It’s the old story of a failure of imagination, combined with a dose of overconfidence and some wishful thinking thrown into the mix.

President Bush thought he saw the Russian leader’s soul in their Ljubljana summit. President Obama mocked Mitt Romney for suggesting that Russia was our foremost foe. President Trump believed he could use his salesman’s skills to flatter Putin, someone he professed to admire. And President Biden was convinced that Putin didn’t want to see him win the 2020 election because he knew how to to go “toe to toe” with the modern-day czar.

Moreover, Putin surely observed a West he believed to be exhausted by endless conflicts in the Middle East, humiliated by a hurried exit from Afghanistan, deeply polarized domestically, preoccupied with the two-year-battle with COVID, and, despite (or perhaps because of) ambitious climate change goals, ironically, increasingly dependent, for now at least, on abundant Russian oil and especially gas.

And he may have reasoned that President Biden was elected to end, not start, wars, while French President Macron was heading for an election, and Germany was under new leadership, with a presumed more sympathetic Social Democratic Party at the helm.

Hence, the moment to strike — and in winter, of course, when any halt to Russian gas supplies could inflict lots of pain in recipient nations — was now.

In the face of such naked aggression and blatant violation of international law, what might be done to punish Russia, absent direct military confrontation?

First, a unified Western response must not only be forged, as is impressively the case right now, but sustained. That’s easier said than done. Putin must be counting on cracks in that unity, all the more so as time passes and economies take hits from the imposition of sanctions. Surely he believes that at least some Western governments and societies won’t for long accept higher energy prices, reduced exports, higher unemployment, and endless political turmoil before slowly returning to a more business-as-usual approach.

Second, soft power without convincing hard power doesn’t work with the Putins of the world. Dialogue and diplomacy are obviously important tools, but limited in their impact absent a strong military and the will to project power when necessary. NATO member states, for starters, need to take that message to heart.

Third, nations laudably seeking to reduce environmental risks cannot become purists, somehow believing that such policies have no collateral consequences. If the U.S. reduces its own production, in the short term it becomes more dependent on producer nations like Russia, which is, in fact, the case today. And if Germany eliminates all nuclear power plants, and is linked umbilically to Russia via one or two Nordstream pipelines, there are bound to be geopolitical ramifications.

Fourth, the Western public cannot be silent or complacent when the fate of a nation — whose aim, let’s recall, is to become part of that values-based community — is invaded and occupied.

Where are the vigils, protests, rallies, and campaigns? Where are the calls to avoid travel to Russia, stop purchase of Russian goods and services, and boycott sports, cultural, and other programs involving Russia?

And where are the stepped-up efforts to investigate, expose, and block the Russian activity that seeks to undermine Western countries by interfering in their political systems, buy influence, manipulate the media, and park vast amounts of dubiously acquired wealth?

Finally, let’s bear in mind that what happens in Ukraine doesn’t stay in Ukraine. China, North Korea, Iran and other problematic countries are watching the unfolding events with microscopic attention. The world could become even more dangerous if they conclude the West is not up to the moment, allowing a tempting opportunity for them and still more challenges for the US and its partners.

And what are the future prospects of denuclearization anywhere, if Ukraine, home to the world’s third largest nuclear arsenal until the 1994 Budapest Memorandum (signed by the US, UK, Russia, and Ukraine, and guaranteeing Ukraine’s territorial integrity and sovereignty in exchange for abandoning those weapons) is effectively lost to a predatory neighbor?

It may not be useful to make direct historical comparisons, but, since Putin himself spoke of the need to “denazify” Ukraine, let’s call a spade a spade.