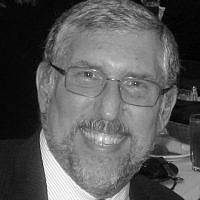 The Blogs
Elliot Chodoff
Political, military, strategic analyst
Apply for a Blog
Advertisement
Please note that the posts on The Blogs are contributed by third parties. The opinions, facts and any media content in them are presented solely by the authors, and neither The Times of Israel nor its partners assume any responsibility for them. Please contact us in case of abuse. In case of abuse,
Report this post. 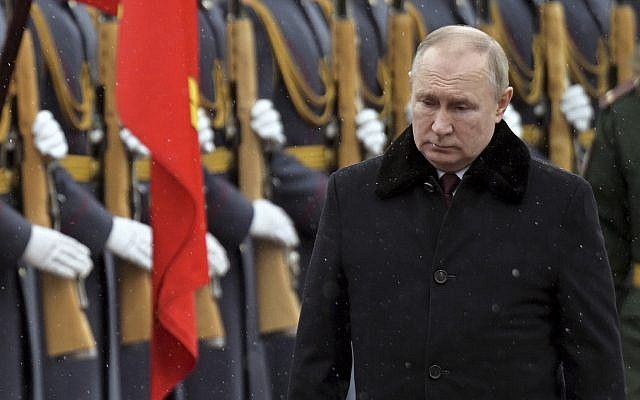 Russian President Vladimir Putin attends a wreath-laying ceremony at the Tomb of the Unknown Soldier, near the Kremlin Wall, during the national celebrations of the 'Defender of the Fatherland Day' in Moscow, Wednesday, Feb. 23, 2022. (Alexei Nikolsky, Kremlin Pool Photo via AP)

It is unclear whether Russian President Vladimir Putin is in fact a chess master, but there can be no doubt that he has mastered the art of strategy. His machinations concerning Ukraine display the professional finesse of an artist, such that many analysts are befuddled as to his motives, objectives, strategy, and tactics.

As in any well-designed strategy, Putin plans to achieve a number of objectives in a single stroke, while simultaneously positioning himself for the next series of moves. While he would certainly prefer to accomplish as much as possible, his real interest in Ukraine is global-strategic: establishment of a secure land-bridge from Russia to his critical naval installations at Sevastopol in the Crimea to facilitate a Russian challenge against American power in the Eastern Mediterranean. Ultimately, securing the eastern Ukraine is a means, and not and end in itself. It is clearly the next step in a process that began with his conquest of the Crimea in 2014, which secured his hold on the naval base and shipyard.

For Putin, the Ukraine constitutes a complex of challenges and opportunities. Until the fall of the Soviet Union in 1991, Ukraine was under Russian control. Putin has stated that the collapse of the Soviet Union was “the greatest political catastrophe of the (20th) century” and that Ukraine is “not really a country”, so continuing the conquest that he started with the invasion of Crimea could also be ongoing irredentism.

Furthermore, with independence, Ukrainian leaders have flirted with NATO, and that membership in the alliance is still on the table. The possibility of a NATO presence along the length of Russia’s southern border constitutes an intolerable threat that Putin means to eliminate as well. A Russian Ukraine invasion would set NATO off balance beyond taking that country off the potential alliance recruitment list. Already faced with a classic deterrence dilemma concerning Russian designs on the Baltic States, NATO is in a poor position to contend with Russian military activity in the Ukraine. However, NATO inaction now will likely be interpreted as weakness, especially after the Biden “invasion/incursion” faux pas which gave Russia an implicit green light to move forward militarily. Conversely, a NATO military bolstering of the Baltics could be interpreted by Putin as a threat that requires action similar to that of Ukraine. A Russian move into Ukraine also implicitly threatens Turkey, a NATO member and traditional centuries-old Russian foe, as well as the Balkans, long an area of NATO interest and involvement.

While all of these scenarios are relevant, they don’t address the central strategic issue. Putin is maneuvering to shore up and improve his positions before embarking on a grand strategic move to challenge the United States’ position as the sole remaining global superpower and return Russia to what he believes is its rightful place in the global power structure. This challenge will be based primarily on sea-power, and that presents critical prerequisites peculiar to the Russian situation.

Russia has traditionally suffered from a lack of warm water ports: naval bases that are not subject to being iced in over the winter. Russia’s existing domestic bases are either north of the artic circle (the Northern Fleet on the Barents Sea) or problematically surrounded by NATO members (the Baltic Fleet at Kaliningrad). The Northern Fleet, currently Russia’s primary naval force for projecting power into the Atlantic Ocean, is thus currently severely limited in capability of year-round operations. A one-two punch against Ukraine followed by opening a strategic corridor to Kaliningrad would decisively repair this situation, giving Russia improved access to both the Atlantic and the Eastern Mediterranean, while the US Navy is focusing on China in the Pacific Ocean and Iran in the Persian Gulf. With naval bases already in Syria, this threat also greatly affects Israeli security.

The Russian Navy does not currently have the power to engage the US Navy or NATO in open warfare. With a single aircraft carrier beset with maintenance problems and limited numbers of other surface ships compared to its Western adversaries, Russia’s capabilities today are limited to low-intensity challenges and mischief-making. Nonetheless, for Putin, staying in the game and on the board is an important short-term goal, while working to change the balance. Under these circumstances, position counts, even without the power to exploit it at the moment.

The move on Ukraine is best seen as a bishop’s gambit in chess: the movement of a mid-level-value piece primarily to gain position and set up a later move that will ultimately threaten the opponent’s key pieces, the queen, and ultimately, the king. If the bishop is mauled as a result, that is an unfortunate but acceptable price to pay for gaining the advantage.

While the West dithers over tactical questions of whether Putin will launch an “invasion” or an “incursion” and treating the Ukraine crisis as if it were the primary scenario, the Russian president is operating on a grand strategic level, threatening with his bishop to support his well-placed rook in Sevastopol, and waiting for the opportunity to move his other rook into position in the Baltic Sea.  He has not lost sight of the fact that the ultimate objective of the long game is Mate – the immobilization of the opponent’s king – and not a skirmish between expendable bishops and pawns.

About the Author
Elliot Chodoff is a political, military, and strategic analyst focusing on the Middle East and the global war on terrorists. He lectures extensively to groups in Israel and abroad. He made Aliyah from the United States in 1983.
Comments