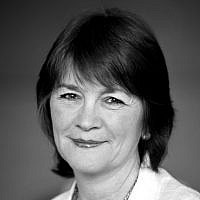 The Blogs
Lesley-Anne Knight
Apply for a Blog
Advertisement
Please note that the posts on The Blogs are contributed by third parties. The opinions, facts and any media content in them are presented solely by the authors, and neither The Times of Israel nor its partners assume any responsibility for them. Please contact us in case of abuse. In case of abuse,
Report this post.

Ahead of his fifth visit to the Middle East since January, US Secretary of State John Kerry warned that the window of opportunity for a resumption of talks between Israelis and Palestinians was narrowing. “Time is the enemy of a peace process,” he said in Kuwait last week.

The Elders, a group of independent global leaders who work for peace, justice and human rights, have repeatedly warned that the two-state solution may soon be out of reach. They consider the expansion of Israeli settlements beyond the Green Line as one of the main impediments to the establishment of a viable Palestinian state living side by side with Israel in peace and security.

Several measures on settlement trade are currently being discussed by the 27 EU members, including the introduction of EU-wide labelling guidelines for settlement goods imported into Europe. Proper labelling, as already implemented in the UK and Denmark, would protect European consumers’ rights to accurate information by allowing them to distinguish what is manufactured in Israel from products originating in illegal settlements, such as dates, avocados and cosmetics.

The Elders have been supporting this move, which they see as a small but concrete step to help put the Green Line back on the political map and thus revive the two-state solution.

The Elders have met with many Palestinians and Israelis who share the same hope and call on Europe to take action on settlement products labelling. Their voices, including those of Avrum Burg, former Speaker of the Knesset, Alon Liel, former Director General of the Israeli Foreign Ministry and Semma Quran, from Ramallah-based NGO “Palestinians for dignity,” are featured in our video “Labelling Israeli settlement products will help put the Green Line back on the map.”

While the Elders fully support current US efforts to bring the parties back to the negotiating table, they also encourage the European Union to play a stronger and more independent role in the region.

Settlements are considered illegal under international law, a point of principle the European Union has repeatedly stated. The EU has also repeatedly urged Israel to “immediately end all settlement activity”. Yet, a recent report by NGOs revealed that Europe currently imports 15 times as much from the Israeli settlements as it does from the Palestinians.

“By trading with settlements, Europe is inadvertently shoring up their economic viability and contributing to their permanence,” former Finnish President Martti Ahtisaari and former Irish President Mary Robinson wrote in December. “It is also stifling the chances of economic development in the West Bank, undermining the billions the EU is investing in Palestinian state-building.”

As Israel’s main trading partner, Europe has the potential to alter the current stalemate by making clear the distinction between Israel within the pre-1967 borders and Israeli settlements beyond the Green Line in the West Bank and East Jerusalem.

About the Author
Lesley-Anne Knight is Chief Executive Officer of The Elders, a group of independent global leaders working for peace, justice and human rights
Comments