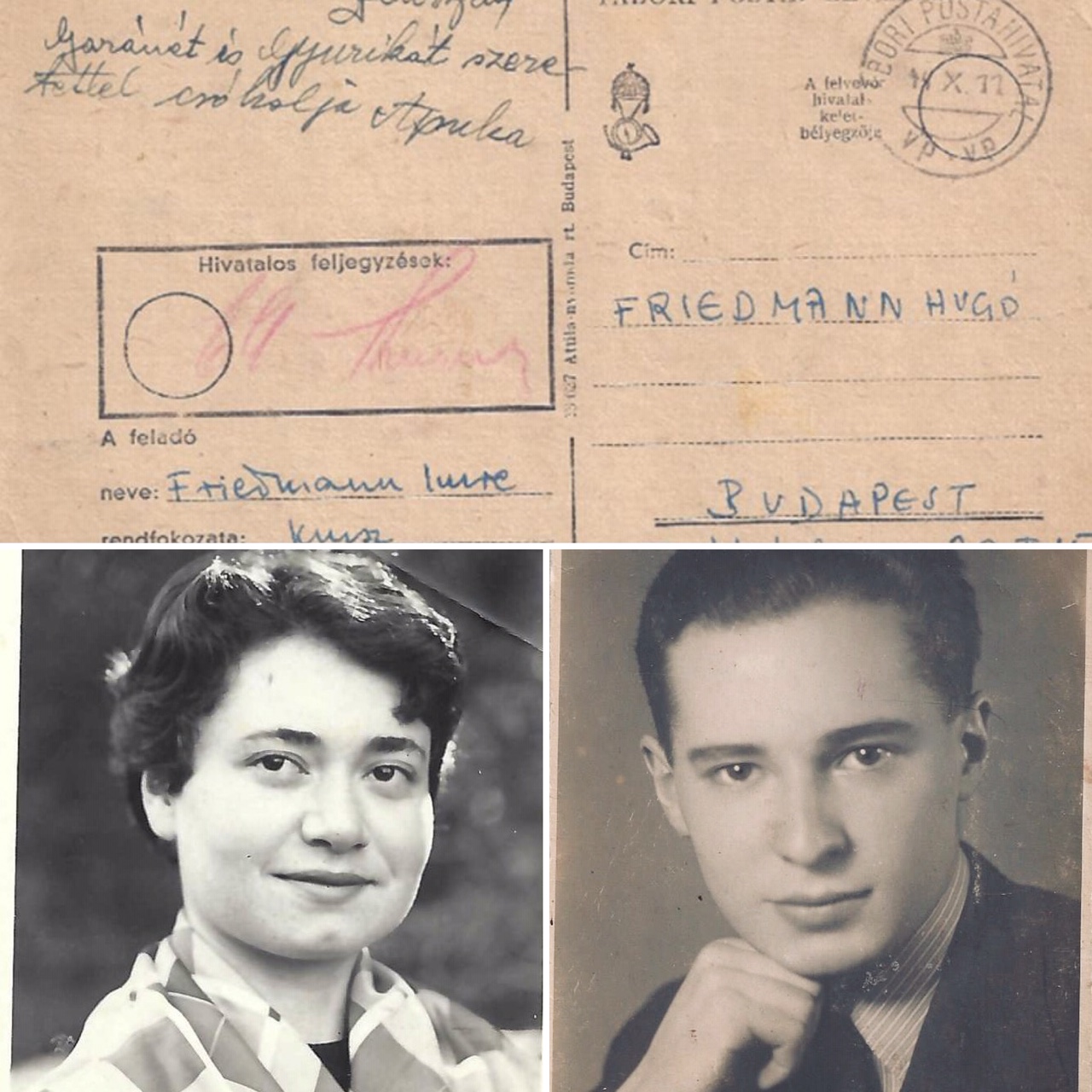 Postcard sent by Imre Friedmann to his parents from a forced labor camp. Naomi Kraus and Imre Friedmann survived the war and became accomplished scientists. Images courtesy of Daphna Robon.

At a time of great concern about whether and how anti-Semitism is taught in educational initiatives focused on diversity and inclusion, a daughter of Holocaust survivors is demonstrating that individuals can make a difference. As the world was shutting down due to COVID-19, Daphna Robon decided it was time to take the bumper sticker proclaiming “Change Begins with Me” off her car and put those words into action.

Over the past year, she has launched a personal campaign to share her parents’ dramatic true story on Zoom with young students and adults nationwide. Assisted by the Seattle Holocaust Center for Humanity, which had inspired her to display its message of personal empowerment on her car, Robon turned a remarkable family archive of original documents, images and video testimonials into a powerful learning experience.

Starting when most schools and gatherings were shifting from in-person to online, she has already reached 700 participants.  They range from middle and high school students in Texas and Washington, to Seattle-area community groups, a Rotary Club, and participants in the Center’s weekly online Lunch-and-Learn series.

Robon is passionately committed to sharing a true story that is emotionally wrenching for her each time she tells it.  Her Hungarian-born parents faced pervasive anti-Semitism throughout their early lives. Her father, Imre Friedmann, was initially denied university admission despite being an award-winning high school student. His family was forced from their home, which Robon illustrates with an actual Nazi-era eviction notice ordering a Jewish family to move in with others. Sent to a labor camp, he barely escaped a death march when another labor camp prisoner disguised as a Hungarian soldier rescued him.

SURVIVING WITH HELP FROM UPSTANDERS. Robon’s compelling presentation highlights several heroes she calls “upstanders” who courageously aided her parents at great peril to their own lives. More than half a million Hungarian Jews were murdered by the Nazis and most of Robon’s relatives were among them. Her mother, Naomi Kraus, obtained false identity papers and was taken in by a family who may not have known her true origin. Both parents miraculously survived and made it to Israel after the war. They met for the first time on a blind date in Jerusalem, where her father was a faculty member at Hebrew University. Both became accomplished PhD scientists and had distinguished academic careers following immigration to America.

“There is no better use of my time,” says Robon, a professional real estate broker and attorney who was born in Israel and grew up in Houston, Texas.

Thanks to the Zoom format, she is available to schools and other groups anywhere who recognize the importance and impact of firsthand stories in the ongoing struggle against anti-Semitism.  While honoring her parents’ bravery, resilience and perseverance, Robon is also demonstrating that “Change Begins With Me” can be much more than a bumper sticker.

TO LEARN MORE.  Watch a video recording of Robon’s presentation hosted by the Holocaust Center for Humanity. To schedule a presentation for your organization or school, email Daphna@DaphnaRobon.com.