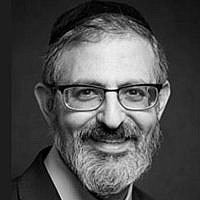 The Blogs
Ezra Y. Schwartz
Apply for a Blog
Advertisement
Please note that the posts on The Blogs are contributed by third parties. The opinions, facts and any media content in them are presented solely by the authors, and neither The Times of Israel nor its partners assume any responsibility for them. Please contact us in case of abuse. In case of abuse,
Report this post.

Since the passing of Queen Elizabeth II a few days ago, I have found myself inexplicably interested if not intrigued by everything royal.  I gravitate towards articles about the queen’s life, about the plans for her funeral, about how Charles III, the new king, is proclaimed and will be coronated.

I am not sure what fascinates me about the queen in particular and British royalty in general.  After all, the queen was merely a figurehead; a ceremonial relic of the past who held no power and wielded only minimal influence.  Perhaps I am intrigued by the longevity of her reign.  There are so many changes in the world since 1953 when Elizabeth assumed the throne.  However, Queen Elizabeth remained a constant.  Perhaps I am impressed by the way Elizabeth maintained her regal demeanor even as her empire constricted around her.  She concluded her reign with a monarchy that rarely sees the sunlight rather than one that never sees the sunset.  Perhaps it is her dignity, reserved manner and adherence to tradition that intrigues me.  I don’t know what it is. All I know is that I currently find myself enthralled with royalty.

Of course, all the pieces penned about the queen emphasize her failings as they adulate her.  Few are uncritical of her handling the death and funeral of the much beloved Princess Diana and the other foibles of her royal family.  But these failings only make her more intriguing in my eyes.  There  is something about the queen, something about royalty that I am drawn to.

Queen Elizabeth II was by far the best known monarch of our time; if not the only monarch many can identify.  Her passing forces us to confront the meaning of monarchy in general; its values as a system of governance and its failings.  All the pomp and ceremony that we will witness over the next few days, weeks and months will force us to confront monarchy, an institution we rarely think about but was so dominant for so much of world history.

We stand now in the shadow of Rosh Hashana; the day when humanity began and Hashem was coronated, as it were, as sovereign.  Although there are three major themes of Rosh Hashana prayer, Malchiyot, Zichronot and Shofarot, clearly our prayers are dominated by the theme of malchut Hashem the majesty and regal splendor of the Supreme  King.   In the wake of Queen Elizabeth’s passing, I cannot help but contrast the Queen’s role, her influence, manner and majesty with the Jewish notion of malchut Hashem that we mark on Rosh Hashana.

I am not the first to contrast the royalty of Hashem with temporal monarchy[i].  Already under the Roman/Byzantine Empire, R. Eleazar b. Kallir composed the piyyut Melech Elyon, the Supreme King, which is today recited in Musaf of the first day of Rosh Hashana in virtually all Ashkenazic congregations. Later on, in the tenth-to-eleventh century, Rabbi Shimon of Mainz composed a similar piyyut, which is recited in Shacharit of the second day.  Melech Elyon does just that; it contrasts the Supreme King we coronate on Rosh Hashana, with the King medieval Jews were accustomed to.  It stresses the glory, strength, purity and power of the Supreme monarch with the feebleness and impotence of medieval and ancient Kings.   However, the piyyut as it is found in our machzorim, is incomplete and does not fully accentuate this contrast.

The way we recite, chant or sing Melech Elyon , the piyyut is all about the splendor of Hashem.  Only after the piyyut concludes is the ark closed and we recite in a whisper or perhaps a quiet undertone two stanzas about the mortal, feeble regent that the reader recognized.

It is not simply the tone and volume of our recitation that incompletely highlights the contrast.  The text of the piyyut we recite, as it appears in our machzorim is clearly incomplete.  One who carefully studies the piyut Melech Elyon notes that there are many missing stanzas.  In fact every other stanza is missing.  The piyyut jumps from the letter Aleph to the letter Gimel, from Gimel to Hey and so forth.  Every other stanza is missing.  The missing stanzas, which appear in Daniel Goldschmidt’s machzor, speak about Melech Evyon, the impoverished, destitute king whom the reader of the piyyut was without doubt familiar with.  Unlike the exalted Melech Elyon, the Melech Evyon is disgusting and despicable; he covers his own sins.   He is arrogant and abusive[iii]. The piyyut speaks of how the Melech Evyon who so abuses his throne will eventually face justice.  There is little doubt why these stanzas were censored from machzorim.  Kings simply did not want to be spoken of with such disrespect (even if it was 100% correct).

In many English translations Melech Evyon is rendered the destitute man rather than the impoverished  King.  However it seems clear, from the omission of every other stanza, among other things, that the paytan was contrasting royalty as he knew it, with the Supreme  majesty of Hashem.  The focus is not on the feebleness of mankind in general, but on the foibles, weaknesses and limits of the temporal monarch.

It is worth noting that the paytan contrasts the Melech Elyon with Melech Evyon; the Supreme King is contrasted with the destitute King.  I would have thought that contrasting Melech Elyon with Melech Tachton, the Supreme, Elevated ruler with the lowly, earthly ruler would have been more apt.  However, in light of Queen Elizabeth, I think Melech Evyon is quite a fine choice of word.  Elizabeth did not have authority or might; she was a mere figurehead.   The one thing she had was wealth, castles and jewels.  The Crown Jewels displayed in the Tower of London reveal only a part of the wealth and splendor of today’s most famous monarch.  However, by terming the monarch a Melech Evyon, and when looked at with our contemporary eyes, the piyyut is highlighting that all the wealth and splendor  of monarchy is but a ruse.  In reality, every monarch is destitute, a Melech Evyon.  Wealth rests only with the Divine.

The death of Queen Elizabeth focuses our attention on monarchy something we rarely think about.  The pomp, ceremony, dignity and reserve that accompanied Queen Elizabeth are for most of us a mere curiosity, a relic of a bygone era.   However, coming in the shadow of Rosh Hashana, the passing of Queen Elizabeth places accent on the theme that HaKalir and Rabbi Shimon of Mainz highlighted in their piyyut.  Iniquities, flaws, failings and frailty accompany every monarch.  Every worldly monarch  is ultimately destitute and vacuous, a Melech Evyon.  Only the Melech Elyon is a real regent.

[i] My friend Dr Gabriel Wasserman drew my attention to Tuvia Preschel’s article about the once widespread practice to read Sefer Daniel during the time between Tisha B’av and Rosh Hashana.  Perhaps an idea that underlies this now largely forgotten practice is highlighting what real royalty is.  Perhaps, more than any book in Tanach, Daniel speaks of royalty.  The beginning of Daniel speaks of crazy kings.  The end speaks of the visions of these kings and how they herald the time of true Royalty, the end of days when the rule of Hashem will be manifest in the world.

A very partial translation of the original piyyut is found here: https://www.oztorah.com/2019/10/melech-elyon-the-supreme-king/