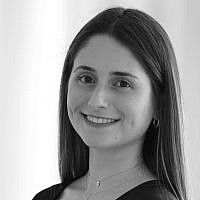 The Blogs
Noa Cohen
Apply for a Blog
Advertisement
Please note that the posts on The Blogs are contributed by third parties. The opinions, facts and any media content in them are presented solely by the authors, and neither The Times of Israel nor its partners assume any responsibility for them. Please contact us in case of abuse. In case of abuse,
Report this post.

One of the most crucial concepts in American constitutional theory is the “separation” of powers. The Framers of the Constitution began with the proposition that concentration of power was to be avoided. Therefore, checks and balances are often seen as crucial guarantees of freedom.

The term “Separation of Powers” was invented by Montesquieu in the 18th century. The idea of separation of powers divides the government into separate divisions with unique abilities. The system of having multiple branches of government helps to ensure no component is more dominant than another. In most cases, separation of power divides the government into three sections: the Legislative Branch, the Executive Branch, and the Judicial Branch. Those departments also exist in the United States federal government. The main leverage of checks and balances is, of course, the fact it reduces the likelihood of lousy legislation becoming law. On the other hand, checks and balances also minimize the possibility of good legislation becoming law. It seems like there is an inner contradiction in checks and balances that can never be fully solved.

Watergate Scandal is an excellent example of violating checks and balances in the United States. The incident was a series of crimes committed by President Nixon and his staff, who were found to have spied on and harassed political opponents, accepted illegal campaign contributions, and covered up their misdeeds. The former president tried to hold any evidence in the Watergate controversy that could prove him guilty. However, the system proved its effectiveness and prevented any evidence from being hidden. Nixon even made a statement about the necessity of the system: “It is essential now that we place our faith in that system – especially in the judicial system. We must let the judicial process go forward, respecting those safeguards established to protect the innocent and convict the guilty. It is essential that in reacting to the excesses of others, we do not fall into excesses ourselves.”

Some believe that democracies cannot survive without the concept of separation of power. It is crucial in some scenarios, but in other cases, it leads to stagnation and the inability to act. It is naïve to believe the separation of power is entirely carried out. In many countries and the United States specifically, we can sense some authorities use their capabilities to bypass the system. Not only the Nixon case, but a more recent example is Donald Trump. During his presidency, he has proved how fragile the constitutional order can be when a president does not respect the rule of law. He perceived the law as a weapon with which he could reward loyalists, revenge enemies, and frighten everyone else. Due to the slowness of courts, Trump discovered he could sustain violations for years. In addition, Republicans in Congress have consistently chosen Trump over the Constitution. The former president recognized the Executive branch and himself as unbeatable; this is a shameless violation of the holiest principle of the United States.

Maybe there is a concrete reason for two presidents to tamper with the principle of checks and balances? Perhaps equal power is not the best solution for our dynamic, changing world.

We cannot discuss the issue of power balances without addressing the recent US supreme court scandal regarding abortion rights. This June, the supreme court ruled there is no constitutional right to abortion in the United States. According to Pew Research Center, 62% of Americans believe abortion should be legal in all or most cases. Current president Joe Biden strongly opposes this resolution as a pro-choice democrat. In this instance, the supreme court has stepped down from its responsibility to ensure the democratic system works. If power was not distributed equally, the government that opposes this call could make a difference for millions of innocent women who no longer have control over their bodies. The power equality leads to situations where the offices do not align with each other, weakening the state and preventing the flow of decision-making.

There are endless examples of checks and balances, advantages and disadvantages. Today’s reality is more complex than before, from social division and inequality to global pandemics, worldwide economic crisis, and political instability – the world we live in today requires a different approach.

It is a serious question to discuss; what is more critical – avoiding extremism or considering the needs of the people? Therefore, I am afraid there is no correct answer. The values of keeping the power balanced and creating a specific policy that suits the larger society contradict each other constantly.

The United States population is highly diverse nowadays – the gap between Republicans and Democrats, once considered meditated, is now irreversible. The young generation is unwilling to compromise, aiming for a better world. However, to get there, we witness more extremism in the United States, destroying social harmony. Being a Republican or a Democrat has become more than political affiliation; now, it is a way of living. Thus, reaching any compromise or agreement is almost impossible, so the situation will remain the same.

If we do, however, approve more power to a specific authority, we cannot guarantee there will be no tyranny of power and its consequences. Still, I believe that providing more control to a particular branch in exact circumstances could be helpful in terms of legislation and decision-making. Democracy means the people’s rule, but Americans do not fully agree about who the people are.

Democratic systems are not designed for virtuous leaders. If they were as noble as they wished, there would be no need for checks and balances, and the United States’ founding fathers understood this. The balanced system they designed was meant to protect minorities, protect the people from leaders cheating and lying, and paradoxically to cover the majority against minorities who could threaten the constitutional order.

We cannot have it both ways. The system contradicts itself from within in a way one side will always be unsatisfied – whether it is the majority of minorities. These effective decisions harm others or lead to no settlements at all. We, as a society, should be critical and not take democracy policy for granted. Only by questioning the current policy and evaluating other alternatives we could eventually reach other opportunities.

Currently, various democratic governments started to embrace authoritarian tactics, mainly because of Covid-19 and the tools used to slow the spread of the pandemic. More than two-thirds of the world’s population now live in autocratic regimes or backsliding democracies. Perhaps less-democratic governments are the solution to the stagnation? Is it possible that authoritarian regimes know what is best for their people?

I am frustrated to admit I cannot conclude the analysis. I asked my family and my friends’ opinions, and none of them had a clear answer. I am afraid it only means this is a phenomenon not discussed enough. Then yes, both values are significant and equally important; it is impossible to determine what value is at the top. However, this will not be over soon in a polarized society like ours.

About the Author
Noa was born and raised in Kfar Saba. She is a third-year Government student at Reichman University, currently in the Argov honors program for leadership and diplomacy. Noa interned at the Abba Eban Institute for International Diplomacy, as her main fields of interest are diplomacy and inter-group dynamics.