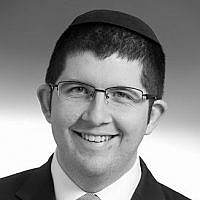 The Blogs
Seth Winberg
Apply for a Blog
Please note that the posts on The Blogs are contributed by third parties. The opinions, facts and any media content in them are presented solely by the authors, and neither The Times of Israel nor its partners assume any responsibility for them. Please contact us in case of abuse. In case of abuse,
Report this post.

Thousands of Orthodox rabbis already hold official positions within the Israeli Rabbinate; they receive state funding for their salaries. Rabbi Amar’s letter enraged plenty of Jewish leaders outside Israel, but almost no Orthodox rabbis outside Israel denounced the Chief Rabbi’s intolerant views. I think Rabbi Amar is wrong. Other rabbis should think so too.

After Rabbi Amar’s statement, MKs from haredi and National Religious parties — including Ya’akov Margi, Yisrael Eichler, Moshe Gafni, and Uri Ariel — called non-Orthodox Jews “unnatural manifestations that have proven themselves a disaster” and “clowns for whom Judaism is a mockery.” These MKs show that the problem is worse than just a chief rabbi’s disdain for non-Orthodox Jews. Some very prominent religious and political leaders in Israel do not value religious freedom for Jews.

Reform and Conservative rabbis are understandably offended and upset. They have been speaking about Rabbi Amar’s letter in their synagogues and on websites. Their surprise is also a little surprising. For decades haredi leaders have denounced non-Orthodox Judaism and opposed democratic values such as religious freedom. The late Rabbi Elazar Shach, recognized as the leader of most of the haredi community until his death in 2001, also denounced non-Orthodox Jews. (He had nasty things to say about Modern Orthodoxy, religious Zionism, and Chabad, too.) And he opposed democracy, calling it “a disaster” and “a cancer.” Rabbi Shach makes Rabbi Amar seem rather tame.

Why aren’t more Orthodox rabbis speaking up? Some probably feel that Rabbi Amar’s sentiments are spot on, but not something to be said in public. Many, like me, feel that Rabbi Amar’s sentiments are way off, but assume people know that already. It should go without saying that open-minded Orthodox rabbis disagree with closed-mindedness. (Last week, Rabbi Amar attributed earthquakes to attempts to draft some haredi men for national service. Do I have to say on the record that I do not share this view, even though I too am an Orthodox rabbi?)

Yet, American Orthodox rabbis have two good reasons to speak up. First, they are uniquely positioned for bridge building between haredi and non-Orthodox Jews. Second, American Orthodox rabbis committed to religious tolerance and democratic values like religious freedom can help Israelis — the majority of whom want religious freedom — to realize those same values and enact policies to safeguard those values. Israel’s critical alliances with the US and Europe are based on Israel’s being a democracy.

It is tempting to sit back and tell ourselves that Rabbi Amar’s hatred of Jews who aren’t like Rabbi Amar will eventually make his office irrelevant in Israel and around the world. Or that Israelis bear most of the responsibility for Israel’s democracy. But American Jews — Orthodox and non-Orthodox — should be more helpful. We, their rabbis, should say loudly that Israel’s democracy depends on religious freedom for all Jews.