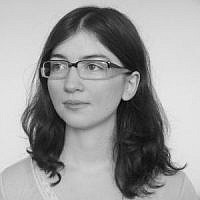 The Blogs
Anna Banasiak
Apply for a Blog
Please note that the posts on The Blogs are contributed by third parties. The opinions, facts and any media content in them are presented solely by the authors, and neither The Times of Israel nor its partners assume any responsibility for them. Please contact us in case of abuse. In case of abuse,
Report this post.

Isaac Avigdor, son of a respectable Rabbi Jacob Avigdor, is etched permanently in the history of Drohobych. In his youth he attended the rabbinical seminars in Europe. He was one of the most important religious leaders of eastern Galicia. He studied philosophy in Lviv. He served as Rabbi in Galicia and Drohobych. During the second world war he was in a number of concentration camps. After the liberation by the American army he took care of the children of refugees in religious villages and kibbutzim in France, Italy, Belgium, Austria and Hungary.

Rabbi Avigdor was the author of books in Hebrew, Yiddish and English and religious articles in periodicals. His first collection of English sermons was released in 1960, the dissertation was devoted to the person of Baruch Spinoza. In 1973 he was awarded the Rabbi Herzog Prize. During his stay in the United States he has been President of the Yeshiva of the name Solomon Kluger and later Yeshiva on Long Island. He was active in the national and international field.  His memoirs from the period of the second world war has been published in the work: From Prison to pulpit. Sermons for all Holidays of the Year and the Stories from the Holocaust.  In fifty sermons he tells the unique story of the Jewish people, with particular attention to the suffering and persecution of the Jews. Author is struggling with questions of faith in Judaism from many points of view trying to understand the phenomenon of the survival of the nation, whose existence in the story is a paradox. Avigdor compares Jews to phoenix recovering among the Nations of the world.

The book of Rabbi Avigdor consists of two parts, sermons and stories (written on the model of the haggadah) that allow the reader to get to know the destruction of Eastern European Jewry. Description of the experience of the Holocaust has been led in a dynamic narrative interspersed with comments of the ancient prophets and commentators. The most interesting remains the second part From Prison entirely dedicated to the liquidation of the ghetto and stay in the concentration camp. Rabbi, despite the torture and family tragedy has not lost faith.

It is the fusion of fact and fiction, personal relationship told by a religious Jew.

Europe before the war was a beautiful, culturally diverse civilization. Annihilation of European Jewry was the greater tragedy than the destruction of the Temple in the days of Daniel.  The Nazis killed most of the members of the family of Rabbi Isaac Avigdor. Drohobych house was turned into ruins and most of the equipment stolen. The Nazis shot the mother of Isaac, a few kilometers from the village on the second day of the feast of Shavuot. They do not spare her numerous family consisting of ten brothers, sisters and cousins. The clothes were brought to the camp. Sister of Rabbi Isaac died in a concentration camp in mysterious circumstances.

Dr. Jacob Avigdor, his younger son Abraham Issachar and Isaac Avigdor survived the destruction, which was a real miracle. The survivors scattered around the world. The memories from the days of doom were closed by touching essays about father Isaac. Jacob Avigdor of blessed memory was for their children a master, teacher and spiritual guide. Anyone who spoke with him felt the divine presence. Isaac Avigdor throughout his adult life was trying to find the family. In the camp at Płaszów he wore personal photos and a small diary with notes and lines, which he wrote in the ghetto. These were the glimpses of Chassidic joy. They were a source of inspiration in times of despair reflecting the changes in the human nature. All photographs, diaries and notes of Rabbi Avigdor burnt down. After the liberation in 1945 he  was among the survivors, friends and family commemorating the Jewish world before the war.  Rabbi Avigdor’ s Haggadah of the Holocaust have ecumenical dimension, they contribute to hermeneutical understanding of the fate of the Jewish people.

About the Author
Anna Banasiak is a poet and literary critic from Lodz, Poland. She studied Polish philology and culture studies at the University of Warsaw. She is the winner of poetry competitions in Berlin, London and Bratislava. Her poems have appeared online via New York, London, Surrey, Australia, Canada, India and South Africa.
Related Topics
Related Posts
Comments