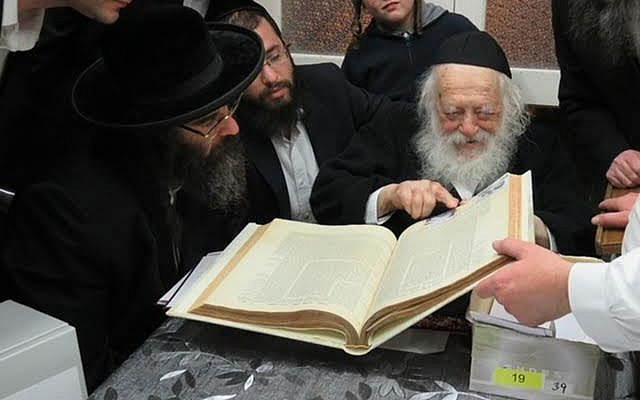 If you squint your eyes and look past the noise and smoke, you will get to see the real Rabbi Chaim Kanievsky, zt”l, and come to appreciate his greatness.

“The share of the man who stayed with the supplies is to be the same as that of him who went down to the battle” (Samuel I, 30:24). Some people are warriors, destined to go out to the battlefield, while others are meant to stay behind, to take care, protect, and replenish the supplies. R. Chaim was slated for the latter and ill-suited for the former. He was never meant to be a warrior. He was thrown into the trenches by others who had ulterior motives.

Shave off the thick obscuring layer of his ill-suited political mantle and you will be able to appreciate his greatness. You will see someone who was madly in love with Torah, published well over 50 books, and finished all of Talmud Bavli, Talmud Yerushalmi, Midrash, Rambam, and Halakha every year — literally.

Torah was his life. His real and only joy was swimming in the yam haTalmud, the vast ocean of our glorious canon. That is how he spent every waking moment. He was not meant to be taken out of the pond. That is when his flippers were flailing, not knowing his way around on dry land and, therefore, vulnerable to being led (astray) by others.

Still, try hard to look past the last few years. If you do, you’ll see a beautiful and sacred soul from a world that is mostly gone. You perhaps may not find someone who shared your notions of halacha, Judaism, and communal norms. But if you want to know what primordial ahavat Torah (love of Torah) looked like, reflect on R. Chaim, zt”l. His infatuation with Torah was pure, unadulterated, and insatiable.

When you think of him, think of the image above: the childish glee when showing off a daf (folio) of Talmud in which he attached some imagery so that he could better understand what he was studying. It is a page in Tractate Menachot, where the Talmud discusses various laws pertaining to conjoined twins. He wanted to better understand the discussion, so he attached a little photo of such a pair to his Gemara.

In the words of the poet: תורתו מגן לנו, היא מאירת עיננו — his Torah is eye-opening and spiritually shields us. Very few people in Jewish history produced as much “eye-opening” Torah as he did.

In the “Sinai and “oker harim” paradigm (see Brachot 64a), a metaphor for breadth vs. creative insight in scholarship, he was more of a “Sinai.” He wasn’t necessarily the most creative and gutsy mechadesh (innovator), but his knowledge of Torah was Google-esque. He had the entire primary canon at his fingertips. He literally knew it all — by heart.

With this amount of knowledge, he was able to shed tremendous light on anything he touched. He wrote on numerous halakhic topics, and after reading his works, you see the topic in a different and brighter light. He was our generation’s R. Meir, שמאיר עיני חכמים בהלכה, the one who sheds [new] light on complex halakhic rulings. His rays of light lit bright sparks across the vast landscape of our expansive tradition.

As his Torah-saturated soul is making its way to heaven, free from his minders, he will be reunited with his father, the Steipler Gaon; his uncle, the Chazon Ish; and his father-in-law, Rav Eliyashiv; and alongside them, he will illuminate the Torah of Shamayim (the heavens) in the yeshiva shel ma’alah.