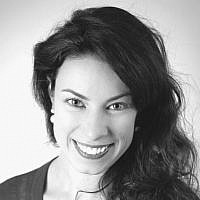 The Blogs
Anya Zhuravel Segal
Apply for a Blog
Advertisement
Please note that the posts on The Blogs are contributed by third parties. The opinions, facts and any media content in them are presented solely by the authors, and neither The Times of Israel nor its partners assume any responsibility for them. Please contact us in case of abuse. In case of abuse,
Report this post.

The headline is an oxymoron: in a state that defines itself as Jewish and democratic, a rabbi has been detained for marrying Jews in a religious ceremony.

Rabbi Dubi Haiyun of Haifa’s conservative community, Kehillat Moriyah, was woken up by policemen at 5.30 am on Thursday, July 19th, and taken in for questioning. Why? He has performed a wedding of two Jews. Through the Midreshet Schechter non-profit, Rabbi Haiyun runs 25 batei midrash (study groups) in northern Israel that bring over 700 people closer to Judaism, but since he is not affiliated with the Chief Rabbinate, the weddings he officiates are illegal and punishable for up to two years in jail under the Marriage and Divorce Law of 1953.

Ironically, R. Haiyun has been scheduled to speak on tolerance and Jewish pluralism at President Reuven Rivlin’s residence in Jerusalem on Thursday night (which, by now, he did). Indeed, as Tisha B’Av, when Jews mourn baseless hatred that led to the destruction of the Second Temple, draws close, what could illustrate the discord within the Jewish people more vividly than a Rabbi detained on complaint filed by the Chief Rabbinate?

Discord is certainly in the air, and there is a powerful bureaucracy instigating it. With 25% of Jewish Israelis choosing to exchange their vows abroad instead of doing so under the auspices of the Rabbinate, the institution is rapidly loosing its credibility and moral clout. Instead of articulating a vision of Judaism that Israeli Jews can relate to, the Rabbinate has chosen to wage a war against rabbis who are not part of this giant bureaucracy. Orthodox, Conservative, Reform – does not matter which stream they are affiliated with, as long as they perform weddings, they can be arrested and sentenced to up to 2 years in prison.

There is certainly a place for debate on the role of religion in the Jewish state. It is a debate that the Chief Rabbinate should be partaking in.  Yet what we have observed this week is not a discussion on values that should inform a shared future for Israelis, whatever their level of observance. It is a power struggle wielded by a dying bureaucracy that is fighting for survival.

The Rabbinate is becoming obsolete, but its grip on Israeli society still holds. Who will be detained next?

About the Author
Anya Zhuravel Segal lives in the Beit Hakerem neighborhood of Jerusalem with her husband and two children. They recently spent ten days in home quarantine after a teacher’s aide in her son’s preschool tested positive for coronavirus.
Comments