We are devastated by the tragic news of the passing of Rabbi Lord Jonathan Sacks, one of the greatest leaders of modern times. Rabbi Lord Jonathan Sacks was truly a giant. His towering intellect, unparalleled eloquence and erudition made him one of our generation’s greatest spokesperson, touching the minds and hearts of Jew and gentile alike. He was one of the most prolific thought leaders of our era, striking a finely tuned synthesis between classic and modern Jewish texts and the highest secular academia too. His command of both the spoken and written word were formidable. Like the conductor of a vast orchestra,  Rabbi Sacks wove a perfectly synchronised symphony spanning from the particular to the universal, drawing on every available instrument in Gods creation. The score he wrote himself, was invariably a masterpiece of piercing intellectual and emotional depth and insight. Well aware of the God given potential placed at his disposal, Rabbi Sacks shouldered his responsibility to inspire Jewish people the world over and mankind as a whole.

Seldom do we meet the person who looks themselves in the mirror, has the strength of character and integrity of purpose to navigate between their own talents and shortfalls, failures and successes. He possessed the unique ability to combine high intellect with penetrating emotion and heartfelt humanity and care for all. That he was possessed of staggering intellect and awesome capability is incontestable. In my mind however, it is his steadfast commitment to unswervingly shoulder responsibility as a proud Jew and a leader that stands out as an example to us all. He was disarmingly candid about his natural failings and met many an obstacle in his life, both of a communal and personal nature. Yet, from the point in life at which he made the decision to stand up and shoulder a position of leadership, he never stopped communicating Gods word to both the loftiest of minds and simultaneously to the man in the street. He pierced the hearts and minds of both.  Rabbi Sacks harnessed his talents to the full in order to maximise his contribution in this world. On many an occasion and at numerous junctures in his life, with over thirty books on bestsellers lists and every honour and accolade achieved, he could have reigned in his enormous workload or simply taken on less. However, he knew his calling and was keenly aware of the urgent need to bring a voice of decency, goodness and morality to an every increasingly confused world. This he did to the last. His voice was one of consummate Kiddush Hashem. His message all embracing and all inclusive. His calling card was a clarion call to unity, morality, humanity and both personal and collective responsibility. 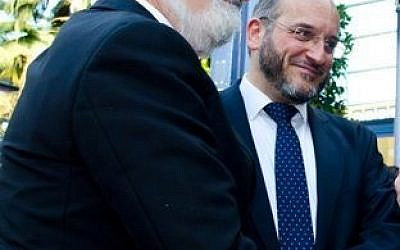 When our communal centre suffered a tragic anti Semitic arson attack some years ago, as Chief Rabbi he was one of the first to visit the charred site. The personal legacy I received from Rabbi Sacks that day is one I have carried with me ever since. As we stepped carefully through the charred debris he turned to me and thundered “Naftali, when they persecuted us in Egypt we knuckled down multiplied and expanded. כאשר יענו אותו כן ירבה וכן יפרץ. Naftali, the quintessentially Jewish response to tragedy is to build bigger, better, stronger than before”

I don’t know if we have the ability alone to be bigger, better or stronger than the giant human being and Jew we have so tragically lost today however, I know that he would tell us that our duty is to never stop trying and that it is not the individual endeavour, rather all about the “Home we build Together”