The Blogs
Reuven Spolter
Founder, The Mishnah Project
Apply for a Blog
Please note that the posts on The Blogs are contributed by third parties. The opinions, facts and any media content in them are presented solely by the authors, and neither The Times of Israel nor its partners assume any responsibility for them. Please contact us in case of abuse. In case of abuse,
Report this post.

The COVID-19 pandemic which crippled Jewish communities around the world raised a number of challenging halachic questions, especially as Jews prepared for Pesach from the confines of self-quarantine. One issue that arose was the question of how and whether one could use newly purchased utensils before ritual immersion (tevillah), which is normally done in a mikveh. Most mikvaot were closed for immersion of utensils, and immersion in a natural body of water proved impractical if not impossible. Was there another way? 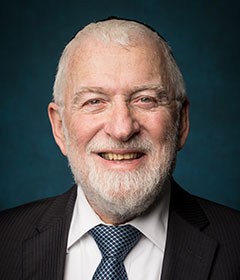 Rabbi Hershel Schacter, Rosh Yeshiva at Yeshiva University, ruled that indeed there was. According to the Shulchan Aruch (Yoreh Deah 120:16), one may transfer legal ownership of his metal and glass utensils to a non-Jew, relieving the owner of the requirement of immersion, at least temporarily. Rabbi Schachter expanded this leniency, and ruled that in the case where one could not physically transfer ownership to a gentile, he or she could even renounce ownership of said utensils via email or social media. (I did not actually see any such posts – but that would have been fascinating!)

What was the basis for Rabbi Schacter’s ruling? It starts with today’s Mishnah Yomit.

The Mishnah suggests a way for the owner of an animal about to give birth to a bechor (first-born, which, if it turns out to be a male, he will have to give to the Kohen) to avoid the “bechor penalty” and keep the animal for himself. If you want to understand how it works, you can learn the Mishnah here. But even more important is the language utilized by the Mishnah.

“Keitzad ma’arimim al ha-bechor” – “How can we act deceptively with regard to the first-born?” (Mishnah Temurah 5:1)  In other words, how can we “trick” the Kohen out of his first-born?

While this language sounds troubling, the Sages were teaching us that sometimes the utilization of legal loopholes is not only acceptable, but necessary. They even called recognized that it looks like trickery, using the term “leha’arim” – “to act deceptively”.

We find examples of legal loopholes throughout Jewish law. The sale of Chametz on Pesach and the sale of the Land of Israel during the Shemittah years are two prime examples. Another Mishnah teaches us that Hillel Hazaken introduced pruzbol as a legal loophole to ensure economic activity during the difficult Sabbatical years.

Rabbi Schachter in his ruling, recognizing the challenge of COVID-19 and the need for creative halachic solutions, followed this longstanding rabbinic tradition explicitly, writing in the Hebrew version of his ruling, “yesh lehatir ha’aramah,” it is appropriate to allow [halachic] trickery.

Rabbi Schachter appreciated the tenuousness of his ruling, noting that once the crisis abates, people should immediately immerse their utensils. But his creativity and willingness to employ legalities in a time of need followed a long tradition of rabbinic creativity, found in the earliest halachic resource we have: our Mishnah.

For more on legal loopholes in Jewish law, see this article in Hebrew written by Rabbi Yisrael Rosen, zt”l, the founder of Machon Tzomet in Israel.

Reuven Spolter is the founder of The Mishnah Project. You can join the Mishnah Yomit program by subscribing on WhatsApp or Telegram

About the Author
Rabbi Reuven Spolter is the Founder of the Mishnah Project which spreads the study of Mishnah around the world. He is also the Director of OTS Amiel Bakehila, a division of the Ohr Torah Stone network, which sends delegations of educators, lecturers and artists from Israel to Jewish communities around the world. Rabbi Spolter also serves as the Shorashim Coordinator for English-speaking countries for Irgun Rabbanei Tzohar. In addition, he teaches Mishnah Yomit, teaching hundreds of students around the world Mishnah via the Internet at www.mishnah.co. Raised in Silver Spring, MD, Reuven Spolter served as the rabbi of the Young Israel of Oak Park in Michigan until his aliyah in 2008. He then served as a Judaic studies instructor and Academic Coordinator of the Elkana Campus of the Orot College of Education from 2008 until 2018. A graduate of Yeshiva University with an MA in Secondary Jewish Education and Rabbinic Ordination from the Rabbi Isaac Elchonon Theological Seminary, he has taught and lectured to groups of all ages in communities around the world. Rabbi Spolter lives with his family in Yad Binyamin, Israel.
Related Topics
Related Posts
Comments