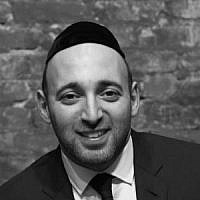 The Blogs
Lawrence Hajioff
Apply for a Blog
Please note that the posts on The Blogs are contributed by third parties. The opinions, facts and any media content in them are presented solely by the authors, and neither The Times of Israel nor its partners assume any responsibility for them. Please contact us in case of abuse. In case of abuse,
Report this post.

“Rabbi, what’s a shofar?” That was the astounding question posed to me by a young Jewish woman who had recently arrived from North Carolina and become my student here in New York City. I don’t know what’s more amazing, the fact that in 2014 we still have young men and women here in the US who don’t know what a shofar is or that such individuals are willing to embrace their heritage and start to learn about the traditions of their ancestors.

She was asking a good question, what is a shofar? We take the horn of a ram, hollow it out, clip of the end and sound it on Rosh Hashanah the start of the Jewish new year. What is the purpose of this sounding of the shofar?

Maimonides attempts an explanation: “Although the blowing of the shofar on Rosh HaShanah is a scriptural decree, there is a hint to why we perform it. It is a means to say awake you sleepers from your sleep and you slumberers from your dozing, inspect your actions, return in repentance, and remember your Creator.” According to Maimonides the shofar acts as an alarm clock or wake up call. The new year is about to begin and we are expected to take stock of our spiritual selves in preparation for the day of judgment.

Being asked what a shofar is, was a true wake up call for me. I began to reflect on how many of our Jewish brothers and sisters here in the US and definitely around the rest of the world don’t know the basic principles of our faith and what can we do about it.

Many nations start their new year with parties, celebrations and some inebriation. The Jewish nation begins our new year very differently. We pray, eat meals with our families and loved ones and seriously think about what personal changes we want to make over the upcoming 365 days. Oh, and we dip an apple in honey and eat it hoping that whatever comes our way is sweet! The idea is as the year begins so shall it continue and we want to start the year right. That means being awake and conscious to what’s about to transpire this coming year.

We’ve all had the feeling of standing on Rosh Hashanah thinking to ourselves “Where has the year gone?” How did we get to another Rosh Hashanah and not achieve what we promised we would last Rosh Hashanah. It’s a terrifying feeling but a good one to have. By focusing our thoughts, prayers and aspirations for the next year will we be able to make sure we will stand next year as 5775 comes to a close and not have that same regretful thought process again, but be filled with gratitude over the blessings we accrued over the past year.

I always wondered why Rosh Hashanah the new year, precedes Yom Kippur if only by ten days. Why do start start the new year with fine food, prayers and excitement and then wait ten days to stand on the day of judgement asking God for forgiveness for what we did the previous year? It should be the other way round! Let’s start with Yom Kippur putting the past year behind us with all its unfortunate mistakes, and then celebrate the new year.

It’s not a novel question but I would like to provide a possible answer. We stand before God on Rosh Hashanah asking Him to give us a sweet new year filled with blessing and success. We then get a grace period of ten days known as the Aseret Yemei Teshuvah (Ten Days of Repentance between Rosh Hashanah and Yom Kippur). God views our behavior during these days as a demonstration of what we really want to be like for the rest of the year. We say we want a sweet new year with many blessings but are we sincere about what is expected of us to make that happen?

These ten days are our way of saying “This is the real me! Ok I messed up a little last year, I’m human, but let me show you how great I can make myself”. Even if we don’t live up to the ideals of these ten days during the rest of the year we at least have a template to return to when we face setbacks and want to get back on track.

Why a Ram’s Horn?

When the Jewish people traveled through the desert it wasn’t uncommon for them to hear the sound of a trumpet calling them to attention. Trumpets are loud and very effective in rallying the masses. Why then do we take an inferior sound maker the horn of a ram and use it to herald the start of the new year?

The talmud answers this question by connecting this mitzvah to a special event in Jewish history: “Rabbi Avahu said: Why do we sound a Shofar taken from a ram? God said, “With a shofar of a ram in order that I should recall the binding of Isaac the son of Abraham and I will thereby consider it as if you had bound yourselves before Me.” By using a horn cut from a ram we are reminded of the time Abraham took his son, his only son through his wife Sarah and bound him to the alter as a sacrifice to God. Why do we need to remember this test of Abraham on Rosh Hashanah? Aren’t there better things to recall as we embark on a new year than what happened to our ancestors 4000 years ago?

Maybe there’s a lesson we can learn from the binding of Isaac on Mount Moriah which can help put us in the right frame of mind as the new year begins. This event was considered the tenth and final test of Abraham. Here was Abraham who was promised by God that he was to become the father of future generations of Jews being told to offer his son as a sacrifice thereby denying him the opportunity of being the vehicle of God’s promise. It just didn’t make sense.

What did Abraham do? Well what Abraham didn’t do is just as telling. He didn’t argue, pray or try to persuade God to change His mind. We know that Abraham was capable of doing that because when God informed him of his plan to destroy the city of Sodom and Gemoroh, Abraham took it upon himself to fervently plead and challenge God about this destruction and its effect on people who would hear about it and question the morality of God’s system of justice. Instead he accepted the word of God with tremendous faith and went forward with this daunting task.

Over the past year we all became very familiar with at least three families in Israel who I believe are our modern day Abraham and Sarah. They each lost a son in the most horrific circumstances yet displayed to us and the world how to accept God’s judgement with faith and stoic courage. Hearing them speak about their experiences should waken us all up to accepting God’s plan for us no matter how challenging that plan may seem.

Another part of the binding of Isaac narrative is quite revealing. The Torah tells us that “Abraham awoke early in the morning and saddled his donkey.” Rashi questions why we need to know what time Abraham woke up that morning. He answers that this demonstrates Abraham’s great love for God and fulfilling His will. Although this was a great challenge for Abraham he didn’t tarry and performed the mitzvah will great willingness.

Abraham’s early rising also demonstrates an incredible insight. If we know Abraham woke up we also know he most definitely went to sleep the night before. How could Abraham sleep through this test? He was about to bring his son as a sacrifice, isn’t that enough cause for a sleepless night! Such was the faith of Abraham. A most difficult task was laid before him but he had the fortitude to accept God’s will with such serenity that he was even able to go to sleep.

By sounding the ram’s horn we recall this test of Abraham and his reaction to it. The upcoming year contains for all of us great potential for success and much sweetness. The year may also have in store challenges that we would never have expected or feel able to overcome. By using Abraham as an example we can have faith that whatever God has planned in 5775 for us as individuals or as a people we can rest assured that it’s all part of God’s plan and we can sleep soundly knowing if we put our trust in God all will come out for the best.

Wishing you all a shana tova and a sweet new year!

About the Author
Rabbi Lawrence Hajioff is on faculty at Yeshiva University, Stern College for Women, and the educational director of the Alumni Community for Birthright Israel in New York. His book Jew Got Questions? will be out this summer.
Comments