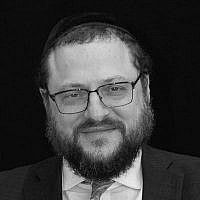 The Blogs
Yehoshua Pinkus
Apply for a Blog
Advertisement
Please note that the posts on The Blogs are contributed by third parties. The opinions, facts and any media content in them are presented solely by the authors, and neither The Times of Israel nor its partners assume any responsibility for them. Please contact us in case of abuse. In case of abuse,
Report this post.

There is a striking irony in Reform Rabbi Eric Yoffie’s preaching to the Orthodox community about how best to educate their young (The Blogs, September 9, 2021) when compared with the results of other public and so-called Jewish educational systems.

But more disturbing than his glaring lack of standing to critique Orthodox yeshivos in New York is his misrepresentation of fact. He seems to have just swallowed whole and regurgitated some baseless claims of Yaffed, an anti-Orthodox group that presents itself as standing up for beleaguered young Hassidic boys who somehow don’t realize that they are beleaguered.

To wit, Yoffie asserts that “New York City yeshivas receive nearly half of their financial support” from state and federal funding sources.

It would please me, a former yeshiva administrator, greatly if, instead of leveling that as a charge, the Reform rabbi were offering a High Holy Days prayer that it be so.

But, according to the most recent New York State data, there are approximately 162,000 K-12 students in Jewish schools in New York State. This includes over 500  yeshivos, day schools, and community schools of all denominations for girls and boys. The estimated budget for all these schools is certainly well over $1.5 billion.

According to Rabbi Yoffie’s assertion, the schools would be receiving well over $750 million dollars annually.

By far, the largest source of nonpublic school funding is the Mandated Service Aid and Comprehensive Attendance Policy programs, which provided Jewish schools $76.5 million in the most recent year for which data has been released. The various “state grants for books” and technology (which, parenthetically, are not grants but rather loans) amount to $13.5 million. Even including the remainder of “federal Title I funding, state grants for books and busing, and city dollars for school guards and child-care vouchers,” the total aid – which is legally and properly offered by the government for the benefit of students – amounts to far less than $300 million.

What’s more, these funds, mandated by state and federal law, are precluded from covering any portion of the actual educational costs – neither Judaic Studies nor General Studies. Rather, they are provided to cover the expense of compliance with state requirements, much of which is above and beyond what the school would otherwise do, and, to a limited extent, provide mandated equitable treatment with public school students for ancillary services.

What is also ignored in the condescending critique is the fact that yeshiva parents themselves pay billions of dollars in state and local educational taxes.

Even more erroneous than Yoffie’s economic errors of fact is his assertion that the Chareidim “as a matter of principle, knowingly and purposefully denies their children a minimum of opportunity to escape their situation.”

As someone presumably somewhat familiar with Talmud, Yoffie likely knows (or should know) that the overriding principal of Jewish education is expressed by the verse “Educate the child according to his way, even when he is older, he will not depart from it” (Proverbs 22:6).

Education is not “one size fits all.” Each community has the responsibility to create an educational system appropriate for that community and their values.  The fact that some yeshiva students have fewer hours of secular instruction than their public-school counterparts does not mean that they are failures. On the contrary, the yeshiva system is, if looked at through a clear, not clouded, lens, stunningly successful.

For starters, Orthodox yeshivos have an enviable record of instilling Jewish values and an appreciation for Jewish continuity, graduating proud Jewish young adults who go on to be productive members of society and mothers and fathers raising committed Jewish families.  Any other religious community would be jealous of the 90% retention and the numerous educational and social service organizations of every stripe that have been founded by and continue to be led and funded by yeshiva graduates.

Besides for imparting core religious values, anyone who spends a few minutes in an Orthodox high school Talmud class cannot but be impressed with the academic rigor and the deep textual and literary analysis practiced This commitment to deep, consistent study, analysis and review, is responsible for the economic success of Orthodox communities.

Thus, every Chareidi community produces productive members of society, not only rabbis and teachers but businessmen, professionals and blue-collar workers.

A stroll through any Chareidi neighborhood, with a glance at numerous stores and businesses, should disabuse anyone of the notion that these neighborhoods are anything less than economically successful, indeed, vibrant hubs of commercial activity.

Is the system perfect? Of course not; no system is. But if one is honestly looking for a system that reinforces the values of the home and produces productive members of society, then the yeshiva system may well be one of the most successful systems there is. And that, at a far lower per-student cost than public schools. Educating the aforementioned 162,000 students in public schools would cost over $4 billion.

Instead of misleadingly deprecating Orthodox educational methods, a Reform leader would do well to objectively analyze the system and see how the lessons could be applied to benefit other educational systems.