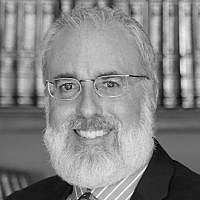 The Blogs
Mark S. Miller
Apply for a Blog
Advertisement
Please note that the posts on The Blogs are contributed by third parties. The opinions, facts and any media content in them are presented solely by the authors, and neither The Times of Israel nor its partners assume any responsibility for them. Please contact us in case of abuse. In case of abuse,
Report this post.

Sitting next to a Chasid on an airplane, our conversation turned to matters of faith and practice. Toward the end of the flight he asked me, in wonderment and exasperation, “Is there any line that cannot be crossed in Reform Judaism?” As a Reform Rabbi, I answered that there were only two left: a Reform Jew could not legitimately believe in Jesus and a Reform Rabbi could not marry a non-Jewish spouse.

But if Hebrew Union College student Daniel Kirzane had his druthers, the one remaining taboo would be acceptance of Jesus as a Reform Jew’s Lord and savior. Kirzane recently wrote that HUC’s policy of not accepting intermarried men and women as rabbinic candidates is “antithetical to our Movement’s essential focus on welcoming and Outreach.” He describes himself as a product of an interfaith marriage and, after all, he turned out all right. He takes HUC to task for excluding where there should be inclusion and of closing doors that should be flung open. He quotes Isaiah speaking on behalf of G-d: “My house shall be called a house of prayer for all peoples.”

This position is the logical and lamentable outcome of Reform Judaism’s embrace of assimilation, of wanting to be everything to everyone, and of exalting the individual at the expense of the community. There are simply no standards, imperatives, or obligations. The adoration of autonomy led first to compromise, then to appeasement, and now to anarchy. For Rabbis to say there is no difference between the marriage of two Jews and a marriage between a Jew and a non-Jew has led to the spectacle of Reform Rabbis officiating at intermarriages with non-Jewish clergy on Shabbat in churches. The response from Reform officialdom, if any, is tepid.

There is no greater threat to Jewish continuity than intermarriage. As Steven M. Cohen and Arnold Eisen conclude in The Jew Within, their study of American Jewry, “Group identity cannot but weaken when Jews increasingly find themselves on both sides of ethnic boundaries.” For all the anecdotal “success” stories, interreligious marriage is not Jewish. Period! As for the wedding, you can stand under a chuppah, wear a large tallis, recite ceremonial texts, drink l’chaims, invite the non-Jew to utter Hebrew words, and break a glass, but the ceremony will remain a charade. The officiating Rabbi can impose conditions, offer counseling, and modify the rituals, but one-hundred Rabbis will not make a non-Jewish union into a Jewish marriage.

One can see that Kirzane knows little about Judaism from his wrenching Isaiah’s pronouncement out of context to suit his eisegesis. The passage may be open to interpretation but it is certainly not a warrant for exogamous marriage. And I wonder how Isaiah would react to Kirzane’s plea. Can we imagine the great Prophet concurring, “Yes, Rabbis who are married to non-Jews present a wonderful role-model! This is in the best interests of the Jewish People! It’s all the same whether a Jew marries another Jew or a Gentile!”

Rabbis married to Catholics, to Muslims, to Jehovah’s Witnesses, to Krishnas – no problem as long as the children are raised “Jewish”! And the meaning of “Jewish” here is usually a program of sporadic and superficial gestures toward Torah and practice. After all, intermarriage usually occurs between people whose faith is not central to their lives, but an afterthought. It is a peripheral concern for two good and nice people who can easily reconcile their respective minimal observances and undemanding beliefs.

Solomon Schechter wrote: “We are anxious to squeeze out of Judaism the last drop of faith and hope, and strive to make it so flexible that we can turn it in every direction which it is our pleasure to follow. But alas! The flexibility has progressed so far as to classify Judaism among the invertebrate species, the lowest order of living things.”

It is the responsibility of Rabbis to be our spiritual leaders. Were Kirzane to emulate his parents, he should not be admitted to a program of study for the rabbinate. The demands of Jewish survival call upon us to condemn, not condone, his decision.

But here’s the good news: at least Kirzane doesn’t believe in Jesus!

About the Author
Rabbi Mark S Miller served as Senior Rabbi of Temple Bat Yahm in Newport Beach, California, for thirty-five years. He is now Rabbi Emeritus of the Reform congregation. He has long supported Israel's right to determine its own destiny, free of interference by Diaspora Jews.
Comments