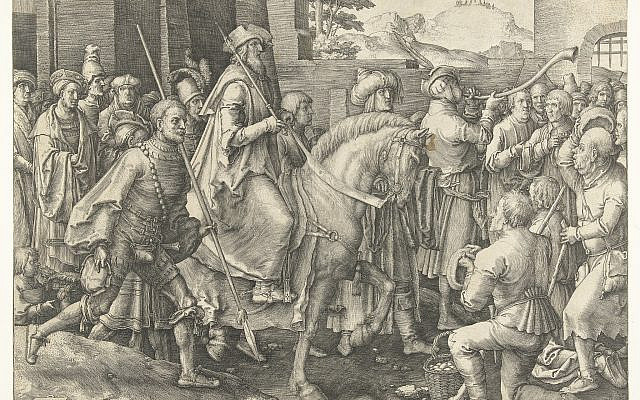 The literary portrait of Joseph, the boy sold into slavery who becomes ruler of his adopted homeland, is echoed twice in the later books of the Bible. Both Mordechai, in the Scroll of Esther and Daniel in his eponymous book have similar stories.

Of the two, Daniel’s story seems to be the closer to Joseph. He too is a young man, a dreamer, an exile in the most powerful kingdom of the time. Through his wisdom and insight he reveals to the king the meaning of a troubling dream. As a result of this and other wondrous deeds he is promoted to high rank in the kingdom.

Mordechai’s story is slightly different. He too is in exile and like Joseph he becomes the king’s chief minister. But he is not young, he dreams no dreams and his achievement is in the sphere of politics not prophesy. And yet the ancient rabbinic commentaries draw a closer parallel with Mordechai than they do with Joseph.

The Midrash points to several verses in Mordechai’s story that echo the Joseph narrative. To the rabbinic mind these echoes are evidence of a common link between the Mordechai and Joseph narratives. By reading them together we can uncover ideas that are not explicit in either narrative alone.

Among the echoes that the Midrash points out are the words ‘day by day’ spoken by the people who entrap both Joseph and Mordechai, the ring that each man receives from the king, the royal garments they each wear and the procession in which they are each led through the streets of the capital city.

The common thread, that these echoes draw to our attention, is that both Joseph and Mordechai were both descendants of Rachel, Jacob’s beloved wife who died tragically young. Joseph was Rachel’s elder son while Mordechai was a descendant of her younger son Benjamin.

The reason why the Midrash wishes to remind us of Joseph and Mordechai’s common ancestry is due to an undercurrent that runs throughout biblical history, ever present but rarely discussed.

It begins with the rivalry between the two sisters Rachel and Leah, Jacob’s wives, and continues as an ongoing struggle for dominance between the tribes descended from them. The struggle starts as the two wives compete with each other for Jacob’s affection. It continues into the next generation Rachel’s son Joseph is thrown into the pit by Leah’s sons and Joseph in turn traps them into tearing Benjamin away from their father. Judah, Leah’s third son but the dominant personality is obliged to negotiate with Joseph to save Benjamin’s life, the irony being that Benjamin, like Joseph, is a Rachelite.

In later Israelite history the Rachelite tribe of Benjamin are ostracised from the nation, only to be redeemed when Saul the Benjamite, Rachel’s descendant, is crowned as Israel’s first king. But the Rachelite dominance does not last. Saul is deposed and David, a descendant of Leah, rules in his place.

When David’s son Solomon dies the kingdom splits in two. The northern kingdom is ruled by Jeroboam, an Ephraimite, descended from Rachel; the southern kingdom remains in the hands of the tribe of Judah, Leah’s progeny.

In the Book of Esther the Rachelite tribes are given an opportunity to dominate once again. Mordechai and Esther are Benjamites, relatives of King Saul. When Esther displays her reluctance to confront the king and tell him of Haman’s genocidal plans, Mordechai warns her that if she doesn’t act salvation will come from elsewhere. He means that this is their tribe’s chance to restore their fortunes; if they do not, someone from the Leahite tribes will undoubtedly step in. Even at moments of national calamity the in-fighting continues.

The Midrash doesn’t tell us any of this. It simply draws parallels between verses in the stories of Joseph and Mordechai, and leaves its audience to work the rest out for themselves. The underlying message is one of conflict and plurality; the nation has always been divided. This can either be a strength or a weakness, but the Midrash is not interested in preaching about unity or division. It simply points its audience at the ideas, and leaves the rest to them.