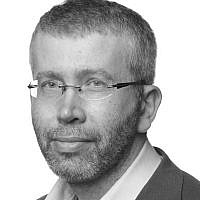 The Blogs
Dan Yanson
Apply for a Blog
Please note that the posts on The Blogs are contributed by third parties. The opinions, facts and any media content in them are presented solely by the authors, and neither The Times of Israel nor its partners assume any responsibility for them. Please contact us in case of abuse. In case of abuse,
Report this post.

As a father of my four offspring, I’d like to share my experience in raising them immersed in English, Russian and Hebrew simultaneously, in the hope that my advice — and mistakes — will help others pursuing the same polyglottal vision of their kids.

Our eldest two kids were young enough when we swapped bonnie yet rainy Scotland for sunny Haifa, with another two who are born and bred Israeli “sabras,” so for the purposes of this “experiment,” all the kids can be considered Israeli-raised. My wife and I converse to each other in Russian, which also serves as the common “family language” spoken at the Sabbath table and other occasions.

The overarching policy my wife and I never deviated from over the years is to speak to all the kids in a single language, “single” meaning a consistent parent-language relationship. My wife assumed responsibility for the Russian, while I took the English, including bedtime stories, homework, home tutoring, and, recently, even baking classes. Only in the company of a non-English-speaking visitor or friend would the kids hear me address them in Russian or Hebrew, and even then, mostly as a lesson in good manners.

The single-language policy starts with self-discipline, as all too often we hear bilingual (mostly Russian) parents switching from Russian to Hebrew mid-sentence, or vice-versa, or throwing in a good measure of Hebrew words in their otherwise Russian sentences. As a result, their kids are deprived of hearing a clear standard for their second language (be it Russian or English) and tend to slip into Hebrew entirely, as their kindergarten or school environment becomes increasingly dominant. So it all starts with the parents not compromising their own speech; it does take much perseverance to stubbornly keep calling Monday “Monday,” with everyone around you referring to it as Yom Sheini.

As my 9-year-old daughter informs me, “Dad, you know, we have a peyeelut on Yom Sheini, and I need to bring a new klasser to my kitah,” I assume a puzzled look and pretend to be genuinely intrigued: “Wow, that sounds amazing! But I wish I knew what peyeelut was. Can you describe to me what it means?” I guide her along in her search for a suitable translation with English synonyms until we arrive at the definition of “activity.” Ditto for klasser (folder) and kitah (class), which she recalls all by herself. The funny thing is, all along, both she and I had known the words she was struggling to define, and all she needed was some prodding to invoke them in the right context and encouragement in finding English counterparts to the bits of information she had received in Hebrew. To finish it off, I repeat the original question in proper English and make her do the same, whereupon we discuss the details of her class activity and the other items she needs to bring along.

When asked what language our kids use for thinking, our answer is that it depends on what they are thinking about. In multilingualism, the kids acquire information and relevant terminology about different fields in different languages. At home, this is particularly evident in the different “territories” covered by my wife and me. With the kitchen decidedly being a mother-centered, Russian-dominant domain, I can only retort to my son’s, “Dad, we left some makarony for you in the green kastroolka” with a Roger-that message, “Got it, there is some pasta for me in the green pot.”

At school, the stuff learned in Hebrew would normally remain locked in that language, with the child struggling to explain or render it in English or Russian. We therefore encourage the kids to translate their divrei Torah (Torah insights) from school at the Sabbath table, prompting them and suggesting wordings for the ideas they are trying to put across. I also review their homework in Math, Sciences, History, etc., to show them how the same subject matter is expressed in English, with some reinforcement from YouTube clips, Khan Academy, and other websites. As a result, alongside doing Math in Hebrew, the kids are also comfortable with counting in English (including the times tables!), which they readily exploit as they inquire, in the middle of doing their homework, of our Amazon-powered voice assistant, “Alexa, how much is 25,444 minus 333?” Just as easily, they can find the population of Italy for a geography project, or the year Napoleon invaded Russia for a history one.

Now looking back at our elder kids, with all the trials and tribulations persisting through much of primary (elementary) school, not only have they essentially closed the remaining gaps with their monolingual peers, but also started to reap the benefits of easier access to information and a deeper appreciation of culture, history and geography, among other subjects in high school. Their abilities to clothe ideas with eloquence in different languages and translate them on the fly are beyond amazing. Their extra-curricular activities include violin and piano lessons, taken in Russian from high-caliber Soviet-educated musicians.

In English classes, our kids are in a different league and serve as walking dictionaries and homework solvers for their monolingual classmates. It became quite evident from the start that regular English classes were inadequate for our kids, and try as I might, I could not work out a suitable arrangement to progress our kids at school. While there are schools in Israel that run special classes for students from English-speaking families, the schools our kids went to had no solution to offer.  Even as we furnished our kids with UK-sourced textbooks, the teachers would not be able to give or supervise special assignments in class, and our kids would get distracted with what everyone else was doing. The best the teachers could do was to engage them in a meaningful way with the rest of the class, but not really challenge them with anything new. At the same time, I had heard stories of other Anglo kids having too easy a ride through English classes in their early years at school, only to realize they were lagging behind their Israeli peers in spelling and writing skills when they had to produce essays and book reports in high school. So for us, English became very much a home-school subject.

It turned out that English-as-a-Second-Language (ESOL) techniques prevalent in Israel are inappropriate for kids from an English-speaking home, so we have been using private English tutors who had experience teaching English as a first language back in the UK. With an improvised curriculum based on England’s Key Stage system, the kids have been progressing nicely in all areas of language proficiency.

With variable success, we also tried to get each kid of ours hooked on writing, by subscribing them to online learning tools like nightzookeeper.com and encouraging them to learn touch-typing at typingclub.com, which, incidentally, also features spelling and vocabulary courses at typingclub.com/sportal/catalog.html. Also, incidentally, only in Israel can you buy trilingual PC keyboards, testifying to the relevance of Hebrew, English and Russian in this “melting pot” of a country.

So the bottom line is, multilingualism is anything but automatic and requires a considerable investment of time and money to help your child achieve both fluency and literacy in each language, in as many fields of knowledge as possible. As parents, you can provide consistency and structure by sticking to a “mother tongue” and a “father tongue.” Starting with bedtime stories, try to expand the “territory” covered by your language, discussing different subjects and ideas. Do invest in books and Kindles to get your kids started on reading, using the easiest of texts and as early as they can read a sentence.

Yet the language of the country, Hebrew, is the most important one for your child to master, so do enlist external assistance and educational resources to enable your child to excel at school and to keep up with their peers outside the home. With several kids in the family, chances are they will eventually speak Hebrew among themselves (although ours often switch between the languages, depending on who is talking to whom, and about what), so be open about their choices and don’t stop them from using one language over another – unless they are speaking to you.

Then, in high school and beyond, I hope you are blessed to see your effort and perseverance come to fruition, as your kids demonstrate higher academic achievement, better reasoning, problem-solving skills, and creativity.

About the Author
Dr. Dan Yanson is a laser physicist and entrepreneur, whose engagements include photonics, artificial intelligence, and autonomous vehicles. Having switched two countries, Russia and Scotland, prior to settling in Israel in 2008, Dan works for a major defense contractor. He also acts as a technical expert for the European Commission in Brussels. In his entrepreneurial stint, Dan founded computer-vision venture TheWhollySee, which won Nvidia’s $100k award as Israel’s best AI start-up in 2018. Dan is also a founding member of the Toldot Yitzhak community that serves as an umbrella organization for religious Russian-speaking immigrants in Haifa.
Related Topics
Related Posts
Comments