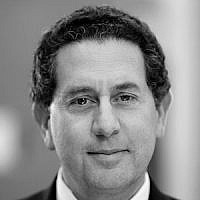 The Blogs
Richard S. Hirschhaut
Apply for a Blog
Advertisement
Please note that the posts on The Blogs are contributed by third parties. The opinions, facts and any media content in them are presented solely by the authors, and neither The Times of Israel nor its partners assume any responsibility for them. Please contact us in case of abuse. In case of abuse,
Report this post.

This year brings not one, but two major milestones in Israel. Along with Israel’s 70th anniversary, we will be marking Rambam Medical Center’s 80th year later this month. That is double cause for celebration.

We have come a long way from 1938 when the British Mandate forces, preparing for war in Europe, built a new hospital around a former convent building on the shores of Haifa Bay. The 225-bed hospital, designed by noted Bauhaus architect Erich Mendelsohn, was planned to be “the finest medical institution in the Middle East.” In our view, it certainly has lived up to that billing.

From the moment it was transferred to Israeli hands in 1948, Rambam met the challenges of war, immigrant absorption, disease, and rapid population growth. The staff was comprised of new immigrants and many refugees from Europe, some of them survivors of the Nazi death camps, who teamed up with Israeli-born doctors and health care providers to build the new hospital.

From its humble origins, Rambam has grown to become one of Israel’s leading medical complexes, a 1,000-bed hospital and the major referral hub for all of Israel’s northern hospitals. In a country where there are no military hospitals, Rambam is the major treatment center for wounded soldiers and casualties of war in the North. That role was underscored in 2006 when missiles shelled Rambam during the Second Lebanon War. As a result, and with an “only in Israel” resolve, Rambam set out to build the remarkable Sammy Ofer Fortified Underground Emergency Hospital, essentially a parking garage that within 48 hours can be transformed into a 2,000-bed fully functioning facility with surgical stations and support systems.

Rambam has become a mosaic of Israeli society. On the campus you will find Jews and Arabs, Christians, Druze and Muslims, religious and secular. We are proud that the head of our Trauma and Emergency Department is an Israeli Arab, no big deal at Rambam, where Arab doctors work alongside their Jewish counterparts at every level. We are delighted to see Haredi and Muslim children playing together at the Ruth Rappaport Children’s Hospital. And we take for granted the repeated ‘miracles’ of Rambam, life-saving surgery and technological innovations brought to the bedside of a doctor who takes time to know his patient.

Since its founding, Rambam has become world-renowned for its advances in research, clinical medicine and innovation in health care. Under the visionary leadership of its Director General, Prof. Rafi Beyar, Rambam is highly-regarded for its patient-centered care, while bringing the finest talent in medicine to assume positions of leadership at the hospital. During Rafi Beyar’s tenure, Rambam has grown to include several prominent institutes on its growing campus: The Joseph Fishman Oncology Center, the Eyal Ofer Heart Hospital, and most recently, the Helmsley Health Discovery Tower, where science, innovation and clinical medicine will converge for the transformation of healthcare in Israel and for the benefit of humanity.

Rambam represents the finest in Israeli and global medicine and health. Moreover, the spirit and humanitarian values of our namesake, the medieval philosopher-healer Maimonides, the Rambam, has guided the hospital through its first eight decades and surely will inspire our continued progress in the years to come.

The writer is National Executive Director of the American Friends of Rambam Medical Center.

About the Author
Rick Hirschhaut has served as a Jewish communal professional for over three decades. He has held senior leadership positions with the Anti-Defamation League, Illinois Holocaust Museum and Education Center, American Jewish Joint Distribution Committee, and American Friends of Rambam Medical Center. He is also an Emmy Award winning co-producer of the nationally broadcast documentary, Skokie: Invaded but Not Conquered.
Comments