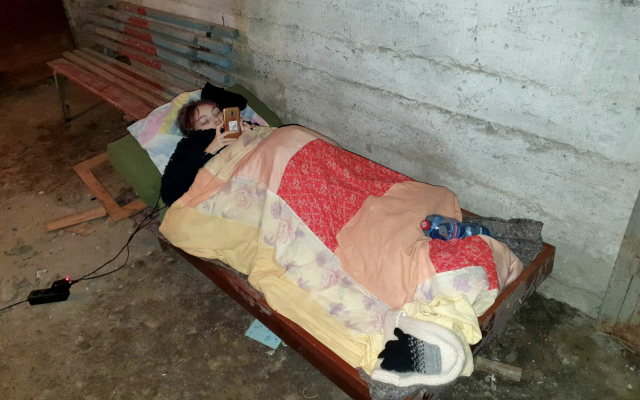 Yuliya Matyushenko, a 19-year-old with SMA type 2, reads news on her cellphone while resting in a makeshift underground shelter as her city, Kharkiv, is bombed by Russian forces. (Vitaliy Matyushenko)

When Yuliya Matyushenko was 12 years old, the Paris-based nonprofit organization Eurordis featured her on a poster promoting Rare Disease Day 2015.

“Our entire building is vibrating from the explosions,” her father, Vitaliy Matyushenko, texted me last night via WhatsApp from Kharkiv, scene of some of the fiercest fighting since Russian President Vladimir Putin attacked Ukraine on Feb. 24—launching Europe’s most devastating land war in generations.

Yuliya is one of an estimated two million Ukrainians with rare diseases ranging from cystic fibrosis to pulmonary hypertension who are now trapped by bitter street battles across this country of 44 million, which was already Europe’s poorest even before current hostilities broke out.

“It’s been three days since this war started, and we’re living mostly in the basement,” said Vitaliy, a physicist who established the nonprofit CSMA Foundation in 2004 along with his mathematician wife, Svitlana, after their daughter’s diagnosis. “During these days, the attacks are coming closer and closer to us. Hospitals, civilian buildings, schools, even the zoo are targets as well as military facilities.”

Meanwhile, Yuliya has only one week’s supply left of risdiplam (Evrysdi®), a liquid taken once a day by mouth or feeding tube, and obtained through the compassionate use program of Swiss pharmaceutical giant Roche.

Before the war, many of Ukraine’s 300 to 400 SMA patients were being treated with Biogen’s nusinersen (Spinraza®), but the few hospitals in Kyiv that offered the infusions have since shut down, and transportation between cities is nearly impossible.

“She wants to return to her lessons in the university,” Vitaliy said of his daughter. “For now, she’s just scrolling news on her phone, educating herself on politics and current events.”

A hotline for rare disease patients who need help

In Lviv, near the Polish border in extreme western Ukraine, Karina Pietoian and Yuriy Galyulko watch carefully over their 7-year-old son, Eldar, who has Duchenne muscular dystrophy (DMD). Along with their 2-year-old daughter Margarita, they live on the third floor of a 19th-century brick building in the center of this medieval provincial capital.

“Parents are fleeing abroad. Some are forced to leave their homes, and others courageously remain. Men help to transport their women and children across the border, and to return and fight,” Pietoian said in a text. “Eldar is ready to go with his father to defend our Ukraine, but for now he’s at home with his sister, helping me collect things for refugees from the east.” 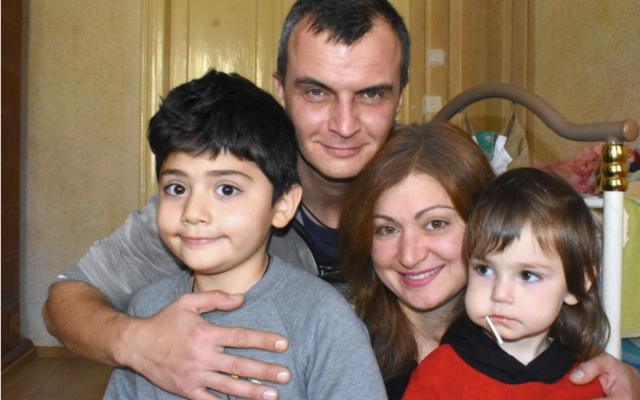 Yuriy Galyulko and Karina Pietoian pose with their 7-year-old son, Eldar, who has Duchenne muscular dystrophy, and their healthy 2-year-old daughter, Margarita, at their home in Lviv, Ukraine. (Photo by Larry Luxner)

As of 2018, Duchenne Ukraine had 444 patients in its registry, though the actual number of people with DMD is believed to exceed 500—and may in fact be closer to 600. Lviv alone is home to 91 Duchenne boys including Eldar, who is still able to walk on his own.

“A tragedy is unfolding before our eyes, a tragedy that disproportionately affects people living with rare diseases,” Rucinski told me. “It’s not only personal safety that’s in jeopardy. People can no longer rely on electricity, heating, water and access to therapies. Bomb shelters in Ukraine are not wheelchair-accessible, nor are backup generators installed there.”

Rucinski said he’s been in contact with dozens of families whose children have SMA, yet the needs are overwhelming.

“These wheelchair-dependent children are spending days and nights in cellars, in winter cold, with no access to daylight, among the sound of explosions,” he said. “I can’t imagine the toll the war will have on them—physically, emotionally and psychologically.”

At the same time, he said, “we also see examples of utmost bravery and dedication. A father of another child with SMA, who lives in Kharkiv, by night drives other SMA families in his minibus hundreds of kilometers to safety. SMA parents help each other with everything just to survive.”

He added: “We have also received offers of help from our sister organizations across Europe. We’re united not only by the same mutated gene, but primarily by humanity.”

On Feb. 24, Eurordis issued a statement of solidarity with the Ukrainian people, noting that “the wartime destruction of vital infrastructure such as hospitals and care centers, threatens the lives of this vulnerable population. As the situation escalates rapidly, we need to avoid a potential humanitarian crisis and ensure that people living with a rare disease—whose conditions re often debilitating or need frequent medical attention—are not left behind.” 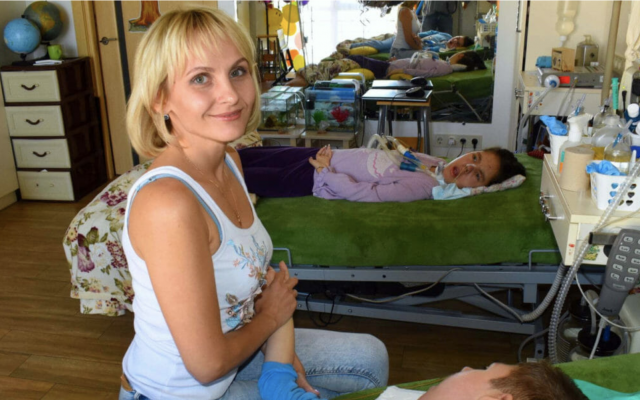 Nataliya Radysh of Lviv, Ukraine, cares for her two children, Sofijka, 13, and Lukyan, 11, both of whom have SMA type 1. (Photo by Larry Luxner)

Yet the World Health Organization warned only three days later that Ukraine’s supply of medical oxygen is running dangerously low. In its statement, the Geneva-based agency said “trucks are unable to transport oxygen supplies from plants to hospitals across the country, including the capital, Kyiv. The majority of hospitals could exhaust their oxygen reserves within the next 24 hours. Some have already run out. This puts thousands of lives at risk.”

Nataliya Radysh shares a ninth-floor apartment in Lviv with her 13-year-old daughter, Sofijka, and 11-year-old son, Lukyan. Both children have type 1 SMA and are confined to wheelchairs; neither can hold their heads up or sit on their own. The bedroom they share looks like a hospital intensive-care unit, with ventilators, pulse oximeters, inhalers, suction devices and plastic tubes.

Even though Lviv is far from the main battle zones, air-raid sirens have been going off four or five times a day, she said in a text message. 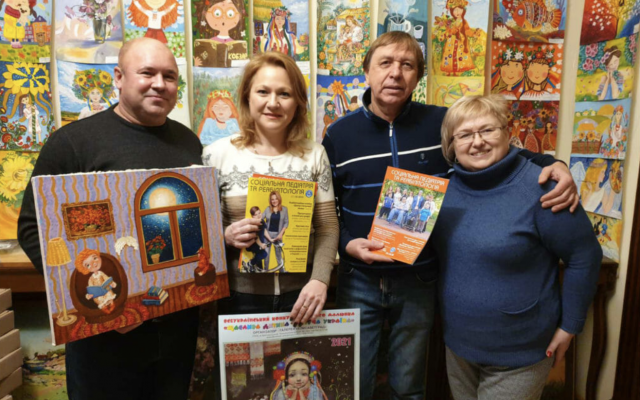 “I’m scared not for myself but scared for my children. What shall I do? Go or stay at home? Both are dangerous. Broken windows and injuries from explosions are possible. After all, I can’t transport them to bomb shelters or basements,” Radysh said. “I have to stock up on gasoline for the generator in case the power goes out. Our medical apparatus cannot work without electricity for more than five hours. Then what? I have no idea how to pack everything we need in one car. And the children have difficulty on the road; they’ve never traveled anywhere for more than two hours.”

Meanwhile, Margarita Yashchenko and her husband Serhyi are trapped at home in the central Ukrainian city of Kropyvnytskyi along with their son Danya, 14, who was diagnosed with Duchenne at age 6 and has since gotten progressively worse.

“Many families with disabled children are moving to the central part of the country as well as the west. But there are lots of families with kids who can’t leave and have stayed in their houses. Every hour the situation is changing, and we are all in danger,” said Yashchenko.

“Children with Duchenne are at a big risk because they’re in wheelchairs and are unable to move quickly downstairs to safe places,” she said, adding: “We do not even know where the safe places from Russian missiles, but we are going to protect Ukraine, because it is our country.”