The Blogs
Joshua Hammerman
Rabbi, award winning journalist, author of "Embracing Auschwitz" and "Mensch-Marks: Life Lessons of a Human Rabbi"
Apply for a Blog
Please note that the posts on The Blogs are contributed by third parties. The opinions, facts and any media content in them are presented solely by the authors, and neither The Times of Israel nor its partners assume any responsibility for them. Please contact us in case of abuse. In case of abuse,
Report this post.
Every menorah tells a story.  That’s why it’s my favorite Jewish ritual object, bar none.  You can decorate a Sukkah to perfection, find a lovely ceramic seder plate or ornamented kiddush cup, and each shofar carries with it the mystery of a thousand bleats.  But a menorah can express your personal tastes and beliefs in myriad ways, while at the same time amplifying a call that resonates though the ages: “Not by might, not by power, but by My spirit, says the Lord of hosts.”
This year, we get to see menorahs in their natural habitat — on bookshelves and countertops in the inner sancta of people’s homes.  During the pandemic, we’ve gotten to see the insides of more homes than Elijah the Prophet.
A Twitter account, Room Rater, was created to evaluate the trendiness of celebrities’ Zoom and Skype backgrounds, their books, floral displays, framed art and, lots of plaques and trophies.  But sometimes there is a menorah, and every menorah tells a story.
You can learn a lot about a person by the candelabra they keep.
Last night I was watching an interview featuring Josh Shapiro, the attorney general of Pennsylvania, who has been very visible lately (for reasons too abhorrent to discuss here).  I took this screen grab from my TV. 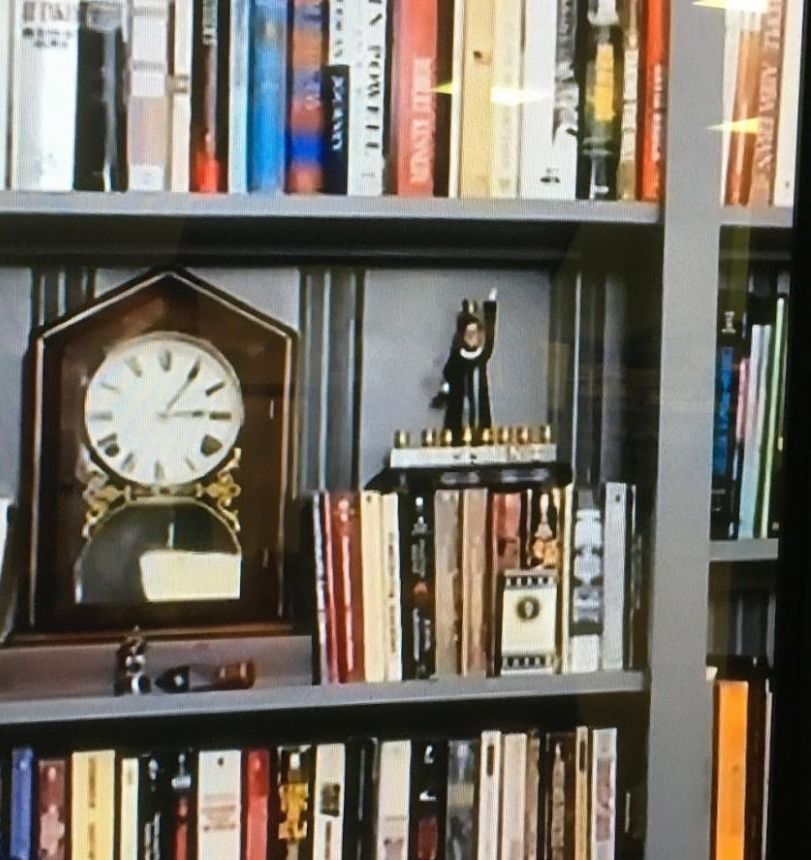 Yes, it’s a Ruth Bader Ginsburg Hanukkah menorah.  What a perfect tribute to the woman who embodied the spirit of this holiday, and who is so missed right now.  Room Rater would surely have given it a perfect score, even if the clock next to Ruth seems to be about 6 hours off.
Inspired by this, I checked out some of the Menorahs of Twitter.  Here’s one for dog lovers. 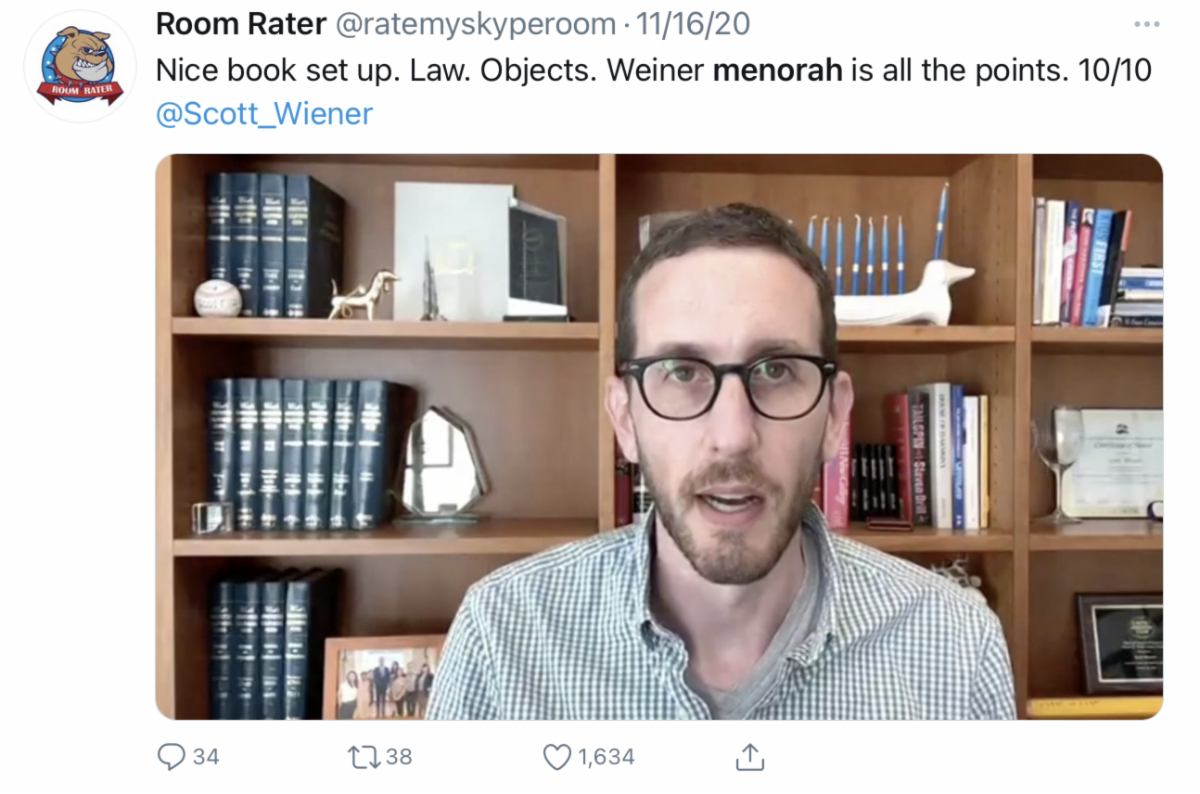 As As I said, every menorah tells a story.  So here’s mine.
The Hanukkah menorah that my wife Mara and I have used since 1981, the year we were married, has journeyed with our family across the globe.
We purchased the menorah from a small art gallery in the Old City’s Jewish quarter. ‘Twas the day before Hanukkah and we needed something to light that night. We passed by all the typical ones, the traditional brass, the modernistic glass, the Zionist replicas of the Menorah outside the Knesset.
None of the menorahs we saw were what we were looking for. Until we came across this shop and immediately, we both knew – this was the one for us. 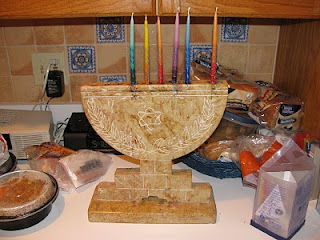 Why did we love it so much?
– It’s made of Jerusalem stone. This of course made it a pain-in-the-Knesset to move around (and my mother in law was the one who schlepped it home for us in her carry-on – which has in itself become a family legend over the years). But wherever we lived, we felt we would be carrying a piece of Jerusalem with us. Literally! We owned a piece of the rock.
– The stone is carved out in a grid pattern, reminiscent of the Western Wall. But this is no kitschy Kotel scene that you will find in trinket stores. This was a one of a kind, gently carved slab of marble, which may, who knows, have been part of the temple itself once upon a time.
One of the more remarkable things about Jerusalem is that when the Romans destroyed the temple, the debris was too heavy to be moved very far. Much was simply tossed into the valley beneath. Entire pillars found their way into the upper city, which is now the Jewish quarter. I saw a bunch of kids creatively use one as a soccer goal.
Any random pebble in that area could well have come from the holy of holies. Every stone is holy. And each one tells a story. As the popular Israeli song about the Kotel states: Some people have hearts of stone; some stones have the heart of people. These stones cry. When wax drips down, it looks like the menorah itself is crying human tears.
– The menorah is not perfect. It slopes a little and the the little holes for the candles (or oil dispenser, which we used at first), are not symmetrically aligned.
– The Jewish star and olive branches speak less of Maccabean militarism than of the miraculous enduring hope that lights up our darkest moments – a hope that represents the most eternal victory of our indestructible people.
– This menorah, deeply rooted in our holy city, like us, has also accompanied us on our family’s journey. As our lifelong companion (and in many ways, our first child, even predating Maggie, the dog), it faithfully waits all year on the floor of our upstairs closet for me to lift it (with a more audible “oy” each year) and carry it downstairs, where it awaits its first glance at us and my family. And this menorah has seen them grow, year by year.
Until this year. This year the menorah will not be able to look upon our whole family, as the virus has made that impossible.  But in a world where everything changes, this slab of Jerusalem has become, quite literally, our rock, one the few constants in a crazy world.
How fitting that we chose this simple, earth toned, unbalanced shining half-moon with which to share the light of our miracles with the world.

It lights up any room it enters.  That, in my book, rates it a clear ten.