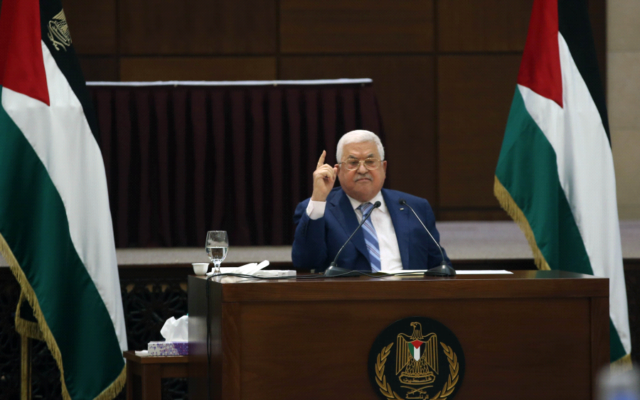 There are those on the Israeli left who sneer at the peace and normalization deals signed this week with the United Arab Emirates and Bahrain.

Though strategically the left is usually the side in Israel which thinks rationally, this attitude towards the Abraham Accords is an exception, and it’s unwise.

Some of it stems from a deploring of both Donald Trump and Benjamin Netanyahu, and the fear that their success might help them politically. But on a deeper level, there is concern that the Accords might diminish the chances of a two-state solution that separates Israel from the Palestinians.

Such a solution would constitute both long-delayed justice for the Palestinians and demographic salvation for Israel. The logic, which is simple but exceeds the mental capabilities of the Israeli right wing, is that without it Israel in effect absorbs so many  Palestinians that under any plausible scenario it could no longer be called Jewish and democratic, or either.

Elements in the Israeli left have long calculated that it was important for the world to punish Israel until it agreed to save itself through partition. The Arab world’s role was to deny Israel normalization until it did the right thing – which at this writing it has not yet done.

There are a number of problems with this.

First, wishing ill upon one’s own country might enable the right wing spin machine – which unlike its policy machine is clever – to portray one as unpatriotic. Indeed, the right has succeeded in making “left” a four-letter word in Israel. This does not enhance the left’s efforts to return to power, which is probably a precondition for partition.

Second, it didn’t work. Humanity, especially in the 21st century, has become a surly and mulish bunch. Rare is the person who can be persuaded. The Arab Peace Initiative has been on the table since 2002, promising the moon if only Israel went along, and no Israeli government has even bothered to respond, let alone negotiate. Generalizations should be approached with caution, but it’s safe to say Israelis don’t respond well to blackmail.

Third, and most importantly, there is reason to hope that rather than killing the two-state idea, this week’s developments may help nudge it back onto the stage.

Of course, Israeli analysts in recent days have competed to outdo each other with cynical assessments that dismiss the Emirati and Bahraini protestations that they remain committed to furthering the two-state solution. Indeed, they managed to stop Israel’s West Bank annexation foolishness in its tracks. But journalists love cynicism; credulous listeners, and these are quite a few, can mistake it for wisdom.

For the lefties among the journalists, this skeptical position is accompanied by regret. The rightists betray a triumphalism of the sort that repeated electoral successes have allowed them to perfect.

Both are wrong in my view, for the following reasons.

First, the Palestinians, whose leaders are shocked and dismayed and accuse the Gulf states of betrayal: they would do better to reflect.

The Palestinians have been demanding Arab support for their positions for many decades, and have embroiled the Arab world in continued and pointless hostility with what is in many ways the most developed nation in the region.

In recent times, under Ehud Barak in 2000-2001 and Ehud Olmert in 2008, the Palestinians twice failed to capitalize on offers of a (demilitarized) state on almost all the land they seek – in the neighborhood of 95 percent, with land swaps to cover much of the rest.

Incredibly, Olmert even offered far-reaching concessions in Jerusalem, which were about as far as we can ever expect anyone to go down the extremely rare path of dividing a city between two entities with a history of conflict. He was also willing to remove tens of thousands of Jewish settlers idiotically implanted into the West Bank, many of them on plainly usurped private Palestinian land.

Israel’s offers were not perfect, but despite a narrative to the contrary they were real, and its security concerns are justified: the West Bank is extremely strategic territory, and there is a massive cautionary tale in Gaza, ruled by a terrorist mob since 2007.

The Palestinians have been clinging to maximalist positions on borders, Jerusalem and refugees. The latter is especially implausible, proposing that the millions of descendants of 600,000 people who were expelled 72 years ago, most to nearby similar terrain and cultures, are “refugees” who must “return.” Despite winks and nods and ambiguous assurances, the Palestinian leadership still encourages its public’s opinion to doggedly cling to this dream.

Great grandchildren of the Sudeten Germans do not roam about clutching the keys to homes long gone; Pakistanis do not spend epochs yearning for a return to today’s India. The Palestinians deserve freedom from Israel and an independent state and should be generously compensated, but they also need to grow up about this.

Some say Palestinian steadfastness is the bargaining chip of the weaker side, but I think not. It is a pathology that has made them be cavalier about peace offers that most other players on the world stage would have engaged, and even grabbed. In defending this stunning foolishness Palestinian leaders offer lame excuses involving doubts that Olmert, who was under police investigation, could deliver what he offered. We saw this week what an actual criminal defendant can deliver, when the motivation is there.

It is inelegant to presume and demand favors from others, and act as if they owe you something. It is behavior that these others will eventually find irksome and cease altogether to indulge.

The Palestinian leadership has long assumed the Arab world will put up with their shenanigans and support the victim narrative they have unhelpfully instilled in their unlucky flock. If they are feeling abandoned today, some good will come of it if they’re inspired to reassess.

Specifically, Abbas might declare that if the Olmert offer were on the table once again it would be a basis for an end-of-conflict agreement. That would be an excellent way to challenge Netanyahu in his amusing new posture as a man of peace.

As for the Israelis: genuine peace and deep normalization of the kind that seem on offer should bring all sides material benefits and other rich rewards. That might encourage a dynamic that forces them to take more seriously the Arab world’s desires.

It is one thing to be denied a thing never experienced; one might continue to act like an idiot. It is quite another to risk losing the fruit you have finally tasted and enjoyed. There is no guarantee, but such leverage might moderate even the clueless Israeli right.

There is rarely much upside to pessimism, and in this case there is none. Cheer for the good news; argue about politics some other day.