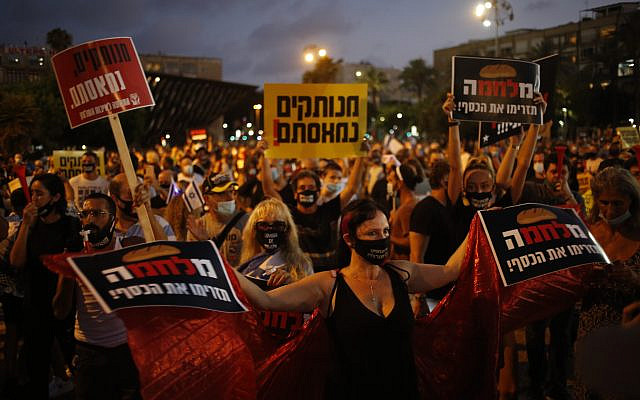 Israel entered the coronavirus era amid unprecedented social and political turmoil. Nearly five months into the COVID-19-induced crisis, it is on the brink of collapse. Far from replicating its initial successes in battling the pandemic, it is witnessing escalating rates of proliferation. The economy has already shrunk by over seven percent, unemployment is skyrocketing and no relief is in sight. Many citizens are traumatized, with official actions often intensifying already deep-seated anxieties. As uncertainty grows, chaos is spreading exponentially. Confidence in government has plummeted dramatically, barely scratching 30% today. What started as a severe health challenge which quickly morphed into an economic and political one, has now become a comprehensive crisis of trust, which requires equally encompassing solutions. What is needed is a fundamental recalibration of the relationship between citizens and decision-makers to begin the lengthy process of rehabilitation now and to enable steady reconstruction in the years ahead.

The new brand of instability in Israel is a product of a dynamic of growing distancing between a progressively maladroit government and an increasingly dissatisfied citizenry. This cycle began with the appearance of the first signs of the coronavirus pandemic in February, at the height of the third election campaign within a year, during a period when the transition government headed by Benjamin Netanyahu was not subject to any parliamentary oversight and when emergency measures — including a rapid and complete lockdown — could be implemented unimpeded. The inconclusive outcome of the elections facilitated the centralization of power in the hands of a transitional prime minister who, while assuming a top-down approach to handling the outbreak, also took advantage of his daily appearances in the media to divert attention from his impending corruption trial and to manipulate political currents to enable his continuity in office.

The end of the first wave of the pandemic in May coincided with the establishment of an over-bloated, duopolistic, government that was quick to announce its success — largely due to a cooperative public — in restraining the virus, but slow to take advantage of the hiatus to either prepare for its recurrence or to treat its pernicious economic and social byproducts. The reopening of schools and workplaces could not hide murmurs of discontent from below. Close to one-fifth of the workforce had either lost their jobs or were on extended furlough. Small businesses began to crash. Long-standing inequalities became even more acute. Inevitably, demands for greater socioeconomic relief accelerated.

The government response has been excruciatingly slow in coming. Much of June was taken up with debates over possible annexation and ongoing diatribes against the media and the judiciary. As economic policy stuttered, COVID-19 began to rear its ugly head again — facilitated by a monumental lack of forethought and increasingly erratic management. To make matters worse, legislation has now been introduced to further emasculate the Knesset, to sanction digital surveillance of citizens and to grant the government extraordinary powers. Official complaints against those responsible for navigating the medical emergency have been compounded by further attacks against the bureaucracy and even the public at large — sprinkled with traditional denunciations of the left and, progressively, against critics from within (not only Gideon Saar, but also Yifat Shasha-Biton). Already embedded authoritarian tendencies have consequently been reinforced, even as policy initiatives have sown confusion bordering on anarchy.

Societal reactions have taken on a variety of forms. Many Israelis are focused on managing their daily existence, trying to avert exposure to the pandemic while coping with rising economic distress. Organized groups — entrepreneurs, teachers, the academic community, the entertainment industry, tourist guides, hoteliers and restaurateurs — have applied pressure on decision-makers. Over-stressed and underpaid medical personnel and social workers, at wits’ end, are striking. These economic protests — coupled with long-standing demonstrations protesting anti-democratic policies and corruption (often pointedly aimed at ousting Netanyahu) have spread just as the quickly as the second round of the coronavirus.

This past week, the resistance from below reached a boiling point. As the polls showed a magnum reduction in the popularity of the prime minister and his government and as the coalition conjured up increasingly questionable palliatives, the stage was set for the rupture of state-society relations. No longer able to bear governmental unpredictability or to make ends meet, anger has replaced fear, as more have moved from expressing disappointment — dispersing black humor on the social networks, writing heartrending posts, or signing petitions — to wholesale expressions of civil disaffection.

The economic, personal, and political sources of discontent have blurred, yielding a broader resistance to the many different aspects of the current quagmire. This uprising does not conform to traditional left-right or sociological divides. It is coming together in a new cri de coeur that simultaneously demands predictability and something different than the divisive sectarianism of yesteryear. Ongoing protests have become more violent — as have the measures used to restrain their multi-generational participants. Israel, as a result, like many other stumbling democracies, is caught between the authoritarian propensities of its rulers and the anarchy that their inadequate responses have generated.

Any effort to deal with this widening chasm must aim at restoring trust by reasserting the fundamental democratic principles of transparency, accountability, pluralism and mutual tolerance. This implies that a strategy for immediate stabilization and longer-term rehabilitation requires reform not only at the governmental level, but also in the interaction between the state and the country’s diverse civil society.

The institutions of government and their interrelationship require immediate attention. The present imbalance between the executive and the legislature should be rectified without delay — in direct contradiction to the ongoing effort to subordinate the Knesset to the whims of the governing coalition. Thus, for example, the pushback by the Knesset’s Corona Committee, instead of being vilified, should be supported and even expanded — just as the incessant assaults on the independence of the judiciary must stop. This would create a healthier balance between the various branches of government and enhance constructive engagement in public affairs.

The present administrative confusion — very much expedited by the ambiguous division of responsibilities among numerous authorities and newly-invented ministries and by the consequent problems of governance — cries out for clarification and streamlining. The ongoing debate over who is responsible for the planning and implementation of COVID-19 policy is a case in point: one “coronavirus czar” may be given ultimate authority in this domain, but overall design, designation of firm criteria for movement between phases, data-gathering, testing, epidemiological tracking, closure enforcement, as well as the accurate dissemination of information, must be delegated to specialized units. Similarly, the incessant squabbling between various ministries should give way to greater coordination — admittedly no simple task in the current environment of multiple personal and political rivalries.

The rules guiding government action must also be revamped. In the absence of a constitution, it is high time that the basic laws — which carry constitutional weight — must be protected. Their entrenchment will prevent their constant alteration to suit the needs of particular ruling coalitions, establish the parameters of acceptable conduct and guarantee limitations on those in power.

These are serious and often challenging reforms at the apex of the political system. Yet alone they are meaningless if they do not harness the immense possibilities inherent in civil society. Indeed, much of the survival capacity of Israel’s heterogeneous population during the pandemic is attributable to the amazing volunteerism of many individuals and to their numerous communal efforts. Even though individuals have flouted restrictions and ducked uncomfortable decrees — directly contributing to their own immiseration — many non-governmental organizations have increased their efforts to support the needy, the elderly, the disadvantaged and the disabled, providing services no government agency has been able to offer. Reinforcing this spirit of mutual aid across various sectors and locations is essential in current circumstances, just as trying to restrict government support to particular groups (such as asylum-seekers) is counterproductive in the extreme.

Civil society also plays a crucial role in thwarting anti-democratic moves. It has been central in combating authoritarian measures, pushing back against disinformation, organizing new forms of opposition (especially online) and encouraging democratic exchanges. Increasingly, it has monitored — and called out — government improprieties, while organizing a variety of protests. These activities do not always curry favor in official circles, but they have the unquestionable advantage of reengaging citizens in the affairs of state.

Harnessing these energies from below is vital to increasing state capacities, enhancing good governance, and perhaps most importantly, substantially improving government responsiveness. Such an inclusive, pluralistic, approach goes counter to pre-coronavirus trends in Israel. Its pursuit is crucial if a further health and socioeconomic tailspin is to be averted.

Is this kind of conceptual, normative, institutional, social and pragmatic rearrangement possible at this time? Probably not, especially since differences over security issues and the future of the territories, however minimized recently in the minds of the public if not of its leaders, persist. Yet, in the same breath, how much longer can Israel carry on as the friction between social needs and government practices increases?

There is no easy panacea to the present predicament, no “messiah” who can magically turn around the economy and no obvious alternative to an increasingly inept political class. But there is a value-based course of action which has enabled a few democratic countries to successfully navigate the immense challenges of this era. A truly inclusive emergency government can take the first steps in such a direction, pending a political realignment that could elect a government dedicated to involving all segments of the country in a common effort to ensure equality, justice and peace over the long haul.